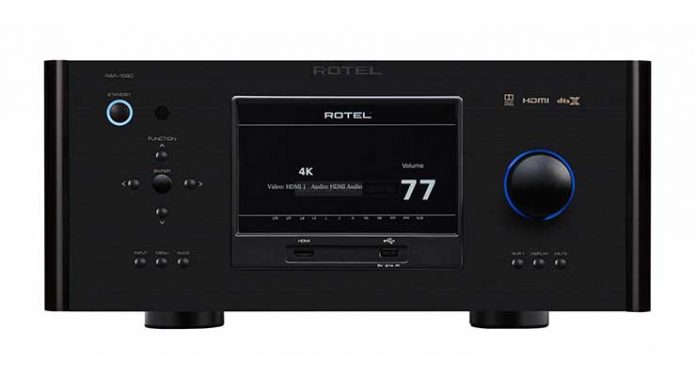 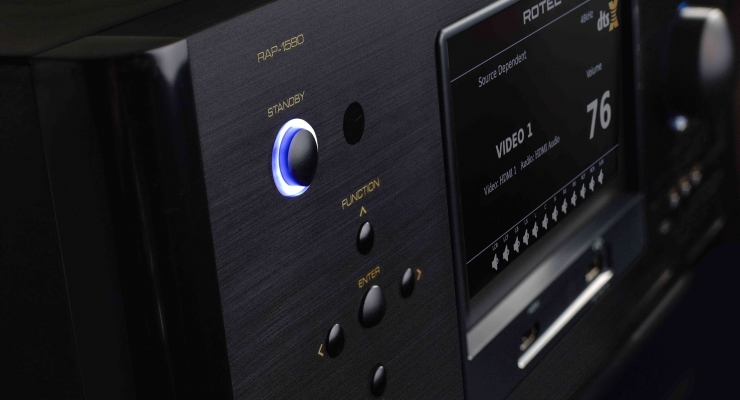 Having had a great experience with the Rotel’s flagship A/V Surround Sound Processor RSP-1582 last year, I began to wonder if this company was going to develop a no-holds-barred approach to a one-box solution that included an amplifier. I was not kept wondering very long as Rotel announced this selfsame product, the RAP-1580 Surround Sound Amplified Processor earlier this year that might just provide the best of both worlds to those for whom space is an issue.

A big box comes my way

I am fortunate to have a handyman that can snatch and lift heavy boxes at a single go so when a 52 pound hardware carton arrived at my home, a call went out to him immediately. Once we hoisted it onto my component rack, (after I removed my reference Theta Casablanca IV surround sound processor and my bevy of Pass Labs amplifiers) I hooked up my MartinLogan/Magnepan 7.1 system to the speaker taps on the back of this mini-behemoth. Before doing any listening, I sat down and read the owner’s manual all the way through. Even though I had several weeks of putting the RSP-1582 through its paces, there is a lot more going on here, so I would regard the 20 minutes invested in reading the manual as time well spent.

The façade is classic Rotel (available in silver or black). From left to right, there is a power/standby button, an IR “eye,” a four-key function panel, input selector, menu and reverse buttons, an HDMI port, a USB port for an iPod or iPhone connection sit below a 7” TFT display screen, and surround, display and mute buttons reside below an oversized volume control. There is hardware supplied for rack mounting and the blue light around the power button can be masked with a supplied circular cutout.

The rear panel is extremely busy and although similar to the RSP-1582, designates one of its two HDMI 2.2 outputs for 4K (both can output Ultra HD) and Audio Return/On-Screen Display and three of its seven HDMI inputs designated as 2.0/4K (all can receive Ultra HD signals). The next row has three optical and three coaxial digital inputs, a USB-Type B input, RS232 port, a network port, three 12V trigger inputs, a Rotel link (for connecting other Rotel brand sources), a REM IN for third-party IR remote receivers, two IR out jacks, and a power port for charging USB devices. The next row has a balanced input, and RCA inputs for a turntable (moving magnet only cartridges), a tuner, cd player, and aux. Moving toward the right are analog inputs for a 7.1 system, and for using the 1580 as a preamp-only with connections to outboard amplifiers for the 7.1 system plus two pairs of height channels for Dolby Atmos or DTS:X object-based sources. At the far right is a power switch and power cord receptacle. At the bottom are speaker taps for front, surround, center, and rear channels. Since most subwoofers are powered they will need to be connected to the analog outputs that will accommodate two of these speakers. The RAP 1580 firmware can be updated through its Ethernet connection.
One should never forget that Rotel is first and foremost an audio company and the sound playback of this surround-sound integrated amplifier has not been stinted. There are six​ Wolfson 24-bit/192kHz DACs​ arranged in stereo configuration to support the 12 channels of audio. To optimize stereo playback of analog sources, an analog bypass defeats all the digital circuits. LPCM sources up to 192kHz/24-bit can be managed as well as most currently available Dolby® modes and all DTS digital surround and high-resolution audio modes. As previously noted, both Dolby® Atmos and DTS:X are now supported. An analog bypass switch allows a stereo source to be routed directly to the volume control and outputs. Compatible Bluetooth sources can connect with an aptX Bluetooth receiver and deliver CD-quality sound.

The RAP-1580 can pass through all resolutions from 480i to Ultra HD (4K) and 3D images through any of its eight HDMI 4K inputs to either of its two HDMI 4K video outputs. A Silicon Image 2K/4K HDMI transceiver supports Color Space and Deep Color.

The Rotel RR-CX100 Remote Control unit is identical to that of the RSP 1582 and has the same soothing blue backlighting. It can operate other Rotel sources like a CD player or tuner and duplicates the front panel controls. The volume level of center, surround, and sub channels can be temporarily adjusted. There is a central control pad for use with an On-Screen Display, the preferred way of navigating the set up of this unit. Individual video and audio inputs can also be selected.

Like the RSP-1582, the RAP-1580 is a sophisticated and complex component. Starting with a Main Menu Setup Screen, you will next be guided to a number of other screens for the following functions:

Since my set up is not yet capable of reproducing the object-based soundtrack formats, I could not assess these features although, judging from experience with Rotel products, they should work flawlessly with those having such systems. I also do not have a 4K (UHD) display but passing those signals is now a common feature on all new SSPs so this should not prove to be a problem either for those that own these sets. I did all of my listening through a 7.2 system with MartinLogan CLXs in the front, a ML Illusion C34a center channel, a pair of ML EFXs for surrounds and a pair of Magnepan MG-1s for the rears. Two ML powered Balanced 212 subwoofers handled the LFEs. A Panasonic Viera TC-P65V10 1080p 2-D plasma television was used for the display.

Setting up the RAP-1580 may take up to a couple of hours, depending on the complexity of your home theater system. Also depending on your level of experience in setting up sophisticated components, it might be advisable to engage your audio dealer from the get go. I first connected and customized the properties of two inputs, for an Oppo BDP-105 Universal Disc Player, and the other an Esoteric K-01X SACD/CD player. I also connected my MacBook Air through the rear USB port.  Connecting to my network was a breeze. It is definitely worthwhile to use a SPL meter to get the speaker settings as precise as possible and, unless you change them or their positions, this is a one-time task. As with the RSP 1582, I did not set up the 10-band PEQ or parametric equalizer. This might be a daunting task for home-theater neophytes and usually requires additional equipment that many do not have. I have never been a big fan of equalizers in the signal path and most carefully sound-treated home theaters with appropriately positioned speakers should not need them.

Getting to play some righteous discs

I viewed a number of my reference Blu-ray discs including the 4K-remastered The Fifth Element, and the remastered versions of Lawrence of Arabia and Indiana Jones: Raiders of the Lost Ark. While it was difficult to assess how much, if at all, the HDCP 2.2 HDMI inputs influenced what I saw as these are not deep-color or HDR-treated discs, everything that I saw had the same superb picture quality that I got on my Theta Casablanca IV surround processor. While some might consider a bank of amplifiers capable of cranking out only 100 watts/channel when in full bore 7.1 sound a bit underpowered, there was never a moment, even with volumes at the top of my listening tolerance, when I heard any sound complaints or evident clipping.

The RAP1580’s sound performance was tested with numerous audio formats via an Oppo BDP-105 universal disc player. I popped in a number of 2L’s superb Pure Audio Blu-ray discs including the Nordic Brass Ensemble’s European Tour, a program of ancient music for brass, Trondheim Solistene’s Reflections, a collection of orchestral pieces by Britten, Vaughn Williams and Stravinsky, and Mezzotints: Chamber Music of Stale Kleiberg. In each instance, the textures, details, and sonorities of these superbly mastered discs was perfectly reproduced.

I also fed the Esoteric K-01X some nifty SACDs, including my go-to Mark Levinson: Red Rose Music, Reference Recordings WAV-formatted DVD-Rs, headlined by Joel Fan’s piano recital West of the Sun, and some hi-res Red Book CDs included the amazing 1956 Ella and Louis, a First Impressions Music hi-resolution remastering, and Patricia Barber’s Modern Cool. The onboard DACs are superb performers and I ported the RAP-1580 a bunch of hi-res downloaded files like Jimmie Lee Robinson’s All My Life, an Analogue Productions 176kHz/24-bit recording stored on my MacBook Air. I had the same essential musical experience that I had when I was reviewing the RSP-1582 surround sound processor: terrific recovery of dynamics, details, and soundstage.

To complete the listening picture, I gave the 1580 some MP3s from my iPod Classic that ending up sounding as good as this lossy format ever gets. The Bluetooth connection to my iPhone was rock-solid and provided quite acceptable CD sound and the aptX HD upgrade made a noticeable difference from what I remembered from my review of the RSP-1582 last year. Lacking moving magnet cartridges, I did not test this function but it is a nice add-on for those owning such equipment.

While Rotel touts the RAP-1580 as an excellent solution to A/V enthusiasts with limited space, it is sizeable enough to require a very sturdy shelf with overhead ventilation (it does generate a modest amount of warmth when running full blast). I would go one step further and state unequivocally that this integrated surround processor/amplifier is good enough to become the heart and soul of any high-end home theater system.

The Rotel RAP-1580 has sufficient inputs, outputs, and controls to accommodate the usual A/V sources and enough power to make them sing. The addition of Dolby Atmos and DTS:X positions the RAP-1580 for the future, and it is upgradable. While not inexpensive, its sophisticated surround sound processor and powerful multichannel amplifier leverages Rotel’s expertise in audio equipment and offers a relative bargain for those seeking the best of both sight and sound worlds.

You can find a local retailer for the RAP-1580 using the dealer locator on Rotel’s website.