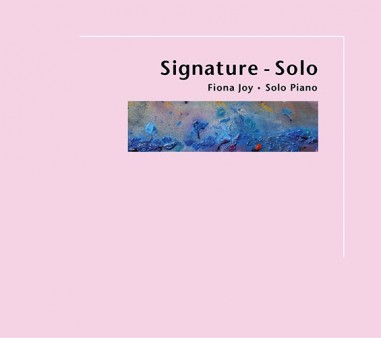 This is really a tale of two introductions. The first introduction was to Australian musician/composer Fiona Joy Hawkins who has carved out a very successful career as a pianist and vocalist. Fiona Joy’s musical influences include a diverse group of composers like pianist George Winston, British modernist Michael Nyman, and 19th century piano virtuoso, Frederic Chopin.

Returning to our artist, Fiona Joy, her latest Blue Coast release, Signature-Solo, offers the ten original tracks listed below that might be labeled as “New Age” music, but Fiona Joy would probably bristle at this categorization, as the “Down Under” has not received this genre as favorably as has the United States. New Age or not, this program offers tersely titled, beautiful, contemplative yet highly evocative music:

I did hear echoes of George Winston in some of the tracks like Ceremony, and reminiscences of Michael Nyman’s minimalist piano works in Fair Not but Ms. Hawkins really brings her own voice that will take listeners deep into the heart of her contemporary music.  The alternative version of “Once Upon Impossible,” an ethereal voice-piano duet lets us see the other side of the artist.

You should know that Fiona Joy is also visual artist and has translated many of her musical ideas into paint and canvas, in this respect, working in the opposite direction from that of Modest Mussorgsky who set Viktor Hartmann’s paintings to music in his Pictures at an Exhibition. Listening to each of the selections in this program, you will readily hear a sound palette that is truly multicolored.

DSD files are quite large, so Blue Coast recommends a download manager like DownThemAll (a Firefox-only add-on) to get these files to your computer from the site Downloads Now! (Note: I was able to access them directly via Safari).

Having heard a number of DSD files in their native format, I have been impressed by how amply DSD mastering rewards music, provided that it was well recorded in the first place. Cookie Marenco’s E.S.E. (Extended Sound Environment) recordings at Blue Coast Music never enter the PCM digital state thereby avoiding some of pulse code modulation’s potential problems of linearity, error recovery, and clipping. In this instance, the Blue Coast folks laid down most of the tracks on 2” analog tape and mixed them to 5.6MHz DSD (“Fair Not” and “Little Star” were digitized at 2.8MHz on the Sonoma System and then mixed to 5.6 MHz DSD).

The end result is an incredibly realistic presentation of the piano, an instrument that is notoriously challenging for audio engineers due to its wide dynamic range, overtones, percussive qualities, and, for lack of a better description, sheer size. Of course, Fiona Joy does not play just a piano as she made the fortuitous discovery of Stuart & Sons, a local New South Wales piano manufacturer, whose flagship model has fourteen keys that enhance both top and bottom octaves. This 102-key piano has extended range and a proprietary device that alters the strings’ vibrations. No such technical innovations would be meaningful unless the recording team captured the piano’s intrinsic sonorities properly.  Thanks to the above-mentioned E.S.E approach, Signature-Solo is not only one demonstration-quality album but one that allows us to literally see “inside” the piano itself.

All right already, which high-resolution format sounds better? As good as the DSD64 files sound (and they are mighty, mighty good), the DSD128 version is even better. To offer a commonly overused phrase, “there is simply more there, there.” The DSD128 version reveals more space, overtones, and dynamics that do justice to the piano’s sonic complexities. The best way to describe the experience of hearing this extended piano is not to laud the extra keys’ contribution, but to note how the sonic decay of the notes, enhanced by the piano’s unique vibration control, could be so clearly heard.

A PDF formatted photo of the cover art.

I have reached an age at which new recordings provide few if any epiphanies. There are increasing numbers of downloads with higher sampling rates and word lengths in the PCM domain, but these may not be the best high-resolution options for getting the most out of an analog event to the listener, and all acoustic music does begin as an analog event. As ably demonstrated by Ms. Marenco and her superb recording team, we finally get to hear some of the pent-up sonic potential of DSD for recreating the analog experience. Signature-Solo in either DSD version allows listeners to get closer to the live event, and while it may seem pricey for their 40-minute playing time (tracks can be purchased separately), think about what you paid for the last live concert that you could only attend once when you can play its near-equivalent as often as you please. Highly recommended.