Congratulations to Argo for winning the Academy Award for Best Picture on this nudiustertian night. You can read the review for the Blu-ray Combo Pack by our very own Brandon DuHamel here. See below for more details. 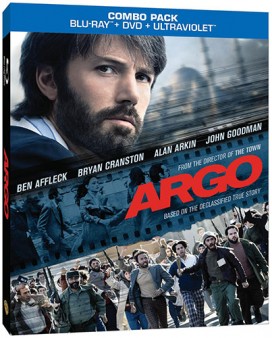 Blu-ray Combo Pack includes an extended cut of the film featuring scenes not seen in theaters
and more than 4 hours of bonus features!

Burbank, CA, January 2, 2013 – The most honored and best-reviewed movie of 2012, the Academy Award®-winning Best Picture “Argo” is available NOW on Blu-ray Combo Pack, DVD and Digital Download from Warner Bros. Home Entertainment Group.  Directed by Ben Affleck, “Argo” is based on the declassified true story of the life-or-death covert operation to rescue six Americans, which unfolded behind the scenes of the Iran hostage crisis, focusing on the little-known role that the CIA and Hollywood played. The Blu-ray Combo Pack includes an extended cut of the film, featuring an additional 9 minutes of footage that delve deeper in CIA specialist’s Tony Mendez’s personal relationships with his wife and son.

Screenwriter Chris Terrio, won Oscar® and Writers Guild of America awards for his screenplay, based on a selection from The Master of Disguise by Antonio J. Mendez and the Wired Magazine article “The Great Escape,” by Joshuah Bearman.

On November 4, 1979, as the Iranian revolution reaches its boiling point, militants storm the U.S. Embassy in Tehran, taking 52 Americans hostage.  But, in the midst of the chaos, six Americans manage to slip away and find refuge in the home of Canadian Ambassador Ken Taylor.  Knowing it is only a matter of time before the six are found out and likely killed, the Canadian and American governments ask the CIA to intervene. The CIA turns to their top “exfiltration” specialist, Tony Mendez, to come up with a plan to get the six Americans safely out of the country.  A plan so incredible, it could only happen in the movies.

“Argo” is available for download from online retailers including iTunes, Xbox, PlayStation, Amazon, Vudu and CinemaNow.

The film is also available digitally in High Definition (HD) VOD and Standard Definition (SD) VOD from cable and satellite providers, and on select gaming consoles.

*UltraViolet allows you to collect watch and share movies and TV shows in a whole new way. Available with the purchase of specially marked Blu-ray discs, DVDs and Digital Downloads, UltraViolet lets you create a digital collection of movies and TV shows. Services such as Flixster and VUDU allow you to instantly stream and download UltraViolet content across a wide range of devices including computers and compatible tablets, smartphones, game consoles, Internet-connected TVs and Blu-ray players.  Restrictions and limitations apply.  Go to ultraviolet.flixster.com/info for details.  Learn about VUDU compatible devices at vudu.com.