Chinatown on Blu-ray in April

Paramount Home Entertainment has announced the forthcoming release of director Roman Polanski’s neo-noir classic Chinatown on Blu-ray April 3, 2012 at a SRP of $24.99. 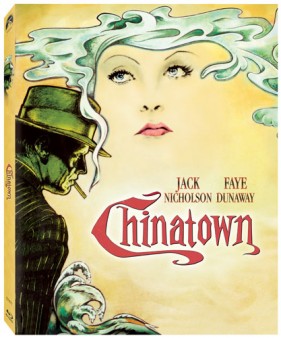 HOLLYWOOD, CALIF. —Teeming with murder, corruption, greed and sex, director Roman Polanski’s unforgettable classic CHINATOWN arrives for the first time ever on Blu-ray April 3, 2012 from Paramount Home Media Distribution.  Starring Jack Nicholson, Faye Dunaway and John Huston, the film follows an intricate web of deception as private investigator Jake Gittes (Nicholson) unravels a mystery involving water rights that are critical to the development of Los Angeles, as well as unspeakable family secrets.  Written by Academy Award® winner Robert Towne, CHINATOWN was nominated for 11 Oscars® and was named by the AFI as one of the top 25 American films ever made.

With a new high definition transfer, the CHINATOWN Blu-ray sports packaging that features the original theatrical poster and includes a collectible booklet.  The disc includes over 2 ½ hours of bonus material such as an illuminating, feature-length commentary by screenwriter Robert Towne and director David Fincher (Zodiac); an in-depth, three-part documentary on the history and impact of the Los Angeles Aqueduct and the continuing efforts to cultivate water resources for the metropolis; an appreciation of the film by prominent filmmakers; a look at the filming; an exploration of the legacy of this cinematic masterpiece; and more.

Special features are presented in high definition as indicated: