Distributor Cohen Media Group has announced the forthcoming release of D.W. Griffith’s silent film masterpiece Intolerance in a new 2K restoration on Blu-ray Disc for the first time ever on November 5, 2013. Blu-ray and DVD extras include the two full-length features drawn from INTOLERANCE: The Fall of Babylon and The Mother and the Law, accompanied by new scores by the Mont Alto Motion Picture Orchestra; a 2013 featurette with film historian Kevin Brownlow; new essays by Cineaste magazine editor Richard Porton and historian William M. Drew; and a theatrical rerelease trailer. The Blu-ray Disc will sell for a SRP of $34.98. See below for further details.

D.W. GRIFFITH’S SILENT CINEMA MILESTONE, REMASTERED
AND AVAILABLE ON BLU-RAY FOR THE FIRST TIME EVER 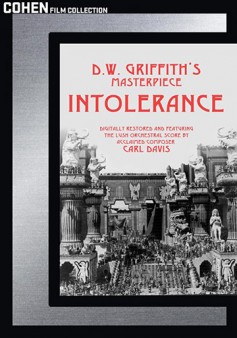 The 1916 Groundbreaking Epic About Man’s Inhumanity to Man Comes to DVD and, for the First Time, Blu-ray in a Definitive HD Edition on November 5, 2013

D.W. Griffith changed the course of film history with his 1915 Civil War blockbuster The Birth of a Nation, and spurred on by its colossal success, he went even bigger on his next epic. The ambitious and still awe-inspiring INTOLERANCE, in which the Father of Film masterfully links four centuries-apart stories of universal suffering, remains a signal achievement by any measure. Cohen Media Group’s Cohen Film Collection proudly brings this canonical 1916 work to DVD and, for the first time ever, Blu-ray on November 5, 2013. The remastered, full-length film, bolstered by a wealth of extras, will carry SRPs, respectively, of DVD $24.98 and BLU-RAY $34.98.

Stung by charges of glorifying racism in The Birth of a Nation, D.W. Griffith decided to make his next film a plea for tolerance, acceptance and understanding. An epic like nothing that came before it or has been seen since, the monumental INTOLERANCE remains as powerful today as it was almost a century ago. “Among the most influential films in screen history” (The American Film Institute), this major innovation in screen narrative tells four stories in parallel about social injustice and the effects of intolerance through the ages.

“The Modern Story,” about a working man wrongly accused of a crime, was later issued as a separate film (The Mother and the Law, 1919). “The Judean Story” tells of Jesus’ conflicts with the Pharisees and Rome. “The Medieval Story” is about the effects of the massacre of 16th-century French Huguenots. “The Babylonian Story,” about the conquest of Babylon by Persia, also was issued later as a separate film (The Fall of Babylon, 1919). Skillful cross-cutting (Griffith was the technique’s most renowned practitioner), and linking shots of a figure representing Eternal Motherhood rocking a cradle, bring all four stories to a tense climax.

Wishing his principal characters to be seen as emblematic of human types rather than individuals, Griffith gives them no names but instead refers to them as the Dear One, or the Boy, or the Musketeer of the Slums, or the Mountain Girl.

With the profits from The Birth of a Nation, Griffith spared no expense on INTOLERANCE, constructing huge sets and hiring thousands of extras for spectacular crowd scenes; the most iconic representation of this lavishness remains the sequence set at the immense walls of Babylon.

Many of the leading stars of the silent screen appear in the film, including Griffith regular Lillian Gish, Mae Marsh, Elmo Lincoln, Robert Harron and Constance Talmadge.

The famed film critic Pauline Kael called INTOLERANCE “perhaps the greatest movie ever made. … It is charged with visionary excitement about the power of movies to combine music, dance, narrative, drama, painting and photography – to do alone what all the other arts together had done.” Speaking of Griffith’s abiding influence on all who followed him, Orson Welles said, “No town, no industry, no profession, no art form owes so much to a single man.”

INTOLERANCE also proved to be an important training ground, with several of its assistant directors going on to important directing careers of their own, including Victor Fleming (The Wizard of Oz, Gone With the Wind), Allan Dwan (Sands of Iwo Jima), Sidney Franklin (The Good Earth) and Tod Browning (Dracula, Freaks).

The Cohen Film Collection presents INTOLERANCE in a new 2K restoration. The musical soundtrack is in mono for the DVD and 2.0 LPCM for the Blu-ray. Carl Davis’ orchestral score is in 5.1 Dolby Digital.

Blu-ray and DVD extras include the two full-length features drawn from INTOLERANCE: The Fall of Babylon and The Mother and the Law, accompanied by new scores by the Mont Alto Motion Picture Orchestra; a 2013 featurette with film historian Kevin Brownlow; new essays by Cineaste magazine editor Richard Porton and historian William M. Drew; and a theatrical rerelease trailer.