Twentieth Century Fox Home Entertainment has set an April 7 release date for director Scott Derrickson’s remake of the classic 1951 sci-fi classic The Day the Earth Stood Still on Blu-ray Disc (BD) set to arrive day-and-date with its DVD counterpart, starring Keanu Reeves and Jennifer Connelly. And for a limited time, both the BD and DVD versions of the  film are packaged with a copy of the 1951 classic that influenced generations of sci-fi enthusiasts, authors and filmmakers. 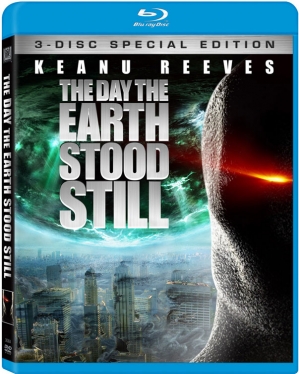 The Three-Disc Special Edition Blu-ray is presented in a 2.45:1 aspect ratio with English 5.1 DTS-HD Master Audio 5.1  and French and Spanish Dolby Digital 5.1 sound with English, Cantonese, French, Korean, Mandarin, Portuguese, and  Spanish subtitles.  As mentioned above, it will be packaged with the original 1951 version of the film and the Blu-ray edition and Three-Disc DVD Special Edition will also come bundled with a Digital Copy.

Additionally, The Day the Earth Stood Still on Blu-ray Disc will feature these bonus features:

The Three-Disc Special Edition Blu-ray of The Day the Earth Stood Still will have an SRP of US$39.99/CDN$49.99 and will be available April 7, 2009, but is already available for pre-order.

Shop with Us for More Titles at Amazon.ca