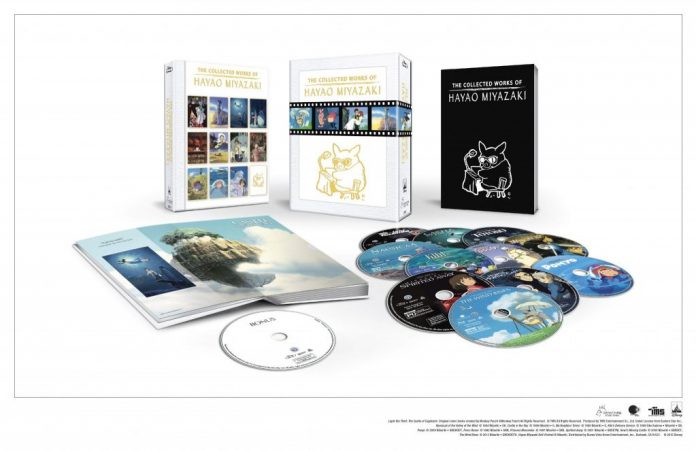 Attention everyone! If you were thinking about importing any the Miyazaki titles from Europe you need to hold off a bit,  because the entire catalog is coming to Blu-ray, EXCLUSIVE special features. Keep reading for all the details!
You can also read our review of the UK release of The Hayao Miyazaki Collection.

For the First Time Ever in North America, Academy Award®-Winning Director Hayao Miyazaki’s Films Come Together in a Single Collection 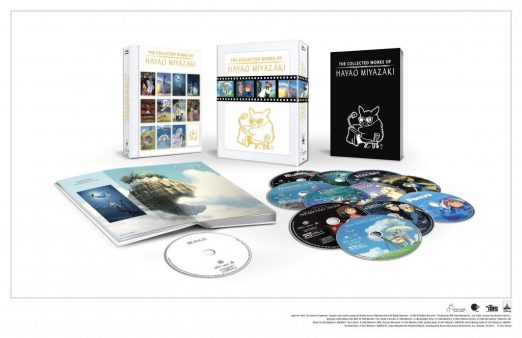 THE COLLECTED WORKS OF

Available on Blu-ray™ Exclusively via Amazon.com on November 17, 2015

The Collection includes a 1972 TV Pilot Directed by Miyazaki, Three Episodes from the

About: Experience the majestic works of one of the most celebrated filmmakers in the history of animated cinema. Hayao Miyazaki weaves his unique style of artistry and epic adventure into astonishing tales of triumph, bursting with imagination and wonder.  For the first time, enjoy all 11 of Miyazaki’s feature-length masterpieces in one spectacular 12-disc collection, complete with hours of captivating bonus features and the Academy Award®-winning Spirited Away(2002, Best Animated Feature Film).

Studio Ghibli was founded in 1985 by animated film directors Isao Takahata and Hayao Miyazaki, and has produced twenty-one feature-length films. Most Studio Ghibli films have ranked number one at the box office in Japan in the year in which they were released. SPIRITED AWAY, directed by Hayao Miyazaki and released in 2001, is the all-time highest grossing film in Japan, earning over 30 billion yen at the box office. The studio’s SPIRITED AWAY (2001) and HOWL’S MOVING CASTLE (2004) are among Japan’s top 5 highest grossing films. Studio Ghibli films have garnered numerous awards and critical acclaim from critics and animation specialists around the world. SPIRITED AWAY was awarded the Golden Bear for Best Feature Film at the 2002 Berlin International Film Festival and won the Oscar® for Best Animated Feature at the 2003 U.S. Academy Awards®. In October 2001, Studio Ghibli, in conjunction with The Tokuma Memorial Cultural Foundation for Animation, founded the Ghibli Museum, Mitaka, designed by Hayao Miyazaki. Studio Ghibli’s film, THE WIND RISES, written and directed by Hayao Miyazaki, was released in Japan on July 20, 2013, and was nominated for the Oscar® for Best Animated Feature.  In 2014 Hayao Miyazaki was presented with an Lifetime Achievement Award “Oscar” award by the Academy of Motion Picture Arts and Sciences.  THE TALE OF THE PRINCESS KAGUYA, directed by Isao Takahata, opened in Japan on November 23, 2013, and was nominated for the Oscar® for Best Animated Feature.  WHEN MARNIE WAS THERE, directed by Hiromasa Yonebayashi (director of ARRIETTY), opened in Japan in July 2014.

For over 90 years, The Walt Disney Studios has been the foundation on which The Walt Disney Company was built. Today, the Studio brings quality movies, music and stage plays to consumers throughout the world. Feature films are released under the following banners: Disney, including Walt Disney Animation Studios and Pixar Animation Studios; Disneynature; Marvel Studios; Lucasfilm; and Touchstone Pictures, the banner under which live-action films from DreamWorks Studios are distributed. The Disney Music Group encompasses the Walt Disney Records and Hollywood Records labels, as well as Disney Music Publishing. The Disney Theatrical Group produces and licenses live events, including Disney on Broadway, Disney On Ice and Disney Live!