Princess and the Frog Coming to Blu-ray Combo Pack

Walt Disney Studios Home Entertainment has announcement that they will be bringing their hand-drawn animated hit The Princess and the Frog to Blu-ray Combo Pack day-and-date with the DVD release on March 16th, 2010.

The hand-drawn animated film marked a historic achievement for the studio being both the studio’s re-entry into the world of hand-drawn animated feature length films after nearly a decade’s absence from the genre and the first time a Disney film has featured a black princess. The Princess and the Frog features a jazz-inspired musical score from composer Randy Newman and classic hand-drawn Disney animation from the team of John Musker and Ron Clements (Aladdin, The Little Mermaid).

Exclusive bonus features include games and specially- created featurettes that take viewers on a once-in-a-lifetime tour of the storied French Quarter of New Orleans. The Blu-ray features a 1.78:1 1080p high definition transfer with an English DTS-HD Master Audio 5.1 soundtrack and English SDH, French and Spanish Subtitles. 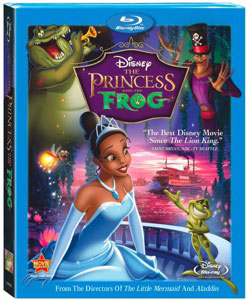 Bonus features for The Princess and  the Frog include:

The Princess and the Frog Blu-ray Combo Pack will sell for an SRP of $44.99.