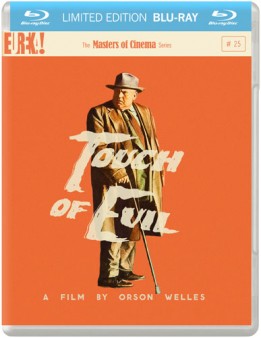 Heston the Masters of Cinema special treatment when it releases  the film under its vaunted imprint on a special 2-Disc Blu-ray only release and HMV Exclusive  2-Disc Blu-ray Steelbook on 14 November 2011.

Touch of Evil begins with one of the most brilliant sequences in the history of cinema; and ends with one of the most brilliant final scenes ever committed to celluloid. In between unfurls a picture whose moral, sexual, racial, and aesthetic attitudes remain so radical as to cross borders established not only in 1958, but in the present age also. Yet, Touch of Evil has taken many forms. The film as released in 1958 was certainly compromised from Orson Welles’ vision, but a brilliant and lengthy memo written by Welles to studio heads in 1957 – taking issue with a studio rough-cut – had some influence on a subsequent preview version shown to test audiences (and rediscovered in the mid-1970s) as well as the 1958 theatrical version. Forty years later, in 1998, Universal produced a reconstructed version of the film that takes into meticulous account the totality of Welles’ memo, and ostensibly represents the version of the film that most closely adheres to his original wishes.

Charlton Heston portrays Mike Vargas, the Mexican chief of narcotics who sets out to uncover the facts surrounding a car bomb that has killed a wealthy American businessman on the US side of the border. As Vargas investigates, his newly-wed wife Susie (Janet Leigh, two years before Hitchcock’s Psycho) is kidnapped by a gang out to exact vengeance for the prosecution of  the brother of their leader (Akim Tamiroff). Meanwhile, Vargas’ enquiries become progressively more obfuscated by the American cop Hank Quinlan (played by Welles himself, in one of the most imposing and unforgettable screen performances of his career), a besotted incarnation of corruption who alternately conspires with Susie’s captors and seeks solace in the brothel of the Gypsy madame (Marlene Dietrich) who comforted him in bygone times.

Welles’ final studio-system picture has at last become secure in its status as one of the greatest films ever made. It remains a testament to the genius of Welles –– a film of Shakespearean richness, inexhaustible.

The Orson Welles film alongside Citizen Kane often cited as the legendary director’s greatest work,  starring an incredible cast in the film they ranked among their very favourite of their careers: Hollywood stars Charlton Heston (The Planet of the Apes, Ben Hur, Soylent Green), Janet Leigh (Psycho), Marlene Dietrich (Shanghai Express, Morocco, Blonde Venus, The Blue Angel) — and Orson Welles himself in one of his most iconic roles The Masters of Cinema Series attempts to honour Welles with this special two-disc, Blu-ray only edition of Touch of Evil, with the film presented in five versions and released in the UK on 14 November 2011.  Also available in a Ltd. Edition 2-Disc Blu-ray Steelbook available exclusively from HMV.