Turbo on Blu-ray and Blu-ray 3D in November

FROM THE CREATORS OF MADAGASCAR AND KUNG FU PANDA

Perfect Gift for the Holidays, the Comedy-Adventure Arrives on Blu-ray™
Deluxe Edition and DVD November 12 with Turbo Pullback Toy Racer 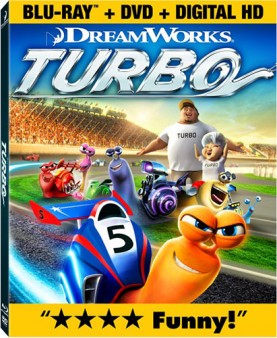 Experience big dreams and even bigger laughs when TURBO arrives on Digital HD™ on October 22 and on Blu-ray 3D™ , Blu-ray™ and DVD on November 12. Taking the fun-filled spirited adventure of the film, the Blu-ray™ and DVD are packaged with a TURBO pullback toy racer, while supplies last, making it a great gift for the holidays!

The single disc DVD includes an extra holiday gift, the TURBO pullback racer toy for a limited time while supplies last plus the following: