Win a Copy of Painted Skin: The Resurrection on Blu-ray [Ended]

We have been provided with three (3) copies of Well Go USA Entertainment’s Blu-ray release of Painted Skin: The Resurrection to offer to our readers in a new giveaway. See below for further details on the title and how to enter to win. 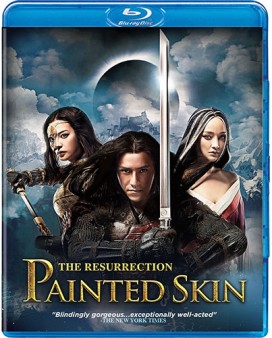 The Asian Mythical Blockbuster of the Year
PAINTED SKIN: THE RESURRECTION

Synopsis:
According to ancient lore, if a human freely offers their heart to a demon, that monster can become mortal, experiencing the true pains and passions of existence.  Xiaowei (Zhou), a millennia-old fox spirit, is freed from her frozen prison and transforms into a dangerous seductress. To maintain her youthful beauty she is forced to consume living hearts as she searches for her chance to become human. Meanwhile, Princess Jing (Zhao), hiding her marred beauty behind a golden mask, flees an unknown threat to her kingdom by pursuing the only man she ever loved: the guard who was unable to protect her so many years ago.

Bonus Feature Include:
§  “The Making of Painted Skin: The Resurrection” Featurette
§  Trailer

PAINTED SKIN: THE RESURRECTION has a runtime of approximately 131 minutes and is unrated.