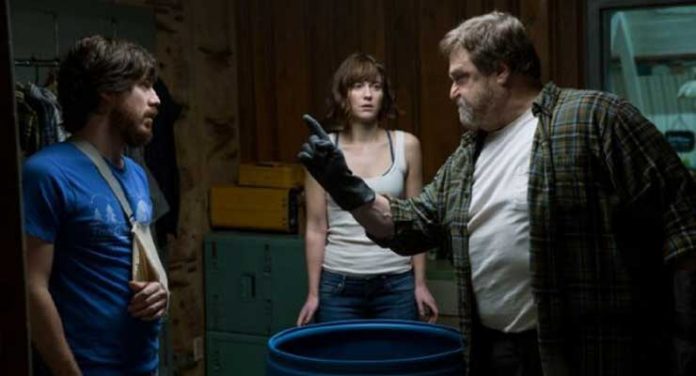 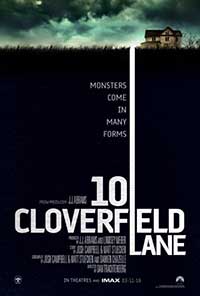 “Submitted for your approval.”

10 Cloverfield Lane is a film that has been shrouded in mystery since it began filming who knows when. It went through working title after working title and very little, if anything, was said about what the film was actually going to be about. Was it a sequel/prequel to Cloverfield, which released in 2008, as a big budget found footage monster movie? What would this version be about? Well, I will tell you and hopeful try to fill in the blanks and keep it nice and spoiler-free-ish.

Michelle (Mary Elizabeth Winstead) is a lovely young woman who has just gotten into a big fight with her boyfriend and is on the road when she gets into a horrible accident causing her to lose consciousness. She wakes up in a bunker with an IV needle in her arm and is being cared for a by hulk of a man named Howard (John Goodman). Howard claims that he rescued her from the car wreckage and took her back to his underground bunker to recover. Wait, what? An underground bunker – out of all places? Well, Howard is one of those paranoid types that built an underground bunker in case the world crumbled.

Howard fills her in on what has happened to the outside world and that there’s nothing left except fallout and destruction. Me thinks Howard has more than a few screws loose. Joining Howard and Michelle in this impressive bunker is Emmett (John Gallagher Jr.), a lucky “survivor” from the doom of the outside world. He was there before Michelle arrived and has just a bit more insight into what’s going on – and by insight I mean just what Howard has told him. It’s basically the USA has been bombed to hell by its enemies or aliens. Take your pick.

10 Cloverfield Lane is a mighty little film made on what some might consider a low-budget – 5 million dollars or so. Every cent is up on that screen. The production design is fantastic and the music score by Bear McCreary is now one of my favorites. There’s a nice claustrophobic, Hitchcockian undertone to the film that I appreciated. The film was shot in about a month and it looks and sounds amazing. I actually saw the film in my local theater’s smaller auditorium in a packed house and that bass tone management was phenomenal. I can’t wait for the Blu-ray.

Now, this is the part of the review that you can either skip or take to the end, because I will speak on the connections or lack thereof to 2008’s Cloverfield. So as most have already seen 10 Cloverfield Lane shares a similar moniker to the giant monster movie from a few years ago. That’s actually where the similarities end. I went into the film thinking that this would be a “side-quel” or spiritual sequel to that film but I was wrong on both counts. I should also point out that I have never seen a single episode of Lost, therefore thematically (based off of Lost) I can’t comment on the show and it’s possible similarities to 10 Cloverfield Lane.

It looks like J.J. Abrams and company have created a Twilight Zone-ish anthology revolving around the title of “Cloverfield” more than anything else. One could see it as a compact anthology revolving around the title and that the films actually stand alone. 2008’s Cloverfield is its own separate film, and at this point whether we get a sequel or not, does not matter, the same with 10 Cloverfield Lane. Both films stand or their own. J.J. Abrams has stumbled on (or smartly made a decision) a really cool concept of the small to moderately budgeted anthology film sub-genre. Here’s hoping that we get more at a more constant rate, because 2008 to 2016 is a long time. I want more of this newfound “anthology” series,  assuming it is to continue. The blend of thriller, drama, science fiction, horror, etc., all work to its favor. By the way, the cast was phenomenal and I would not be against some award recognition for John Goodman because he stole the show.