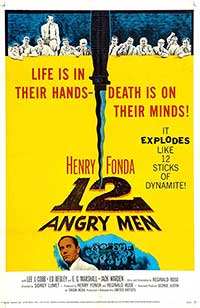 12 Angry Men is a film that has to do with twelve people who are to decide the fate of an 18-year-old kid accused of his father’s murder.

Twelve jurors, people from different social classes and different kinds of professions, are about to decide whether an 18-year-old is the murderer of his father or not. If he is found guilty, the punishment will be the death penalty. It appears to be an easy case, with everyone except for Juror 8, being completely sure that the guy killed his father because of the violent outbursts of his father. In general, there appears to be a lot of prejudice against him, because of the defendant’s incidents of juvenile delinquency in the past, his detention during his younger years and the slum where he lived. However, Juror 8 shows his doubt of whether the defendant was actually the murderer and invites the rest of them to engage in a deep conversation thoroughly investigating the clues in the hope of changing their minds.

I really enjoyed the plot structure of the film and the way the hidden clues are combined with the characteristics of each juror’s life. In fact, it highlights the importance of pluralism, because every juror understands things through personal experiences, special characteristics, and age. Also, it shows how significant it is that jurors take their duty seriously, and not make quick decisions, judging only by the surface. What I also found interesting, is that the movie put some emphasis on the lawyer of the defendant, who maybe was not motivated or skilled enough to provide the court with sufficient arguments, which is also another issue. The use of dialogue was very sophisticated and it made the movie even more intriguing.

Although it is very hard to choose for the best performances, as the cast did a very good job, if I were to decide for my top 5 I would opt for:

Generally, the characters/ jurors are distinguished from each other mainly because of some particular details, like for example Juror 4 (played by E.G.Marshall) wearing glasses, Juror 5 (by Jack Klugman) having grown up in a slum, Juror 12 (by Robert Webber) for working in marketing/ management and Jurors 9 and 10 (Joseph Sweeney and Ed Begley respectively) for being elderly.

Director Sidney Lumet was really good at establishing the details that made the film’s atmosphere unnerving, like the excessive heat and the rain. The fact that it takes place within the walls of a room small room makes it feel claustrophobic and more intense. There is a scene of the interior of the court at the beginning and in the end, we see parts of its corridors and the building’s exterior, with the cinematography generally being restricted to the room where the discussions among the jurors take place.

I was not fully satisfied with the ending, as I wanted to see the announcement of the verdict as a scene, still it does not affect the opinion I have for this film. For me, the ending is a mixture of back to square one in terms of cinematography with a tone of resolution and humor.