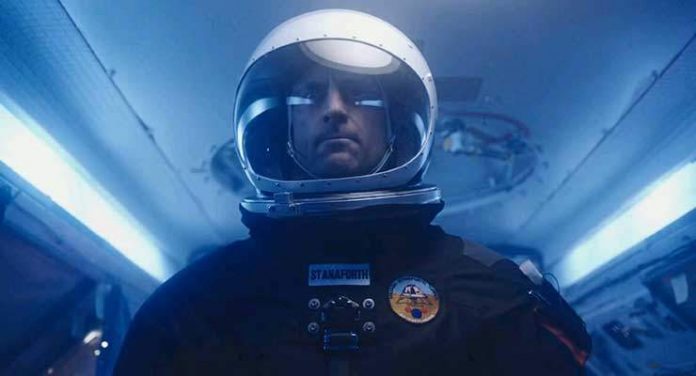 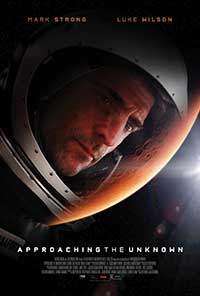 Hot on the heels of mega-juggernaut films like Gravity, Interstellar, and The Martian many filmmakers and various studios are taking note and exploring the cosmos in other tales of potential awe and wonder. Approaching the Unknown has Mark Strong portraying Captain William D. Stanaforth, the lone astronaut on a one-way trip to Mars for colonization.

Stanaforth is launched into space and is at the peak of his physical and mental prowess. We’re shown as he exercises to keep fit, bathes to stay clean and sanitary around his surroundings, and has occasional communications with Houston- 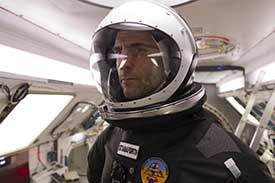 control. Stanaforth is also a scientist and inventor having invented a machine that he has on-board that takes any kind of dirt and converts it to drinkable and life sustaining water, which he does and uses to water his plants in order to grow and cultivate his food. To use a pun from another like-minded film from recent memory: he definitely “science” the sh*t out it.

The mission was set up as a multi-year mission and as it moves on the “cabin fever” sets in and Stanaforth begins to ultimately question his motives on going to Mars. Why now, why him, what for, etc. Things really begin to go by the wayside when he starts to have conversations with mystery crew members that he did not know where even on his ship like one of the ship’s engineers. Is it real or has the psychosis set in? 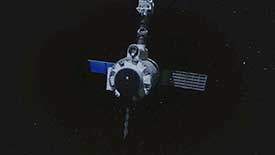 As Stanaforth gets closer and closer to landing on the red planet the ultimate goal of actually making it in one piece seems to dissipate. If it’s not one malfunction after it’s something else. This also causes a crisis at launch-control, because if anything out of the ordinary happens that can endanger the mission – protocol requires that the mission be aborted and that Stanaforth come back home. Granted, when you’re three quarters of the way there aborting the mission and coming back home is rather unlikely. There’s no turning back.

Ultimately, I liked Approaching the Unknown enough. It wasn’t great, but it;s horrible. It fills the middle 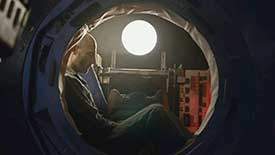 ground appropriately, but acts as a more abstract piece of space travel – one can almost say that Stanaforth, and we the viewer, are in an existential journey through the cosmos that it almost makes Mars look like an afterthought. Approaching the Unknown is the feature film-writing début of Mark Elijah Rosenberg. The budget is obviously low, but since we have a limited cast of characters production values and visual effects look top-notch and Mark Strong is captivating in what is essentially a one-man-show.

After watching the film I did feel satisfied with the outcome ,but then I remembered a couple of scenes that may or may not have been disguised or showcased using some clever editing techniques. I will not go into details, because they can be considered spoilers.

Approaching the Unknown is available for rental and purchase via various digital platforms and is playing in limited theatrical release. I’ll say it’s definitely worth a rental – but it may divide audiences in terms of entertainment value.

Approaching the Unknown (TheaterByte Movie Review)
3 / 5 TheaterByte Rating
{{ reviewsOverall }} / 5 Users (0 votes)
3311 Productions, Loveless, Rooftop FIlms, Paramount Pictures, Vertical Entertainment, Tiderock MediaStudios & Distributors
R (for language)Rating Certificate
USACountry
EnglishLanguage
90 Mins.Run Time
1.78:1Aspect Ratio
Mark Elijah RosenbergDirector
Mark Elijah RosenbergWriter
3 June 2016 (limited, VOD)Release Date
The Film
Summary
Approaching the Unknown is an existential space opera of a film that sticks to its guns and has our main character questioning everything about life, Earth, Mars, etc. It's a metaphor for self-exploration and the furthest reaches of experience. It can be a bit hard to relate to the film and situations, but there are nice visuals and Mark Strong puts on a tour de force performance. For genre fans only.
What people say... Login to rate
Order by: