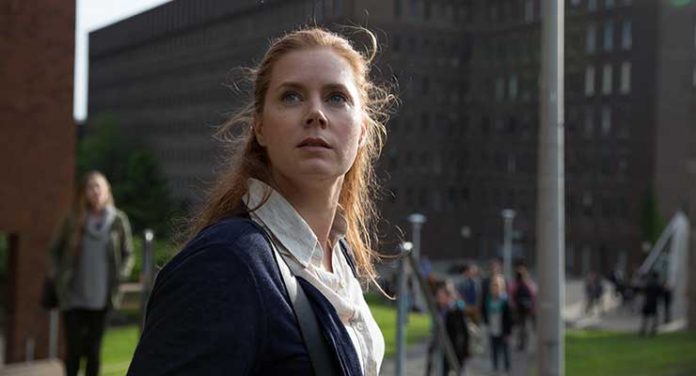 Perhaps I should begin with the kind of film Denis Villeneuve’s (Sicario) Arrival is not. It is not Independence Day, War of the Worlds, The Fifth Wave or Close Encounters of the Third Kind. It is not Gravity nor is it The Martian. While Arrival could be easily pigeonholed into any of these sci-fi or fantasy categories, it is a film in which such aspects seem almost peripheral to the central themes in this adaptation of Ted Chiang’s The Story of Your Life. Before diving into this film, it is helpful to explain the Sapir-Whorf hypothesis that plays an important technical role in the protagonists’ assigned task of translating an extraterrestrial language. Simply stated, this theory proposes that the structure of a language shapes the essential thoughts and worldviews of those that speak it be they humans or aliens.

Arrival opens with twelve black ovoid “shells” hovering over different locations around the Earth. World-renowned linguist Dr. Louise Banks (Amy Adams, American Hustle) has  recently lost her daughter Hannah (played at various ages by Abigail Pniowsky, Jadyn Malone, and Julia Scarlett Dan) to cancer. She and theoretical physicist Ian Donnelly (Jeremy Renner, Captain America: Civil War) are recruited by Colonel G.T. Weber (Forest Whitaker, Southpaw) to join an élite scientific team. Banks and Donnelly are helicoptered to visit a “shell” located in the Montana wilderness. The pair is then assigned to engage the 7-tentacled aliens or “heptapods,” and to establish lines of communication with them that will help to explain the reason for their mysterious arrival. 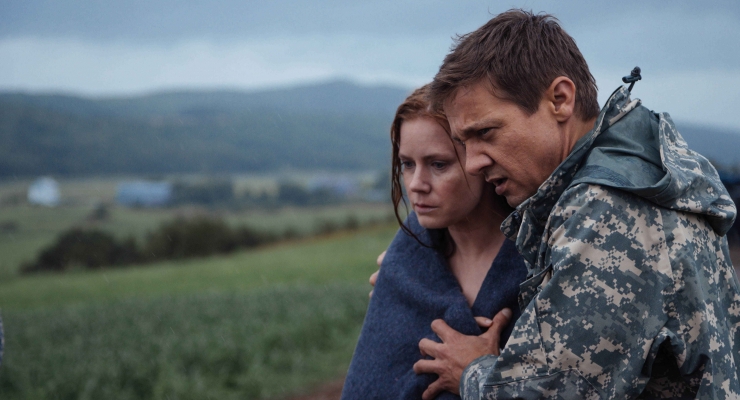 Louise and Ian makes regular visits to the shell and start to decipher the complex circular glyphs that make up the heptapods’ written language. During this process of understanding the expanding lexicon of symbols, Louise starts receiving random dream sequences of herself with Hannah at different stages of her daughter’s life. Although Drs. Banks and Donnelly make steady progress, the world situation outside of the Montana base camp is rapidly deteriorating. China, Russia, and other national powers have ceased communicating with the rest of the world and, in total isolation, are deciding the best methods to deal with the aliens. Louise begins a race against time to prevent a possible global catastrophe once she and Ian have uncovered the real purpose of the aliens’ visit.

While, on the surface,  Arrival might appear to be a suspenseful tale clad in the trappings of science fiction, its real purpose is to ask existential questions.  Would precognition, were it possible, affect major life decisions and could the understanding of a completely unfamiliar language change one’s view of a previously familiar world?  Director Villeneuve has done a very skillful job of pacing Eric Heisserer’s (Nightmare on Elm Street) faithful adaptation of Chiang’s thought-provoking short story. Not counting the heptapods, nicknamed Abbott and Costello, this is Amy Adams’s film from start to finish. A very accomplished actor, Adams completely inhabits a character whose dramatic trajectory is complicated by a  storyline that occasionally blurs the distinction between  past, present and future. Jeremy Renner is the perfect science wonk while film veteran Forest Whitaker’s play-it-by-the-book Army officer is spot on. Bradford Young (Selma) delivers cinematography that is mostly indoors, often intimate, and particularly moving. Unlike most contemporary sci-fi flicks, the CGI special effects do not overwhelm the dramatic essence of this movie. Potential viewers will be talking about the moral and ethical issues posed by Arrival long after they have left the theater. One of the best films that I have seen this year and a potential Oscar-winner for Amy Adams.