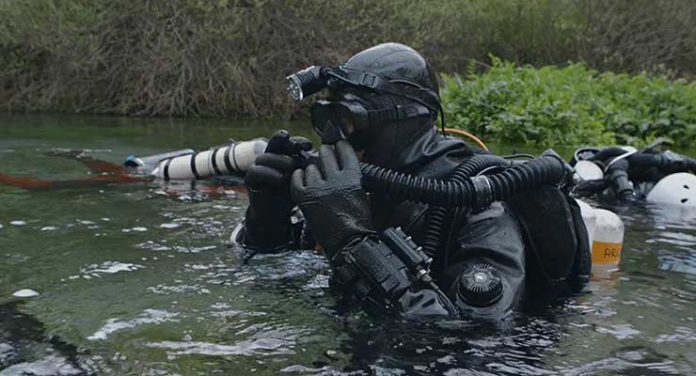 You may not be aware of this, but cave diving is one of the most demanding and dangerous past-times on this planet. Writer/director Juan Reina presents the potential perils of this extreme sport in his documentary Diving into the Unknown. The inspiration for this film came in 2010, when two divers, Antti Apunen and Janne Suhonen, who had just written “Divers of the Dark”, approached Reina. In the director’s own words: “It occurred to me that cave divers and astronauts are really the last true explorers in the world today. Going deep inside these caves means having to rely solely on their own skills, as no GPS or other devices can reach those depths.”

A month before the film opens, there has been a tragic accident involving a team of divers that were preparing to set a new world record in Plurdalen, Norway for the longest cave dive. The group included Patrik Grönqvist, Kai Känkänen and Vesa Rantanen, the divers who survived the accident that claimed two of their companions, Jari Huotarinen and Jari Uusimaki. Sami Paakkarinen who trained the two dead divers joins the three survivors on a mission to recover their deceased friends’ bodies, a mission deemed too dangerous and therefore illegal by the British and Norwegian officials.

The tension begins to mount, as the recovery dive team carry out their sub rosa mission. The film crew with its two cameramen and four underwater cameras had to work some clandestine miracles to film a hidden world that few people ever see in their lifetimes. 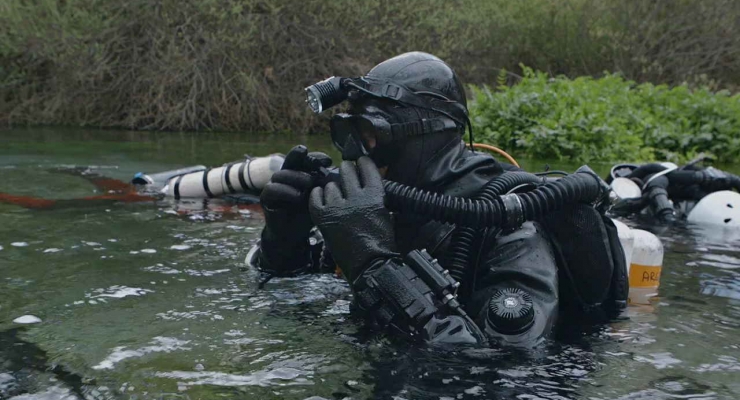 We find out that the three surviving divers continued to lead their lives after the fatal accident. Officer Patrik Grönqvist eventually received a medal from the president of Finland and the charges against the diving team were dropped.

What emerges at the core of this film is the attention to detail as each of the men prepares for the recovery mission. Viewers get to share their personal fears, doubts, and efforts to reduce the risk of failure and death although these two concerns are ever-present. As the planning proceeds, the divers begin to decide what to recover besides the bodies, as any retrieved equipment could bring in much-needed money for the families of the dead men.

The team assembles and makes their journey through the underwater cave to the final resting places of their fellow divers. A combination of incredible underwater photography and sound effects begin, as the divers forge through some very tight places and loose rocks, exposing viewers to the real risks of cave diving. Kai eventually leaves the team so we are down to Patrik and Sami. The grim task of recovering the bodies now begins in earnest and when the divers succeed, their brief celebration is tempered by the profound sense of closure now that they have brought back their lost friends.

There are reality films and then there are reality films. This one probes the innermost emotions of the divers who consider the dangers of their extreme sports pursuit and the intrinsic value of their mission. Director Reina should be justifiably proud of his début feature-length documentary film for its honest approach, tactful probing its protagonists’ psyches, and the amazing cinematography produced by the cameras of Jarkko M. Virtanen and Tuukka Kovasiipi. Rounding out the credits is a terrific New Age film score by renowned Norwegian composer/performer, KAADA (John Erik Kaada). A very difficult subject that receives topnotch cinematic treatment, Diving into the Unknown is highly recommended and will be screened at the DOC NYC film festival beginning on November 17, 2016.