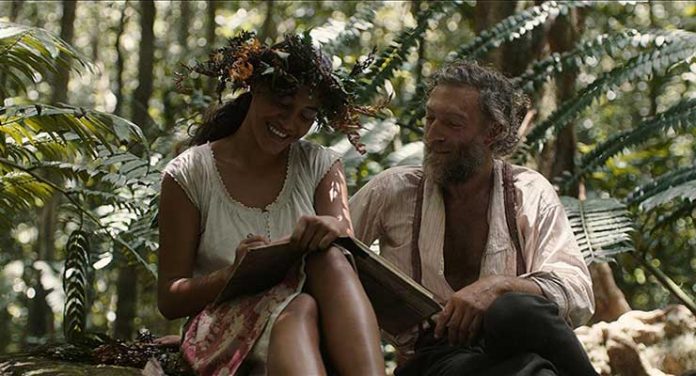 French painter Paul Gauguin bridged the gap between late 19thcentury impressionism and early 20thcentury modernism.  Gauguin was best known for his colorful paintings of the indigenous people of French Polynesia and Gauguin: Voyage to Tahiti focuses nearly exclusively on the two years he spent on the island where he developed his “postimpressionistic” style. As the film opens, the financially strapped painter(Vincent Cassel) has moved his Danish wife Mette (Pernille Bergendorff) and their five children into a cramped Paris apartment. Art dealer Hector (Scali Delpeyrat) tells him that his paintings are not selling so Gauguin comes up with the idea to move to Tahiti and get new inspiration. Paul eventually scrapes together funds from the fortuitous sale of his paintings to pay for his voyage but his long-suffering wife refuses to go with him although she will send money whenever possible.

After bidding what will be a final farewell to his family in April of 1891, Gauguin arrives in Papeete with a threadbare wardrobe but a full supply of art materials. Three months later, he saddles up and heads for the interior of the island to establish his “studio” and home in a bamboo hut. When the painter gets hospitalized after a heart attack, a concerned Dr. Henri Vallin (Malik Zidi) warns him that if he does not eat a proper diet for his diabetes, he will not live longer.

Having recovered and starting to paint again in his new “primitive” style, featuring vibrant colors and bold outlines, Gauguin finds his muse, the young Tahitian “vahine” Tehura (Tuhei Adams). After receiving Mette’s letter stating her intention to divorce him, Gauguin takes on Tehura as his lover. An archetypal “starving artist,” he resorts to working menial jobs to put bread on their table and begins to teach Tehura how to speak French. Clouds gather over their cozy carnal relationship, as Jotepha (Pua-Tai Hikutini), a handsome young neighbor, takes more than a passing fancy in Tehura. To make matters even worse, Jotepha is now earning decent money by selling “native” woodcarvings that Gauguin showed him to make, while the artist himself is destitute.

Gauguin: Voyage to Tahiti concludes with Gauguin’s return to France in 1893, although he did live for another decade and returned to Polynesia, eking out a living from his Tahitian paintings.  Ignoring revisionist history regarding Gauguin’s illness (more likely due to advanced syphilis), his common-law bride being only thirteen years old, and the entirely fictitious Tahitian love triangle, there only a few reasons to watch this film. These include Cassel’s intense, self-absorbed portrayal of a troubled genius, the luminous Tuhei Adams in her big screen debut, and veteran cinematographer Pierre Cottereau’s stunning visuals of Tahiti’s natural vistas.

On the other side of the ledger is a plodding, angst-ridden script, courtesy of director Edouard Deluc and three other screenwriters. There are numerous longueurs and an over reliance on sweaty facial close ups in lieu of dialogue. As far as “art” films go, Gauguin is better than the other niche entries about this artist including Oviri and Paradise Found respectively starring father and son Sutherland, Donald and Kiefer. My ultimate frustration with this latest Gauguin biopic is that it could have been so much better, given the seductive backdrop of Tahiti where it was principally filmed.  Still, for those viewers who value form over substance, Gauguin: Voyage to Tahiti offers enough visual enticements to encourage a visit to this lovely location. As an art imitating life sidebar, 50-plus year old Cassel had a two-year romantic relationship with then 20 year-old Sicilian model Tina Kunakey.