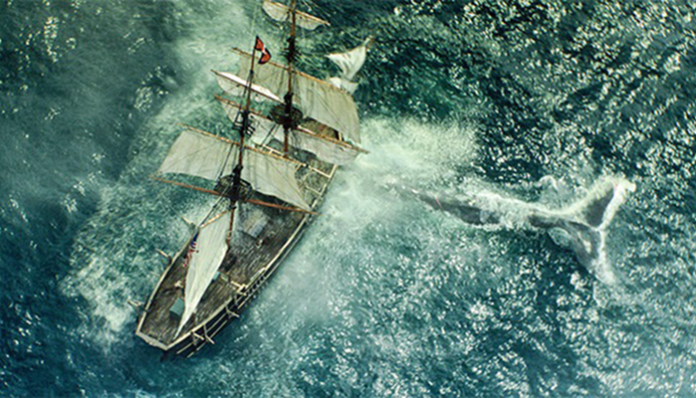 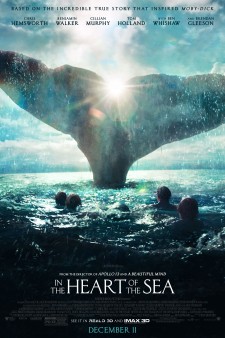 Director Ron Howard and actor Chris Hemsworth’s previous collaboration Rush was the true story of two Formula One racing rivals, and the film had lots of pulse racing car races. In the Heart of the Sea does better in telling the real-life maritime disaster that would inspire Herman Melville’s book Moby Dick, the whale that roamed around in the Pacific Ocean and caused the deaths of many shipmen. In the Heart of the Sea reveals the aftermath of the ship’s crews disastrous meeting with the whale, how they survived at sea for over 100 days, braved storms, starvation, blazing sun and doing the unthinkable, to survive. It’s a movie that could’ve been sunk by any other director, but Howard, who also directed ‘Apollo 13’ and ‘Beautiful Mind,’ finds himself in another category altogether with this film, it’s a superbly directed action adventure film based on Nathaniel Philbrick’s best-selling 2000 book In the Heart of the Sea: The Tragedy of the Whaleship Essex. 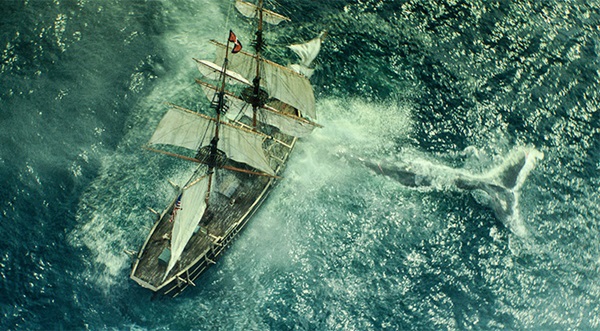 The cast and crew make this film a believable tale of a whaling ship called the ‘Essex’ that goes out to sea in search of whales for oil. It’s led by inexperienced captain George Pollard (Benjamin Walker), but First Mate Owen Chase (Hemsworth) is more qualified than him to be in charge of the ship. Cillian Murphy plays Second Mate Matthew. ‘In the Heart of the Sea’ is told not through the eyes of any of these men but it’s told by seaman Tom Nickerson, who was 14-years old when he was on the crew of the Essex. He relays this epic story to novelist Herman Melville (Ben Whishaw) 30 years later. Melville would go on to write a book about the catastrophic event called Moby Dick.

While Moby Dick is a work of fiction, In the Heart of the Sea brings to life the true epic journey that begins in 1820 in New England when the whaling ship Essex leaves it’s port to embark on a journey that would find it sailing to the southernmost tip of South America, where it would encounter a whale the size of enormous proportions. It’s a whale that turns on them, and soon enough the hunters become the hunted. And there’s tension between Pollard and Chase; Chase being the more experienced seaman leads the seamen almost every step of the way, however Pollard’s inexperience causes him to make some bad decisions, decisions which endanger the lives of the crew. It’s up to Second Mate Joy to try and smooth the waters between them. And also on the boat is the young 14-year old Nickerson (played by Tom Holland), experiencing his first whaling expedition, and probably the first time out on his own. He’s witness to the catastrophic unfurling events that take place, not just with the whale but also sailing, along with some of the other men, on a lifeboat on the open seas, and surviving to tell the tale. Thirty years later, as the last survivor of the Essex, he’s reluctant to relive the story, but Melville, in the film’s fictional account, get’s Nickerson to tell his story. And what a story it is.

In The Heart of the Sea is an incredible journey of survival and the lengths a man is willing to go to save his own life and the lives of others. We are literally transported to another time and place, and for 121 minutes (which fly by), we are taken on a convincing and incredible ride. Hemsworth does a fine job as Chase, though he’s a bit smug and too good looking for the role. Murphy ups the acting stakes as the loyal and determined Second Mate Joy – he’s got a strong will to live but his body is telling him otherwise . And the whale; it’s a living presence in the film. It’s always lurking in the background, and it looks very real. But credit goes to Howard for allowing us to be swept up into the drama and action as it’s happening. In the Heart of the Sea is one of the best films of the year.