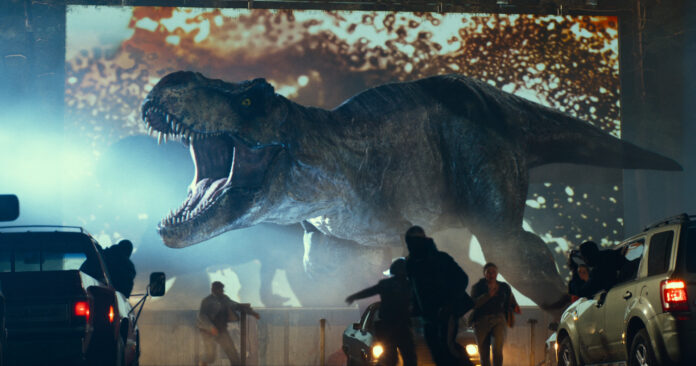 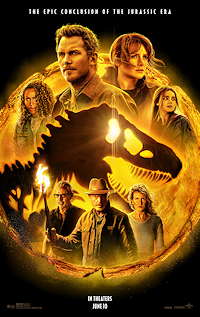 Four years later, dinosaurs freely roam the planet while Claire, Owen, and Maisie live in a secluded cabin in the Sierra Nevada mountains. Blue suddenly emerges from the woods with her baby whom Maisie names Beta. Maisie and Beta are kidnapped by men working for Lewis Dodgson (Campbell Scott), the wealthy owner of Biosyn, a crooked corporation that manipulates the DNA of its creations, in this case giant locusts generated by Dodgson’s chief scientist Henry Wu (B.D. Wong) to destroy all non-Biosyn crops. Ellie Sattler (Laura Dern) a paleobotanist joins her former lover Alan Grant (Sam Neill) to stop Biosyn from taking over the world’s food supply.

In Malta, Claire and Owen find that Beta and Maisie are en route to the Biosyn headquarters in the Dolomite Mountains. Fortunately, pilot Kayla Watts (DeWanda Wise) agrees to take the pair to the Biosyn compound. Ian Malcolm (Jeff Goldblum), a mathematician working for Dodgson, invites Alan and Ellie to the headquarters and secretly investigate the Biosyn locusts. Maisie and Beta are already at Biosyn and Dr. Wu believes their altered DNA can be used to stop the locust plague. Ramsay Cole (Mamoudu Athie), Biosyn’s head of communications who is opposed to Biosyn’s greedy mission, greets Alan and Ellie who later sneak into a secret laboratory, obtain a locust sample and remove Maisie from Dr. Wu’s lab.

Kayla’s cargo plane runs into a flight of Quetzalcoatlus and, before it crash lands, Claire has bailed out. Later the three reunite in the forest. When Dodgson sees his laboratory has been breached, he sets fire to the locust lab that quickly spreads through the entire facility. Ramsay helps Ian get an escape vehicle which he uses to rescue Claire, Owen, and Kayla from caves below the Biosyn facility and they eventually meet up with Ellie, Alan, Maisie, Ramsay and Wu. But before the group can reach Biosyn’s hovercraft and safety, they must avoid being killed by a Gigantosaurus, Tyrannosaurus rex, and Therizinosaurus.

Despite delays in the film’s production, Colin Treverrow who scripted the entire Jurassic World trilogy, and directed two of them, gives the millions of fans of this dinosaur-driven franchise more of what they want and expect. Cinematographer John Schwartzman’s cameras do not disappoint either as they capture the nearly nonstop action pitting humans against these ancient beasts and, occasionally, against each other. It was also a good idea to return Laura Dern, Sam Neill and Jeff Goldblum as well as a number of their Jurassic World colleagues, Pratt, Howard, Sermon, and Wong. Consequently, there is a true sense of ensemble that helps keep this cinematic train on the right tracks.  While none of its successors has recaptured the magical vibe of the original Jurassic Park, this one does improve on the previous installment by giving us a real boo-hiss villain in Campbell Scott’s Lewis Dodgson. But the main motivation to watch this sixth installment in the world of recreated dinos is to see them in action, as exemplified by the terrific chase scene through the streets of Malta where Pratt is pursued by a herd of Atrociraptors. I would have liked to have seen more human-dinos interactions since this is what made some this film’s predecessors so entertaining. While there is a bland message about peaceful coexistence between human and dinosaur worlds, fortunately it is doled out in limited amounts. That said, Jurassic World: Dominion provides a healthy dose of escapist cinema that will keep its audiences thoroughly entertained.