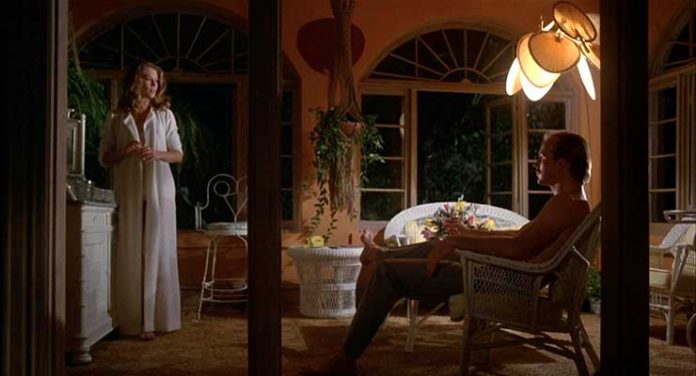 Body Heat revolves around a man, Νed (William Hurt), and a married woman, Mattie (Kathleen Turner), who appear to share a fatal attraction with each other. The situation becomes much more unnerving when they decide to murder Mattie’s husband and flee with his fortune.

In terms of plot, I have to admit I do not find the film very satisfying. Although towards the end the movie proves to have a sophisticated and unpredictable script,I still find the early scenes very problematic. In specific, their chemistry at start feels much forced and many of the movie events are not at all convincing. The establishment of Matty’s character as a sexy femme fatale at the beginning looks odd and it feels like something is missing. Also, I found it weird and almost funny the exaggeration of a scene that includes the breaking of window after a seeming refusal by Matty to reciprocate Ned’s advances. I have to mention too that the way in which Ned is convinced to proceed with the murder was not given the peoper emphasis, on the contrary it was an important aspect which was neglected, which made me feel disappointed as it appeared too unrealistic and out of context.

Direction in the film was taut, with careful attention to sound, with the use of chimes and wind effects, which create suspense and an ominous atmosphere. And that would be mostly thanks to the sound editors, Patrick Drummond and Robert Grieve and the re-recording mixer Jim Cook.  Cinematography, courtesy of DOP Richard H. Kline, is centered around on warm color tones like red and purple or cold ones like blue and gray. It is not to be overlooked that phenomena related to weather conditions and natural elements play a substantial role. Heat waves (as the title suggests), wind (sound direction), fire (in the beginning and towards the end) have a dominant role throughout the film. Music was amazing as well.

The film’s ending is very surprising, which means that the viewers who happen to be lovers of plot twists will be satisfied with the left turn this neo-noir crime/drama from writer/director Lawrence Kasdan throws them.