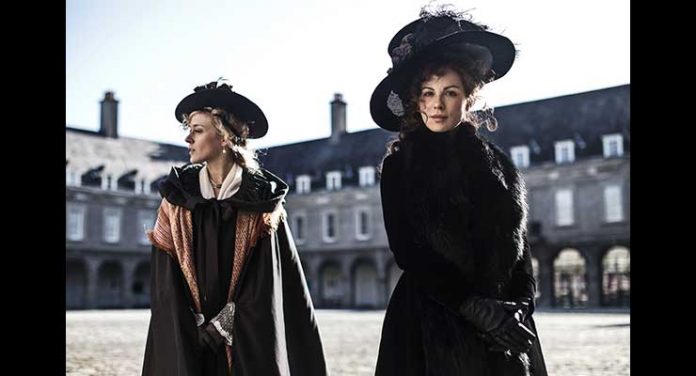 Writer/director Whit Stillman (Last Days of Disco, Metropolitan) makes a significant about-face with Love & Friendship, his cinematic adaptation of an early, little-known Jane Austen novella, Lady Susan, that went unpublished for more than a half-century after the author’s death. Unlike her more mature novels like Pride and Prejudice and Sense and Sensibility that were both successfully realized on the silver screen, this film’s material is less weighty stuff that Austen wrote to entertain her family. Stillman’s body of work is relatively small, consisting of five feature-length films that are  modern comedies of manners. In Jane Austen, he clearly found a kindred spirit who gave insightful and often incisive accounts of the people and mores of her own era.

Love & Friendship opens at the end of the 18th century, the period of its composition. Beautiful Lady Susan Vernon (Kate Beckinsale) is a recent widow and well-recognized “flirt” who is now carrying on a torrid affair with the married Lord Manwaring (Lochlann O’Mearáin). Her “eviction” from Langford, the nobleman’s estate, fuels a  torrent of gossip and harsh public criticism. On returning to London, Susan connects with her close friend, the ex-pat American, Alicia Johnson (Chloë Sevigny) who is married to the much older and rather dull Englishman Mr. Johnson (Stephen Fry).  Short on funds and needing free lodgings, Susan and her attendant, Mrs. Cross (Kelly Campbell), head for bucolic Churchill, family home of her brother-in-law Charles Vernon (Justin Edwards) and his wife Catherine (Emma Greenwell). Reginald DeCourcy (Xavier Samuel), Catherine’s brother pays a visit, and becomes entranced by Susan, much to the displeasure of his sister and the senior Sir Reginald (James Fleet). 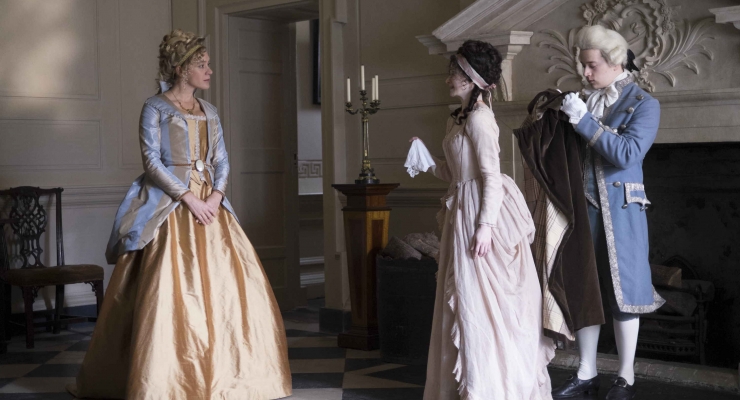 Susan’s daughter Frederica (Morfydd Clark) is expelled from her boarding school and comes to Churchill just before the very wealthy and simple-minded Sir James Martin (Tom Bennett) unexpectedly appears. Lady Susan intends to arrange a marriage twofer, she with the younger Reginald and Frederica with the “silly” Sir James, but there is a major snag: Frederica does not want to marry the man her mother has chosen for his money.  The best line of the film’s typically piquant dialogue surely goes to Lady Susan when she refers to Mr. Johnson as “too old to be governable, too young to die,” and one that perfectly sums up the intellect of this 18th century man-eater. The quicksilver dénouement of this movie could lead to matrimonies, perhaps not the ones that we expected.

Regarded as one of the best filmmakers of our times, Whit Stillman has taken an old-fashioned storyline and translated it into one that will still appeal to contemporary audiences certainly familiar with concept of marrying for money and not for love. The writer/director makes marvelous use of period dialogue, costumes, and music to recreate the authentic sights and sounds of the Austen era. Veteran cinematographer Richard van Oosterhout’s cameras capture the sweep of the verdant countryside and the sprawling grounds and interiors of some historic dwellings that evoke the essential sense of place. The reunion of the very talented actors Beckinsale and Sevigny (The Last Days of Disco) showcases two very attractive and resilient women who are so much more adroit than their male counterparts. As is the case in all of Stillman’s films, the age-old battle of the sexes never really ends but simply receives a momentary truce. Love & Friendship is a terrific little film that surmounts  its potential preciosity with stunning performances from its cast who delivers some “laugh out loud” moments that Ms. Austen herself would have enjoyed. Love & Friendship ran in theaters and is now available on various online and VOD outlets.