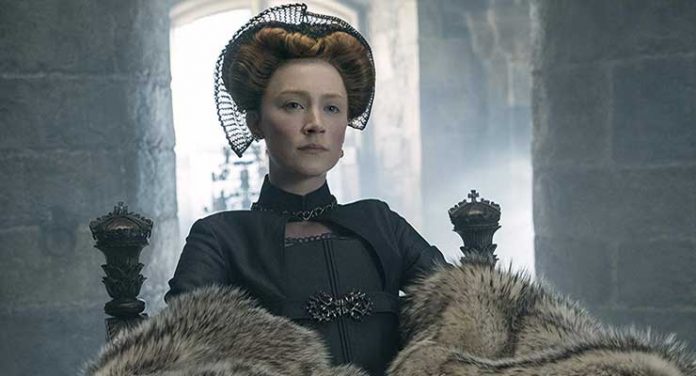 Mary Queen of Scots is the new historical epic starring Saoirse Ronan as Mary Stuart and Margot Robbie as Queen Elizabeth I. Considering the Queen of England is still an iconographic monarch figurehead to this very day, we don’t need a genius to see how Mary Queen of Scots will end. We can hopefully be entertained on going through that journey though, right? Some of the names in Mary Queen of Scots have stayed the same while the telling of events have been changed to protect the guilty or innocent.

Mary Stuart (Ronan) is the young Queen of France at the tender age of sixteen and widowed by the age of eighteen. She refuses the pressures of marriage and returns to her homeland of Scotland to regain her rightful throne. England and her interests are ruled by Queen Elizabeth I (Robbie), but she is fascinated by Stuart’s tenacity and unwillingness to yield her protests against her “sister.”

While turmoil seems to threaten the kingdom(s) venomous snakes seek to play their hands at the table by trying to influence both women. Stuart’s advisor ask that she marry and have a child that will be heir to the throne and the same for Queen Elizabeth. This goes on back and forth for a while and grows tiresome.

I’ll be honest and say that I am no scholar when it comes to the history of England and its neighboring countries or territories. My problem is that Mary Queen of Scots is an expensive looking melodrama that never reaches a satisfactory point, while being just dull. Parts of the film look great and others look like a cheap production of the BBC with awful costumes and makeup work. It’s like they ran out of money halfway through and they cut and pasted the rest of it. During one scene later in the film, Robbie, decked out in a bright red bouffant wig and clown white make-up had her looking like Pennywise from the It films. I heard people chuckling at my screening during that scene.

Being that both women were powerful in their own rights and having their closest advisors be men, for the most part, I was looking forward to some serious and hardcore power struggles. What we did get was brief and not very compelling. Another thing, many of Stuart’s and Elizabeth’s inner circle were comprised of women and men with questionable proclivities. You would think that would elevate the material even more but none of it meshes well.

Now, with all that bashing out of the way, I will say that the two leads do great in their parts. Ronan is front and center and receives most of the screen time. Margot Robbie is featured throughout, but her role is secondary — granted, the title of the film says who this movie is about, so do not be surprised at Robbie’s “cameo” — It is an extended one, however.

Mary Queen of Scots is not the worst film I have seen this year but it does rank up there with being a mediocre one. History buffs may gravitate towards the film but from what I understand, the filmmakers got most of the history wrong. Again, I do not recommend the film, so taper your expectations if you must see it in theaters.

2 / 5 TheaterByte Rating
{{ reviewsOverall }} / 5 Users (0 votes)
Focus Features | Perfect World Pictures | Working Title FilmsStudios & Distributors
R (for strong sexual content, nudity and language.)Rating Certificate
UKCountry
EnglishLanguage
124 Mins.Run Time
2.35:1Aspect Ratio
Josie RourkeDirector
Beau WillimonWriter
7 Dec. 2018Release Date
The Film
Summary
Mary Queen of Scots is the latest historical epic to tell the tale of Mary Stuart's attempt to overthrow her cousin Elizabeth I and claim the throne of England. The film is a dull affair with its only saving graces Saoirse Ronan and Margot Robbie in the lead roles. Everything else in-between does nothing to raise this film's souffle.
What people say... Login to rate
Order by: