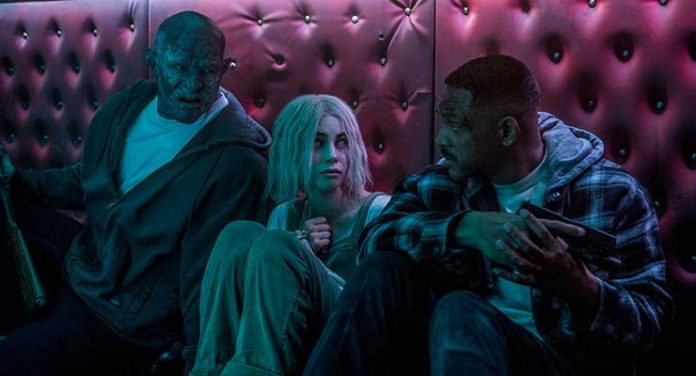 Netflix streams what is perhaps their biggest original “blockbuster” film yet with the Netflix Original Bright.

Imagine a present-day Los Angeles in which the creatures from fairytales and myths (fairies, elves, orcs) live alongside humans. Police officer Daryl Ward (Will Smith) has just recovered from being shot and his partner Nick Jakoby (Joel Edgerton), the first Orc in the LAPD’s “diversity” program, is believed to have let the Orkish perp escape. Daryl’s wife Sherri (Dawn Olivieri) expresses her concerns about Nick but Sergeant Ching (Margaret Cho) will not assign Daryl a new partner since no one else will ride with him.

Ward and Jakoby arrest an sword-wielding “streetman,” Serling (Chris Browning). When he is interrogated by two FBI “Magic Division” agents, Elf Kandomere (Edgar Ramirez) and human Montehugh (Happy Anderson), Serling explains that he is helping to resurrect the Dark Lord by collecting magic wands that only “Brights” or superhuman elves can control. The two policemen survive a shootout and find a massive arsenal and the Bright, Tikka (Lucy Fry), who has pilfered a wand from another Bright, Leilah (Noomi Rapace), leader of the Inferni. Leilah is determined to recover the wand and aid the Dark Lord’s return. A vicious barrio gang, headed by the paralyzed Poison (Enrique Murciano), has gotten word that the wand is in their ‘hood and and joins in the hunt. Don’t count out the Fogteeth Orcs either, since their supreme leader Dorghu (Brad WIlliam Henke) also has designs on the magic powers that the wand possesses.

What follows is a series of epic gun battles, explosive encounters, humans pitted against Orcs, Elves, and other humans, all generating a panoply of death and destruction. Although Ward and Jakoby began with an adversarial relationship, the Netflix Original Bright turns into an offbeat “buddy/road film” in which the lines between human and Orc blur even if they never get entirely erased. That said, screenwriter Max Landis, son of Hollywood legend John Landis, delivers a script that is overly ambitious in efforts to interweave the worlds of fantasy and everyday life. The storyline meanders and, at times, loses its footing entirely. Essential backstories concerning the Dark Lord, Orcs, Elves, and Brights are merely hinted at but leave viewers with many more questions than answers. Director David Ayer (Suicide Squad) must share some of the blame as he often subordinates the drama (such as it is) to special effects and uses chase scenes as primary vehicles for driving things forward.

Recently, lead actor Will Smith has appeared in a number of lackluster films like Suicide Squad, Collateral Beauty, and After Earth and phones in his Independence Day persona that blends anger, annoyance, and occasional humor. Brilliant actor Noomi Rapace is virtually consigned to a cameo role, as are skilled character actors Edgar Ramirez and Happy Anderson. If there is a reason to tackle the Netflix Original Bright at all, it is how much the unrecognizable Joel Edgerton invests into his Orkish role, becoming the only three-dimensional character in this large cast. 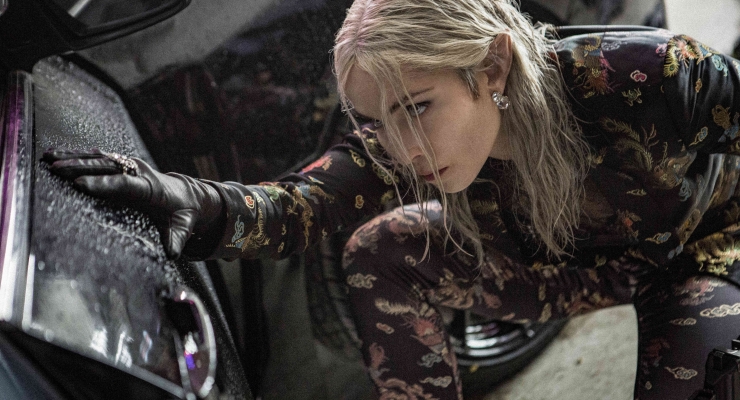 Roman Vasayanov has shot this film with ARRI Alexa cameras in native 4K Ultra HD with both HDR10 and Dolby Vision high dynamic range (HDR) mastering. However, the mostly dark scenes subvert much of the advantages of this technology. Los Angeles has been a frequent site for sci-fi thrillers but with a dearth of atmospheric location shots, the Netflix Original Bright could have been shot on a studio back lot nearly anywhere. As is the case in fantastic creature films, the special effects and make-up crews provide most of the visual impact. The theatrical soundtrack was recorded in Dolby Atmos, but the streaming version defaulted to multi-channel LPCM on my setup, effective, but not as immersive.

With a budget approaching one hundred million dollars, the Netflix Original Bright is a major effort that does not yield a good return on investment. A bit surprisingly, the streaming network has already ordered a second installment also starring Will Smith. I think that I will pass on that one.

The Netflix Original Bright opens in theaters and begins streaming on Netflix December 22, 2017

3 / 5 TheaterByte Rating
{{ reviewsOverall }} / 5 Users (0 votes)
Overbrook Entertainment | Trigger Warning Entertainment | Grand Electric | NetflixStudios & Distributors
TV-MA (strong violence and language)Rating Certificate
USACountry
EnglishLanguage
117 Mins.Run Time
2.35:1Aspect Ratio
David AyerDirector
Max LandisWriter
22 Dec. 2017Release Date
The Film
Summary
A detective (Will Smith) recently recovered from being shot is paired with a partner no one else wants to ride with (Joel Edgerton) and finds himself protecting a magical device from nefarious magical beings in Netflix's big budget original film Bright. It is an ambitious attempt to create a modern-day world reminiscent of Dungeons & Dragons or World of Warcraft in which humans, orcs, and elves coexist that has a meandering storyline and less than stellar direction.
What people say... Login to rate
Order by: