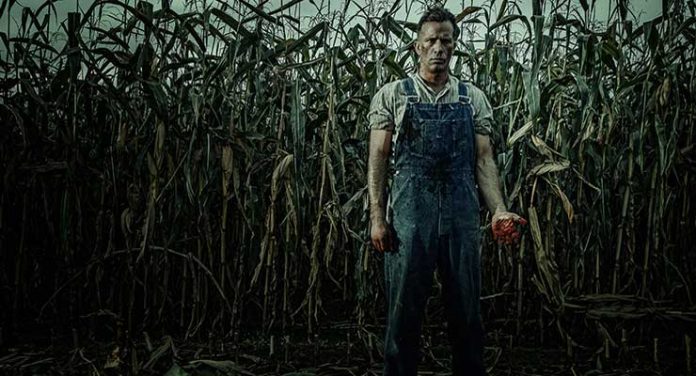 It has certainly become the year of Stephen King adaptations — Netflix has come through again, in less than a month, with a second offering called: 1922. The film stars Thomas Jane as a humble and hardworking farmer named Wilfred James. He lives out in the country with his wife Arlette (Molly Parker) and son Henry (Dylan Schmid). Life seems to move at a crawl, which makes everything that may or may not be going well in the lives of the James clan more evident.

1922 is not just a clever title — it’s the year the film takes place — we are told by our narrator, who is, in fact, Wilfred James himself a few years after. The meat and potatoes of the film are a flashback of sorts in terms of structure. Wilfred has some cornfields and live next to them in a small house with his family. His wife Arlette is bitter at her and her family’s mundane existence. She has also inherited a vast amount of land from her late father that she wants to sell at a high price and take herself and family into the city. She is no fan of country living.

That notion puts a stinger on Wilfred, because it is as if he’s being scorned. Henry, however, loves his parents, but is ultra-loyal to his father. Henry also has feelings for the neighbor girl down the way. After tempers flare between Wilfred and Arlette — Wilfred convinces Henry to help him in a devious plan of uxoricide, wife killing.

Soon after the deed is completed (no, this is not a spoiler, because we already know what the film is about — even the trailer shows that) strange occurrences begin to fall upon what’s left of the James’ household. Wilfred starts to see rats everywhere, but thinks it could be due to his increase of alcohol intake. Henry settles in with the girl from next door and gets her pregnant at 15 years of age — they’re both teenagers. The sheriff starts poking in on the whereabouts of Arlette, as do the folks that were intent of acquiring her land share. Wilfred devises a clever subterfuge but can’t help the feeling that the law and other forces on closing in. 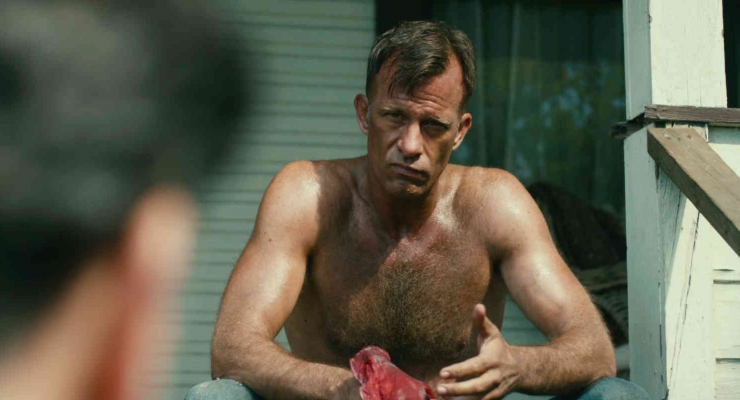 I have to stop it there in terms of story plot-points due to possible revelations. 1922 is a gorgeous film to look at. The cinematography and production design is stellar from top to bottom and in between. You can taste the dirt and grit and smell the manure. Thomas Jane as Wilfred is great down to his might southern drawl. The film can act as a cautionary tale about karma and folks getting their just desserts. As soon as the men commit the heinous crime their whole lives crumble — and it’s not an instant crumble — it’s one small calamity after another.

I have heard rumblings that the film is “slow.” I don’t necessarily think that that’s the case. Yes, the film is a slow burn but it’s not a slow burn leading into graphic and horror violence, because there are only a few instances of graphic violence, moving the story along. I pretty much had a knife and fork in each hand as I calmly “devoured” the film. I felt transported. 1922 was adapted to screen by Zak Hilditch and it was phenomenal. Another cool tidbit is that Mike Patton of Faith No More fame acted as composer. The music score was great.

If the show was still around — a similar theme going would be that of the Tales from the Crypt template. Men live, commit evil, pay the price, with some help from the supernatural. That’s the way I saw this film and it is why it worked for me. In fact, the filmmaking was terrific and so were the performances. It’s the Thomas Jane and he is a beast. I commend Netflix for seeing the possibilities of this Stephen King adaptation and releasing it for subscribers. Halloween is fast approaching and the film would make for perfect viewing, assuming you haven’t watched it yet. 1922 is highly recommended.

4.5 / 5 TheaterByte Rating
{{ reviewsOverall }} / 5 Users (0 votes)
Campfire | NetflixStudios & Distributors
TV-MA (Graphic violence and profanity)Rating Certificate
USACountry
EnglishLanguage
101 Mins.Run Time
2.35:1Aspect Ratio
Zak HilditchDirector
Zak HilditchWriter
20 Oct. 2017Release Date
The Film
Summary
In Netflix's latest Stephen King adaptation, Thomas Jane plays a farmer in 1922 who tells the story of how he murdered his wife to gain control over her land. 1922 is a fantastic Stephen King adaptation. Netflix is 2 for 2 in that area (Gerald's Game) and here's hoping they continue the trend with King's material should they get the rights to more of it. Molly Parker, Dylan Schmid, Kaitlyn Bernard, Brian d’Arcy James and Neal McDonough also star. Highly recommended.
What people say... Login to rate
Order by: