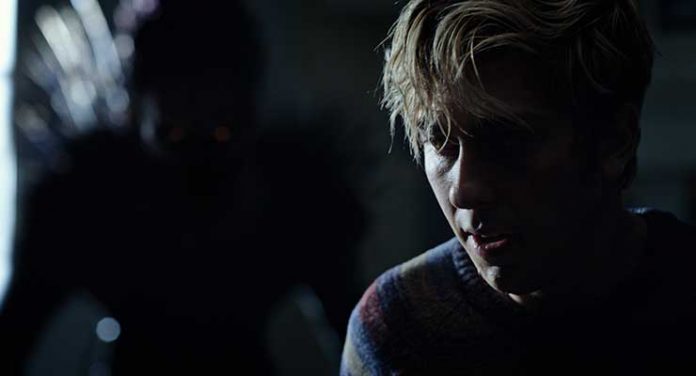 If you’re an anime fan then you already know about the phenomenon that is Death Note. The horror/fantasy series, which itself was based on the Japanese manga series written by Ohba Tsugumi and illustrated by Obata Takeshi, was dark, intriguing, and complex work produced by anime production house Madhouse. Madhouse has built a niche for itself in the anime world creating visceral horror. Well, along comes Hollywood, and this franchise, which has already had multiple adaptations from a live-action Japanese film, live-action Japanese TV series, and games in addition to the anime series, has been Westernized.

The controversy over “white washing” of this story has been gone over and over ad nauseam, so I won’t add to that. This is an American production and it is set in Seattle, Washington. Could the characters possibly have been Asian? Certainly, especially given the higher percentage of Asian population on the West Coast of the United States versus the rest of the country. The bigger issue with this Netflix Original Film is the incessant need to make it hip and appeal to the youth culture, with slo-mo shots, angst-ridden music, and taking what was a solitary, male protagonist with a lot of cunning, Light, and making him now a co-conspirator with a girlfriend.

This update of Death Note takes many of the main plot points from the original – a high school student named Light (Nat Wolff) who lives at home alone with his police detective father (Shea Whigham). Their relationship has been strained ever since Light’s mother died some years earlier. Light finds a mystical notebook called the Death Note, which allows him to see a Shinigami, or Japanese god of death. The notebook also grants Light himself the power over death. 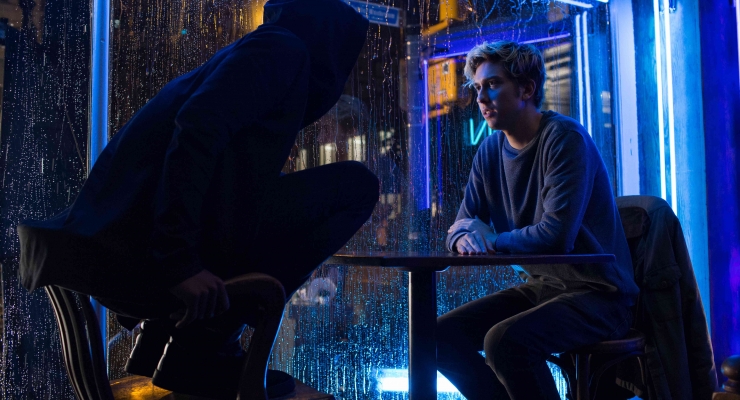 With very carefully laid out rules listed in the pages of the book, Light, once he envisions the face of a victim, can scroll a name on of the pages of the Death Note, and cause their death in any number of ways within a certain time frame. If no specified way of death is written, the person will die from a heart attack. Light, a normally withdrawn and troubled young man who as we learn in the early parts of the film is bullied at school, but also has a sense of justice, decides to use this newfound power to launch a campaign to rid the world of crime and what he sees as evil. He enlists the help of his attractive schoolmate, Mia Sutton (Margaret Qualley, The Leftovers), a girl he helped out when she as being attacked by the school bully.

He tells Mia that he can see the Shinigami and proves it to her by scrawling the name and the exact way of death for a man holding people hostage that is being broadcast on the local news in the Death Note. It happens and the two begin perusing news broadcasts and newspapers to wipe out criminals. Light, under the pseudonym of Kira, which means both “Light” and, in Japanese, “Killer”, gains both notoriety and fear worldwide. This gains the attention of eccentric and anonymous crime fighting hacker L (Lakeith Stanfield). The chase is on. L begins honing in on suspects and narrows his search down to Seattle, someone attached to the Seattle police department and eventually right down to Light.

There are numerous changes in this 101-minute film adaptation over the anime series and even the live action Japanese TV series. The latter pretty much stuck to the anime series note for note, but it definitely did not have the production budget of this Netflix/Warner film. This film takes the story off on a tangent however. I suppose the character of Mia Sutton is meant to stand in for the anime series’ female character, Amane Misa, a second Kira and sort of love interest for Kira in the anime series. The Mia Sutton character does not hold up well. In fact, none of the characters in this production really hold up well in comparison, since they have been squeezed into such a limited time. They feel one-dimensional with very little backstory to support their motivations. L has little backstory, we just no he’s quirky and we find out he was from an orphanage where he was recruited. Light is whiny, is father’s a detective, and his mother died. Okay. Suddenly he wants to kill a lot of people. The worst change of all is what they did with the Shinigami, Ryuk (voiced with a wonderful menacing voice by Willem Dafoe). Unlike in the anime series, he is much more proactive in the killing of victims.

There are some improvements to the story’s premise as well. It always bothered me in Death Note, fantastic as it is, that Light hardly made use of the rules clearly stated in the book. He has the power to scribble someone’s name in and describe how he or she is going to die. In the anime series, it seems all he ever did was write a name and let everyone die from a heart attack, which is an easy way to make deaths start looking strange and suspicious. Here, we are treated to all sorts of inventive Death Note deaths, like decapitation by a ladder, for instance.

The biggest achievement in this version of the film is the gorgeous visual aesthetic thanks to director Adam Wingard (Blair Witch) and his cinematographer David Tattersall (Star Wars Episodes I, II, & III). The visuals are eye catching and full of color, from the neon glow of the lights in the café where L first confronts Light to the shadowy streets of Seattle as we get the final confrontation between the major players. And the special effects, though sometimes a little too ‘90s grunge music video, do work to an extent to set up the mood of the film. The slow-motion cheerleaders that open the film are a prime example. Then of course there is the CGI Shinigami, which looks far better than the one on the live action Japanese series, and very, very threatening.

When all is said and done, this remake is neither great nor terrible, but the anime series still reigns as the best adaptation of the manga series available to date. For Western audiences who may be unfamiliar with the franchise, there is a lot here to enjoy in this moody horror/fantasy film, the standout being the visuals and skin crawling voice of Willem Dafoe.