Netflix Original Fractured deals with a couple at odds with each other— recovering alcoholic Ray (Sam Worthington) and his long-suffering wife Joanne (Lily Rabe) Monroe—are on a Thanksgiving road trip with their daughter Periwinkle or “Peri” (Lucy Capri). When they stop at a roadside gas station, the story takes a dark turn as a stray dog frightens Peri and as she falls of the top of a construction site, Ray falls as well in an effort to save her. Both regain consciousness and Ray drives his family to a local hospital only to find the emergency room overcrowded with patients.

After checking in, the Monroes receive intensive questioning by a desk clerk, and they are asked to be listed as potential organ donors an offer that they summarily decline. Ray, Joanne and Peri finally meet kindly Dr. Berthram (Stephen Toblowsky) who diagnoses the little girl’s broken wrist and orders a CT scan to rule out brain trauma. Joanne takes Peri ostensibly for the scan but, while Ray dozes off in the waiting area,  the elevator unexpectedly descends to a sub-basement. When Ray wakes up, Dr. Berthram has gone off duty and the nurse tells him that there is no record of his wife and daughter ever having been there. Dr. Lucado (Chris Sigurdson) has come on duty and sedates Ray after he reacts violently to this disturbing news about his family.

Ray self-administers some adrenaline that is conveniently lying around, breaks out of his holding room and leaves the hospital. He meets a pair of policemen in the parking lot, but their investigation fails to turn up any tangible evidence that Joanne and Peri were ever at the hospital. He  begins his desperate search for his family with little help from the hospital staff who believe that he is simply confused from the head injury that he sustained in his fall at the gas station. As Ray digs deeper into the hospital’s depths, he makes some macabre discoveries that might point to a very different outcome for his wife and daughter than the one he expected. 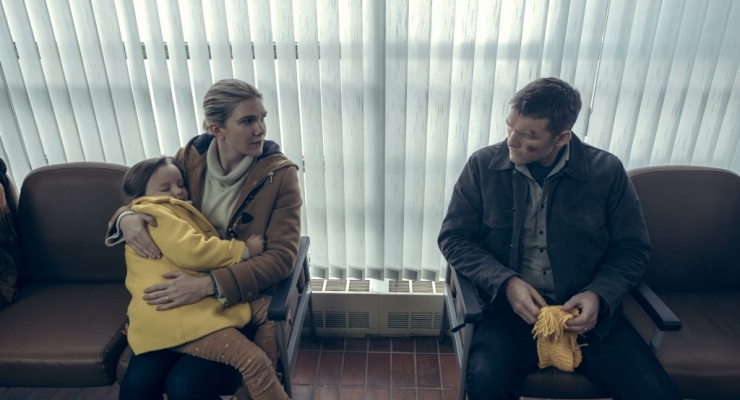 Director Brad Anderson has taken Alan B. McElroy’s dark tale and has crafted a tension-packed thriller that deliberately blurs the lines between reality and what might be visual hallucinations. Sam Worthington delivers a sympathetic portrait of a devoted family man whose life had been previously troubled by the alcoholism that followed the death of his pregnant first wife Abby in an automobile accident. His determination to make good on his promises to be a better husband to a concerned Lily Rabe and a better father to an adorable Lucy Capri keeps us rooting for him to succeed on both counts. Further supporting this take on the behavior exhibited by Worthington’s character is the portrayal of a hospital staff that seems both perfunctory and basically uncaring. Some astute viewers may figure out the major plot twists before I did but most of us will remain on the edges of our respective seats until the final scene is played out. Some of the gruesome scenes, real or imagined, will make this a challenging watch for the faint of heart.  For the rest of us, Netflix Original Fractured is well worth taking in.

3.5 / 5 TheaterByte Rating
{{ reviewsOverall }} / 5 Users (0 votes)
Koji Productions | Crow Island Films | Macari/Edelstein | Paul Schiff Productions | NetflixStudios & Distributors
TV-MARating Certificate
USACountry
EnglishLanguage
100 Mins.Run Time
2.39:1Aspect Ratio
Brad AndersonDirector
Alan B. McElroyWriter
11 October 2019Release Date
The Film
Summary
A tense psychological thriller that finds a husband and father on the verge of losing his mind when his family cannot be located at the hospital where he drove them after his daughter had an accidental fall. Sam Worthington gives a riveting performance as a man who may be experiencing post-traumatic hallucinations or, perhaps, everything that he sees is really happening.
What people say... Login to rate
Order by: