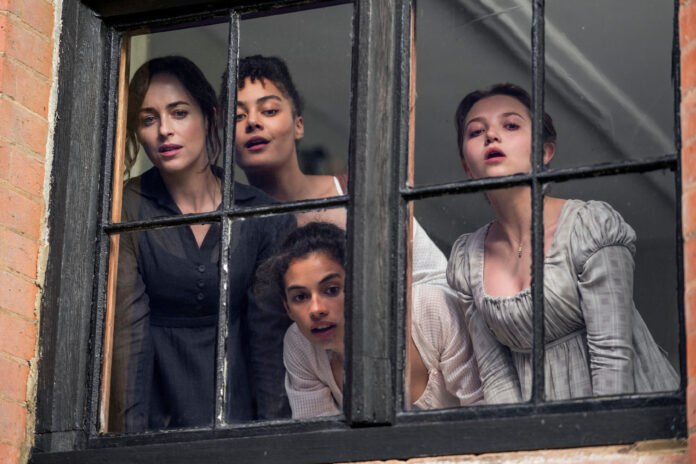 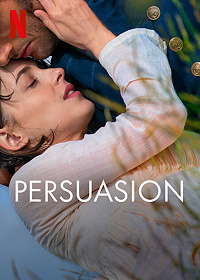 Persuasion is a romantic drama that is based on Jane Austen’s novel of the same name. It is about a young woman, Anne Elliot (Dakota Johnson), and her feelings for her past love Frederick Wentworth (Cosmo Jarvis) after they meet again some years later.

Anne Elliot is living with her self-absorbed father and sisters in Kellynch Hall. She and Frederick, who is a naval officer, are in love with each other and they wish to get married. However, because of his low status, he is considered unsuitable for Anne and she is advised to break off the engagement. She is in pain and her feelings for him persist, as she is seen keeping track of his achievements all the years that follow their separation.

Fate brings these two together again. Now Frederick is a Captain, he is rich and Anne’s family is facing financial trouble requiring them to move to a more modest home. At first he is very hostile towards her but later they agree to remain friends. Meanwhile, the sister of her brother in law, Louisa, falls in love with Frederick and they seem to get on well with each other, which makes Anne broken-hearted. She and Frederick become distant through time, as a mysterious man expresses his attraction towards her and tries to court her. Is that really the end of their romance though?

I really enjoyed the movie, as it combined comedy and romantic element in a successful way, while retaining the aesthetic and characteristics of the era in which it takes place. The atmosphere takes us to the 19th century and the dialogue, style, and fashion choices represent the era in a realistic way. The only problem is that during the second half of the movie there is a fifteen-minute span when nothing interesting is really going on and I lost interest for a little while. There are people who criticize this adaptation because of the attempt to make it look more modern, which is something I disagree with. I have seen many Jane Austen movie adaptations and I always had the same wonderful feeling in the end and Persuasion (2022) is no exception to the rule. For sure it could have been better, as it tends to be superficial sometimes, but still it enchanted me.

Carrie Cracknell and Joe Anderson did a very good job as the director and cinematographer of the film respectively. The majority of the scenes take place in Bath and there are some lovely scenes that make us appreciate nature and they are shot very artistically. There is a scene where Dakota Johnson is seen swimming in the sea after getting overwhelmed by feelings of sadness and the sunset makes it look very pleasant aesthetically. Also there is another scene where she is playing with her siblings that is visually memorable.

The last scenes, when we finally see what happens with the two protagonists, and the quotes made me feel so moved.

Persuasion is streaming now on Netflix

Load more
Persuasion (2022) (Movie Review)After years apart, Anne Elliot crosses paths with the love she was forced to give up because of his low status, only now her family's fortunes are on the wane and his are on the rise. She's still in love with him; will they get back together?