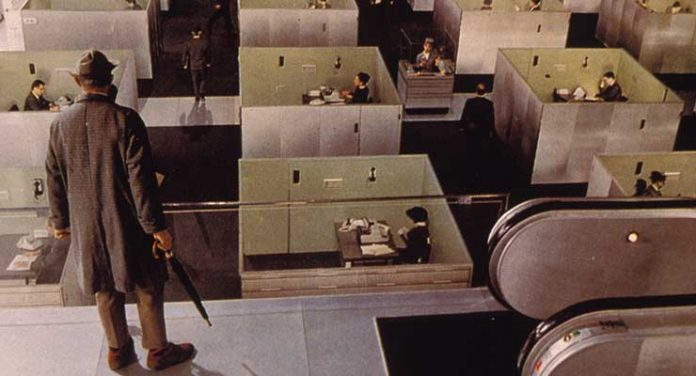 Playtime (1967) revolves around the intersection of the lives of some people and Jacques Tati’s comedic character Monsieur Hulot in a perplexingly modern Paris.

The problem with this film has to do with the fact that we never see any focus to the real life of the characters, we just see them wandering around and hanging out in the city, something that I found a bit superficial. In other words there is not a specific plot in terms of a special sequence happening or an aim that has to be completed. Everything appears to be very dismantled and chaotic and this lack of anything in particular, and near-absence of dialogue made it dull. However, this has its pros, if we think that this disorganization is actually the mirror of a modern era, full of technological devices and machines that are on sale, where people are unable to choose what they really need and are prone to consumerism. A really good job was done with sarcasm and in representing the bad elements of urban life, full of traffic congestion and grey buildings. In addition, the movie was very surrealistic to my suprise, and this is exactly where the humor is based, which was interesting, still I was not very impressed by these comedic sequences.

The characters of this film are Tati’s classic and bumbling Monsieur Hulot and a tourist group of elderly American women guided by Barbara. The protagonist and Barbara and the group occasionally bump into each other, until the two of them finally talk to each other. Monsieur Hulot appears very bewildered by the way of life in Paris and many times he gets lost.
Barbara appears to have some sort of lust for life and traveling and seems to be flirtatious in contrast to the women of the group.

• Jacques Tati, playing Monsieur Hulot is obviously tailored to this role and by this time very comfortable with this character, whicvh he had been playing in many of his films for years. He managed to adjust well to the comedic demands of the character.
• Barbara Dennek was also very good in her role as Barbara, and I enjoyed her chemistry with Tati.

As far as direction is concerned, it is definitely the ace of this movie, and especially sound direction. It conveyed successfully the way the lives of people in Paris who are overwhelmed by urbanization, technological advances and consumerism. The noise throughout the movie and the quick movements of the rest of cast evoke feelings of disruption and hyper-stimulation.

Cinematography in Playtime involves a number of different places that are part of the then-contemporary urban lifetstyle, like the airport, the office, the gadget exhibition, the flats, the restaurant and generally the roads full of traffic. The scenes of the French city full of grey and large buildings and the ones with traffic are scenes with which people of large cities can still relate to nowadays. Architecture is very impressive as well, with the office in specific and the airport being my favorite ones. I also liked the scene during the party when parts of the ceiling collapse, as it is very symbolic. Generally, it gives the impression to the viewer that wherever they go, it is possible to run into some kind of advertisement of a new technological invention. Last but not least, reflection is important we see for example the Eiffel Tower only through its reflection at the door of the offices made by glass, another symbol of modern tenchonolgy portrayed visually on multiple levels.

The ending was a back to square one, nothing memorable in my opinion and a little insignificant to me as the viewer appreciates the issues taken into account and direction and cinematography even more.