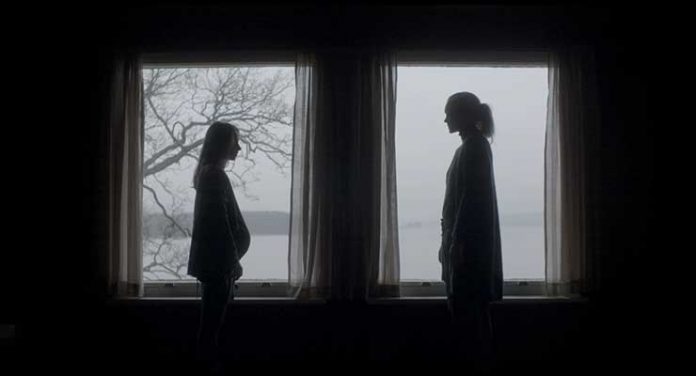 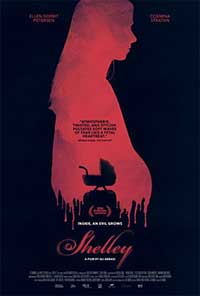 Kasper (Peter Christoffersen) and Louise (Ellen Dorrit Petersen) are a married Danish couple that live in a very basic (no electricity) house on the shores of a remote lake. Louise is recuperating from recent surgery under the ministrations of a Gandalf-like healer Leo (Bjorn Andresen). Kasper hires a Romanian girl Elena (Cosmina Stratan) to help around the house until his wife has fully recovered. Louise tells Elena that she had a hysterectomy and cannot have children.  Elena hopes to earn the money to return home and see her young son Nico. Louise offers Elena sufficient funds to go back to Romania if she would agree to become the surrogate mother of a child created from Louise’s frozen eggs and Kasper’s sperm.

Writer/director Ali Abassi begins his first feature-length film Shelley very quietly, focusing on household chores and care of the family’s chickens. After Elena becomes pregnant, the tone of the film turns increasingly somber. The young woman starts to complain of headaches and Leo returns “to remove all of her negative energies” via an exorcism-like session and hints that something is not quite right about this pregnancy.

As Elena’s pregnancy progresses, she begins to have strange visions of dripping rivulets of blood and she hears disembodied voices. Elena becomes paler and more fatigued, develops a rash, and starts to lose her hair, all findings that her doctor (Marianne Mortensen) attributes to a “normal” pregnancy. In spite of such reassurances, Elena’s health and state of mind progressively deteriorate. The subsequent birth of a baby girl named Shelley (perhaps a nod to the author of Frankenstein) introduces a much less organized second act of this film that raises more questions than it answers.

Shelley moves at a very deliberate pace as if waiting for some sort of horrific event to take place. Shot mostly in dark settings and indoors, the cinematography of Nadim Carlsen (The Day After) and Sturla Brandth Grøvlen (Rams) creates an unsettling, claustrophobic universe in which distinctions between fantasy and reality get blurred. The principal cast, Petersen, Christoffersen and Stratan, favors body language and facial expressions to convey their emotional struggles with forces that only they can feel over the film’s rather sparse English and Danish dialogue. This is where Shelley misses the target as we must try to fill in some very significant blanks that the script simply does not address. Although Elena has previously had a child, she seems unusually naïve about the physical and emotional changes wrought by her pregnancy. Kasper’s character never quite fleshes out nor are we privy to why he becomes delusional about his newborn daughter. Louise fares little better as her uxorial relationship with Kasper is shrouded in ambiguity and the couple’s backstory is fairly sketchy. Viewers familiar with Rosemary’s Baby may see some parallels with Shelley as both deal with the dark side of unnaturally conceived pregnancies. Where these two films diverge considerably is in Roman Polanski’s experienced handling of horror and suspense by his level of direction and screenwriting that quite exceeds what this new release possesses. Nonetheless, young writer/director Abassi’s full-length film début does signal a promising start as it received nominations for best film in two 2016 international film festivals. Shelley has had limited screenings and can be viewed on demand at VUDU and Amazon Video.