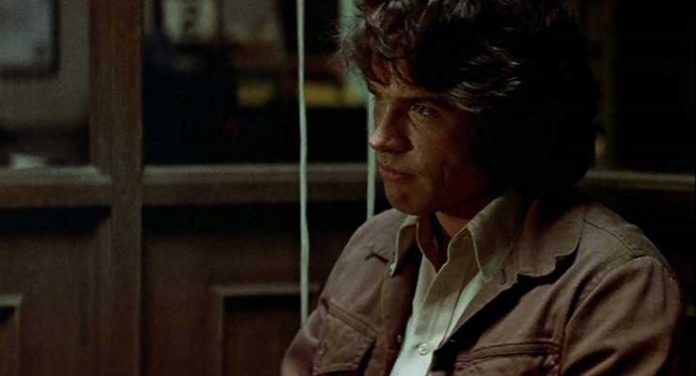 The Parallax View has to do with a series of mysterious assassinations of politicians and of some other people at a rally at Seattle’s Space Needle.

As far as the script is concerned, I wanted to say that it turns to something even more intriguing as time passes, and it is very suspenseful. It is wonderfully structured and the flow of the events was very natural, even though it was sometimes predictable. It was very interesting watching the whole story from the protagonist’s point of view and there were some scenes that reminded me of the movie A Clockwork Orange, which is something I liked.

The protagonist of the film is Joe Frady (Warren Beatty), who is a newspaper reporter and he starts searching for clues that provide a link between the asassinations and the people who were at the rally at the Space Needle. He appears troubled and occasionally aggressive when things do not work out, as he tends to have issues with the police, which affects his career. Although he is not persuaded at the start by the theory of a plan linked to all these murders, he is later convinced and befriends many suspects, so as to solve this mystery. He is determined to provide the newspaper with a great article and to resurect his career.

Bill Rintels (Hume Cronyn) is the editor of the newspaper where Frady works and he is dissatisfied with the progress of his employee. However, he is later convinced that there is a big story to be found, so he gives Frady a large sum of money to investigate.

Jack Younger (Walter McGinn) is a Parallax Corporation official who is interested in enlisting Frady in the security part of the organization, because he thinks that he is a personality that would not be burdened by limits if he were about to complete a mission. Parallax in other words brainwashes troubled people into commiting murders and Jack, as the firm’s representative, appears creepy and sneaky.

There are also some other characters that appear in the movie like Senator Charles Carroll (William Joyce), Lee Carter (Paula Prentiss), Austin Tucker (William Daniels) and George Hammond (Jim Davis), and they are presented as potential targets of the killer.

The cast was great and all of them delivered excellent performances. The standouts for me were William Daniels as Austin Tucker, Hume Cronyn as Bill Rintels and Walter McGinn as Jack Younger, while Warren Beatty as Joseph Frady and Paula Prentiss playing Lee Carter were alright too.

Direction was exactly what a viewer can expect from this genre and Alan J. Pakula did a very good job directing the movie in a way that established an atmosphere full of precariousness and thrills. In terms of cinematography, there was also some variety, which I was kind of late to realize, focusing on the plot itself, but the contrast between light and darkness becomes obvious and is likely a visual cue having to do with the matter of hidden truths.

The ending got me feeling really confused, as it is supposed to be a plot twist, but I found some of its aspects unconvincing. In my opinion, it is deliberate that the script leaves a feeling of skepticism in the end.