The Power of the Dog (Movie Review) 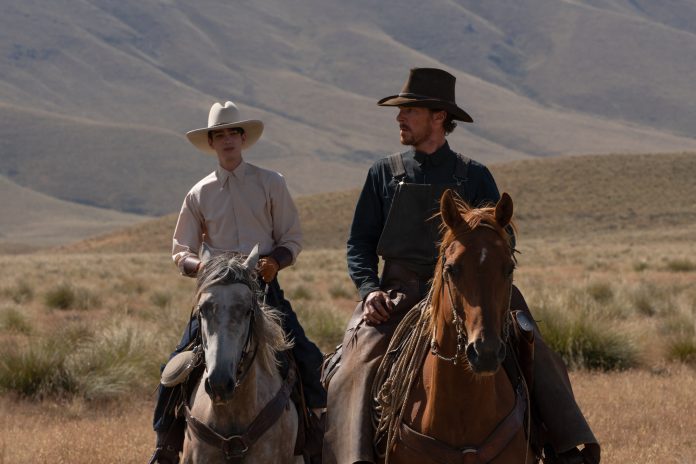 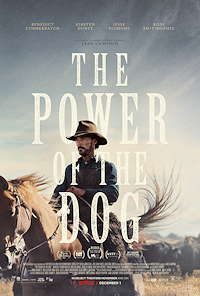 Noted screenwriter-director Jane Campion (The Piano) has made a very faithful adaptation of the semi-autobiographical 1967 novel The Power of the Dog by Thomas Savage based on real characters and situations he encountered when his alcoholic mother remarried, and they moved to a ranch in Montana. The title phrase is taken from King David’s Psalm 22 and as the film progresses, it becomes a metaphor for the types of relationships that evolve between the main characters. Like humans, dogs can exhibit a duality of nature–tame or wild, dominant or submissive, loyal or spiteful.

The Power of the Dog is set in the vast open spaces of 1925 Montana. The wealthy Burbank brothers, Phil (Benedict Cumberbatch) and George (Jesse Plemons) take a break from their cattle drive for refreshments at a local inn/restaurant run by Rose Gordon (Kirsten Dunst). George is smitten by this pretty woman, but Phil finds her son Peter (Kodi Smit-McPhee) a “Nancy” too effeminate for life on the plains. George marries Rose and after she and Peter move into the big ranch house, he agrees to pay for Peter’s medical college education. Phil has developed an intense dislike for Rose and takes every opportunity to humiliate her.

Peter returns for his summer break from school and finds that his mother has become an alcoholic. To make matters worse, he is teased by Phil and the other cowboys. Over time, Phil starts showing an interest in teaching Peter how to ride, kill a trapped rabbit, and make a strong lasso out of rawhide that he will give the boy before his return to college. He also feigns being impressed by Peter’s description of a rock formation as resembling a barking dog. Peter later tells Phil how he found his father hanged and cut him down.

Rose’s drinking worsens as Phil and Peter are spending every day together. She gives Phil’s extra hides away to an itinerant Native American trader and then, dead drunk, passes out. An irate Phil does not have enough rawhide to finish the lasso, so Peter gives him a piece of the hide he took from a cow that had likely died from an anthrax infection. This unsolicited gift leads to a tragic outcome just as the relationship between the two men was becoming more intimate.

Jane Campion does not have an extensive feature-length film catalog but it does contain two films about vulnerable women who are mistreated by men—The Piano and The Portrait of a Lady. While Kirsten Dunst does a creditable job of portraying such a character, this is really a film about three very different men—Jesse Plemons’ kindly and generous George, Kodi Smit-McPhee in a coming-of-age role, and Benedict Cumberbatch, a closeted gay man who was in love with Bronco Henry, a long-dead cowboy. Campion does leave a good bit up to the viewers’ imaginations. Was George too busy to notice that his new wife was becoming a serious tippler thanks to his brother? Did the young medical student knowingly give his uncle a potentially lethal gift? Was Peter’s relationship with his alcoholic mother inappropriate? Other questions remain but if you were paying attention, you will figure this one out by the time the curtain falls.

All considered, this is a brilliant film as Campion mines the Shakespearean vibe of a novel that was considered Savage’s finest. The four principals inhabit their parts to perfection although Cumberbatch, the literal heart and soul of this production will be the one most likely to get Oscar buzz. He spent time working on a ranch to get prepared for his leading role and it definitely shows. Radiohead’s lead guitarist and keyboardist Jonny Greenwood’s edgy score complements Ari Wegner’s camera work that leverages the awesome natural scenery of New Zealand, subbing for Montana, so large that it often dwarfs its sparse human inhabitation. One of the best films of 2021 and highly recommended.

The Power of the Dog is streaming now on Netflix

Load more
Jane Campion has crafted a brilliant film in which characters are conflicted about their sexuality, and try to adapt to changes in their lives in a landscape so large that it makes its few inhabitants seem insignificant. Benedict Cumberbatch's portrayal of a closeted gay man and his burgeoning relationship with his new nephew is Oscar-worthy. Lawrence D. Devoe, MDThe Power of the Dog (Movie Review)