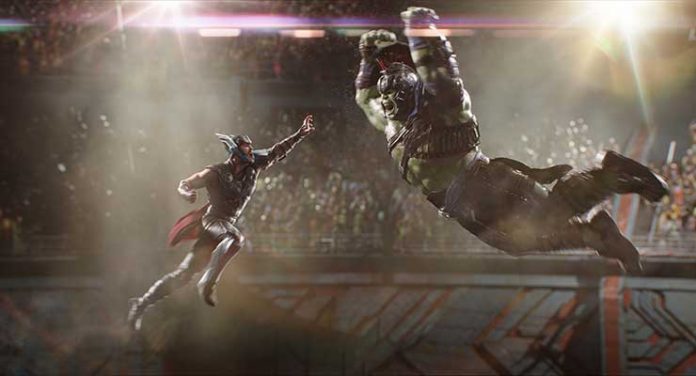 Thor: Ragnarok is the third and latest MCU (Marvel Cinematic Universe) film to hit theaters in as many months and years. Ragnarok brings back Thor (Chris Hemsworth), Loki (Tom Hiddleston), and Odin (Anthony Hopkins). A plethora of new characters are introduced and reintroduced. Coming back for more is Mark Ruffalo as Bruce Banner/Hulk. A brand-new cast of colorful characters is introduced in Ragnarok — after, it is the end of all things Cate Blanchett is the Goddess (indeed she is) of Death. Tessa Thompson is the Valkyrie and Jeff Goldblum is the Grandmaster.

It has been a couple of years since the events of Dark World and things in Asgard are not what they appear. Loki has usurped Odin and spends his days eating, drinking, and watching theatrical plays of prior events — a giant ego stroke of sorts. All of this while Thor is in hell hanging out with Surtur (Clancy Brown). Once Thor deals with Surtur he makes Loki help him find Odin on Earth. As they travel back to Earth to find Odin another calamity back on Asgard is unleashed. Hela (Blanchett) is let loose and begins her crusade to destroy and conquer Asgard once again.

During these events, Thor is helpless and ends losing Mjolnir and powerless. He ends being banished to a planet of junk that is governed by the flamboyant Grandmaster (Jeff Goldblum). On this planet by the Grandmaster’s rules — there is only one rule and that is to fight in the pit. Now if you have seen the trailers and commercials you probably already know that the Hulk is Grandmaster’s champion. Thor must somehow convince the big green guy to not kill him, so that they can. get back to Asgard and save the planet. 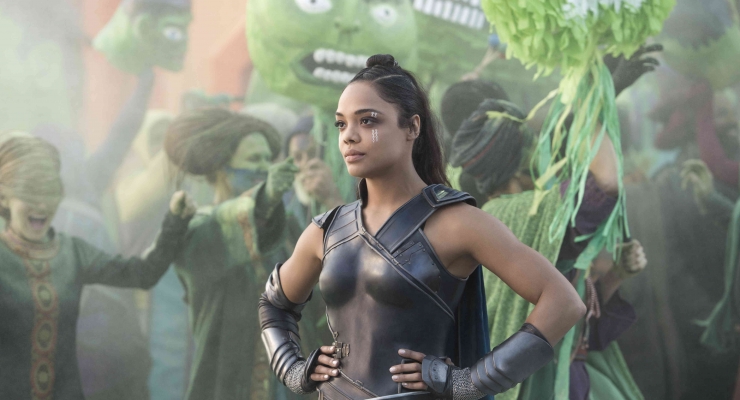 Thor: Ragnarok is the third standalone film based on Marvel’s Norse God. It is fully loaded with action, comedy, gags, and gallows humor. Does it work? Yes, but only to a certain extent. Tiaka Waititi (What We Do In The Shadows) comes in and flips Thor on his head — literally and figuratively.

Having Thor: Ragnarok be a “buddy cop” film filled with tons and tons of humor, gallows and otherwise undermines the character and the two previous standalone flicks that were directed by Kenneth Branagh and Alan Taylor. I was talking to a friend about *SPOILERS AHEAD* Frigga’s death scene and send off in Dark World, which I thought was beautifully shot and rather emotional — that if that had used gallows humor in the spirit of Ragnarok it would have been awkward as all hell. That’s one quip and never mind whether Thor is “worthy” or not, having that established in the first film and later Avengers appearances — it matters not, because Ragnarok does its own thing. I cannot help to wonder that maybe the actors and filmmakers thought that the “Thor-verse” was taking itself way too seriously and that it needed to be lightened up a bit. I am all for lightening up a bit but Ragnarok dabbles in a bit of overkill for my tastes.

Yes, there are plenty of laughs throughout the film and it is equally balanced out with some nifty action scenes featuring our heroes and the sexy-as-hell Hela — but make a mental note that it is more comedy driven than anything else. Now, with that being said, I thought Ragnarok was fantastically designed. The color palette was on fire and I love the electronic synth-score by Mark Mothersbaugh. The technical merits succeed as usual, when some story elements falter. Is it worth seeing on the big screen? Yes. Is it worth staying for the mid and end credit sequences? No. These scenes were the worst of the MCU bunch to date. In any event, Thor will return in Infinity War next year, but we will get the much-anticipated Black Panther film in only three months, so there’s that.

3.5 / 5 TheaterByte Rating
{{ reviewsOverall }} / 5 Users (0 votes)
Marvel Entertainment | Marvel Studios | Walt Disney PicturesStudios & Distributors
PG-13 (for intense sequences of sci-fi violence and action, and brief suggestive material)Rating Certificate
USACountry
EnglishLanguage
130 Mins.Run Time
2.35:1Aspect Ratio
Taika WaititiDirector
Eric Pearson | Craig Kyle | Christopher YostWriter
3 Nov. 2017Release Date
The Film
Summary
Thor (Chris Hemsworth) finds himself imprisoned and battling against the Hulk (Mark Ruffalo) while also fighting to save the world from a new threat in this action-packed extravaganza and non-stop roller coaster ride of laughs. The comedic aspects of the film are somewhat overwhelming, but Ragnarok still retains enough action and adventure to entertain and please fans of the Thor MCU. It should be seen on the biggest screen possible, because the design-work is outstanding.
What people say... Login to rate
Order by: