Niagara Falls detective and Gulf War veteran John Dromoor (Nicolas Cage) and  partner JJ Breen(Michael Papajohn) encounter a wanted murderer. In the ensuing gunfight, the perp and Breen are both fatally shot while  Dromoor is wounded. Some months later, Dromoor meets sexy young widow Martine “Teena” Maguire (Anna Hutchinson) in the local bar. She has a 12 year-old daughter Elizabeth “Bethie” (Talitha Bateman) and they both live with her mother, Agnes Cavecchi (Deborah Kara Unger). On the Fourth of July, mother and daughter leave a beer-stoked party and walk home through Rocky Point Park. They are accosted by four local men who brutally rape Teena, leaving leave her for dead, and injure Bethie’s arm. Dromoor spots the stunned girl wandering along the road and finds her mother, bleeding and unconscious in a deserted boathouse. 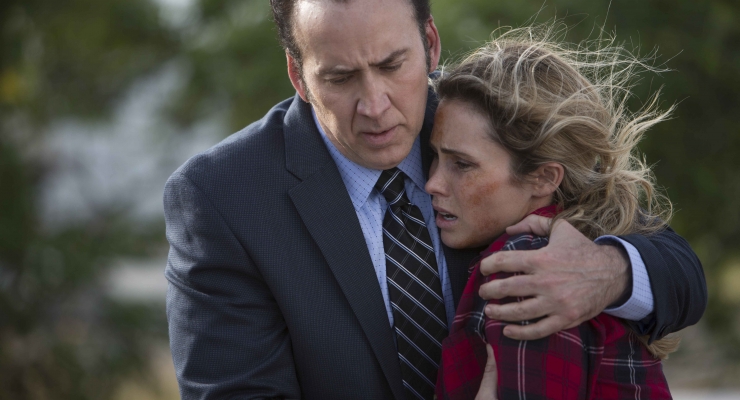 Back home, a recovering but traumatized Teena is being prepared by young assistant prosecutor Dixon (Kara Flowers) to take the stand at a preliminary hearing that could lead to the trial of her attackers. The hearing becomes a travesty, as clearly biased Judge Schpiro (Mike Pniewski) allows the slick Kirkpatrick enough latitude to outmaneuver Dixon, besmirch Mrs. Maguire’s character, and demonstrate callous disregard for the facts of the case. Teena and her daughter are next taunted by the Fick brothers and their friends and family that have packed the courtroom. After this debacle, Teena  is saved from jumping into the Falls by a quick-thinking Detective Dromoor who is now focused on meting out justice to the four criminals. Later, outside the same bar, Deluca has been viciously attacked by Casey. When Dromoor appears on the scene, Casey goes at him with a knife and receives a single deadly head shot.  One rapist down, three to go.

The film proceeds briskly to a conclusion that is dramatically inevitable and, yet, in its finale scene, disarmingly touching. Scriptwriter John Mankiewicz has skillfully adapted a 2003 Joyce Carol Oates novel and director Adam Randall delivers an intense cinematic vigilantism, in the style of Death Wish with no shortage of graphic violence. The “love story” aspect of Vengeance: A Love Story has several ramifications.  It is the love for abused women who are often trampled by a complex male-dominated legal system that, on too many occasions, seems to favor criminals over their victims. It is the love for the values that we hold dearest, founded on the principles of truth and justice. It is the love of a driven individual for those whom he has taken the oath to preserve and protect. Without much spectacular cinematography, save for the Niagara Falls scenes, there is intense  focus on the characters both good and bad that drive the action forward. It was great to see Nicolas Cage and Don Johnson together for the first time on the silver screen, the former reprising his well-established laconic persona (The Frozen Ground, Seeking Justice) and the latter once again playing an unsavory attorney (Just Legal). The real find here is Talitha Bateman (The Fifth Wave) who displays the right amount of vulnerability and resourcefulness as a young girl who becomes the support person for her badly damaged mother. A diamond-in-the-rough small movie that will completely engage its audience, particularly fans of law-and-order cinema, for the entirety of its 99 minute running time. Vengeance: A Love Story will be available on Blu-ray, DVD and VOD formats on March 20, 2017.