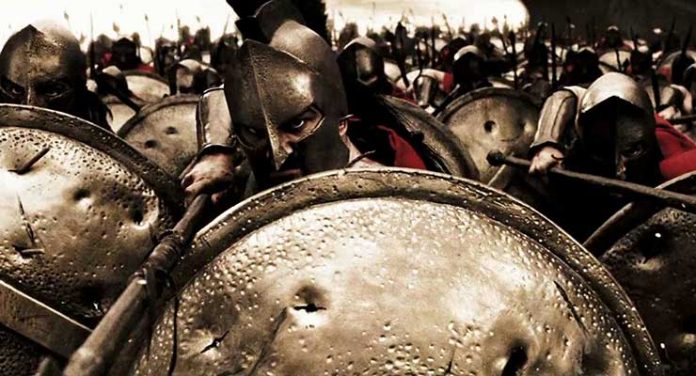 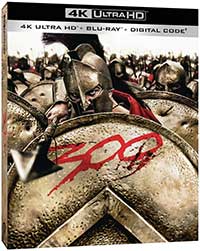 Sure, King Leonidas (Gerard Butler) and his group of muscle-clad, sword wielding warriors dish out a frenzy of testosterone-induced action with awesome bluescreen effects that will keep viewers balancing on the edges of their couches, but after a while the awful dialogue and absence of plot becomes too heavy a burden to bear over 300‘s two-hour time frame. If narration like, “the seaborne breeze, coolly, kissing the sweat at his chest and neck. Gulls cawing, complaining, even as they feast on the thousands of floating dead,” will keep you entertained, then you’ll love every sweaty, bloody moment of 300, otherwise the moments between the gore and the dazzling effects will leave you chuckling to yourself.

Of course, turning this ancient epic battle into something that will appeal to modern audiences is part of the trick. Frank Miller’s fascination with the story of the 300 Spartans as told by Zack Snyder and company on screen is rife with modern day rhetoric on patriotism and freedom. The glory of dying in battle for one’s country is bludgeoned into the heads of viewers before the literal bludgeoning begins. Therein lies the real appeal for the latter-day moviegoer — there are impalements, beheadings, and all the slicing and dicing this side of Food Network one can handle. 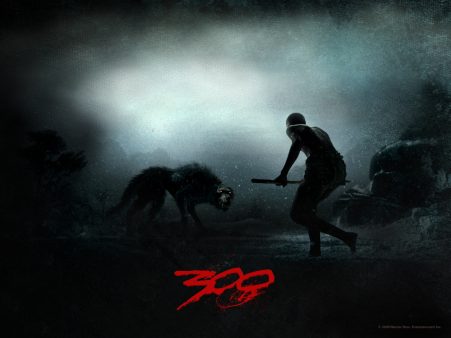 Unlike some of their other recent 4K releases, Warner does not list this as being from a new 4K master, so the likelihood is this 300 4K Ultra HD Blu-ray transfer is taken from the same 2K DI but remastered with HDR10 for this release and upscaled to 4K. It’s on this disc in an HEVC 2160p encodement with HDR10 and it looks very similar to the previous Blu-ray release as far as overall detail and that signature grainy look, which was digitally enhanced to add more “grain” on top of the natural grain from the Super 35mm film stock originally used in production. Having seen a raw still from the 2K master years ago long before it was encoded to VC-1 for the subsequent Blu-ray release, I know the film was meant to have an even crispier, grainier look than what made it onto disc. This 4K disc does seem to heighten that grain just a tad over the old Blu-ray releases. As for the HDR10, which my Pioneer Elite LX500 player’s info menu lists as having a Max. Light Level of 1000 nits and Min. Light Level of 0.0001 nits with a Max. Content Light Level of 439 nits, it is not near the best I have seen. It’s somewhat dark and the highlights don’t really ‘pop’ much. The nearly monotone/sepia tone palette doesn’t do much with the wide color gamut either. The best scene is the opening credit sequence which seems to be quite bright and colorful, but then the rest of the film settles in and becomes quite average. I’m going to say overall detail and film grain structure is great with this one, but the HDR10 color grading and dynamic range, not so good.

300 has been specifically remixed in Dolby Atmos for the home theater on this 4K Ultra HD release. The film has always been a showcase mix even in 5.1 and the Atmos mix, even though the height channels are a bit underused, is not disappointing. The high frequencies seem to have been reined in a bit making it even more listenable, low end really thumps and there’s excellent balance of sounds mixed through the surround channels. There are even some “voice of God” moments utilizing the height channels to make it sound like the sound is inside your head, such as when the Spartans are in their shield formation and speaking to each other. Great stuff!

All the special features included in this release were previously available on Blu-ray starting with the 2009 release 300: The Complete Experience.

300 can hardly be classified as great filmmaking, but it does arguably present director Zack Snyder at his best, most camp moment, reveling in the machismo, the overindulgent CGI and just the glorious, unashamed B-movie of it all. There’s almost a fetishistic level of visual effects and action in this film, taking innovations from films like The Matrix to their natural conclusion. This 4K Ultra HD Blu-ray release from Warner Bros. does have great detail, but the HDR is not the star of the show, which is disappointing. If the still superb Blu-ray, which hasn’t been remastered, added an Atmos track, it might edge out the 4K disc on everything other than the finest, high-level presentation of the grain structure in this film.