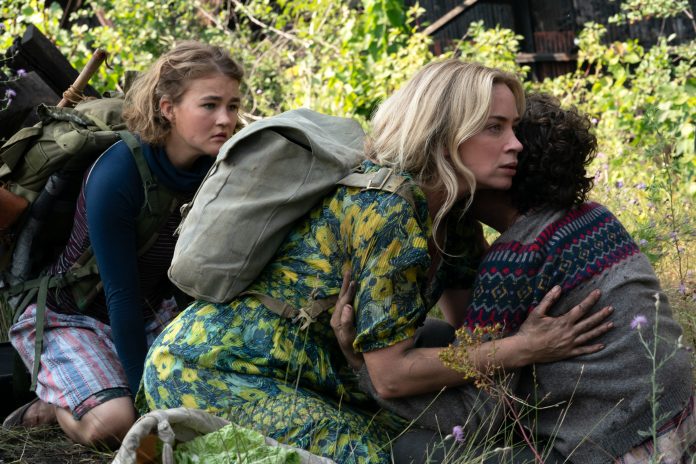 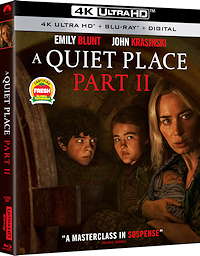 A Quiet Place Part II is the horror sequel that wasn’t meant to be, but, I mean, come on; did we really believe that a breakout hit like the first film would be the last?

The film picks up where the last one left off. After the tragic events that saw the Abbott family (Emily Blunt, Millicent Simmonds, Noah Jupe) lose their patriarch after an invasion of creatures that hunt by sound. Now writer/director John Krasinski sends the Abbot family out into the world. It’s day 437 and the family must venture out to find help and other survivors. As in the first film, Krasinski uses all the dynamics of sight and sound to make a suspenseful thrill ride of a film.

The Abbots reach what seems like a haven when the find an old friend, Emmett (Cillian Murphy). Emmett is living like a hermit, filled with grief and angry about his loss. He does not want them there with him, but circumstances cause the characters to end up together for a while and eventually some will go their own way. Regan (Millicent Simmonds) decides to go off on her own in search of a radio signal playing a tune she believes is a signal. Emmett is convinced by Evelyn (Emily Blunt) to go after her while she stays behind with the newborn and an injured Marcus (Noah Jupe).

Krasinski uses silence to his advantage. When there is sound it is heightened. Often the shift between the atmospherics of the surroundings or the ultra-silence of the hearing-impaired Regan’s world highlights the threat of the creatures stalking the humans. That the film still manages to draw viewers into its world even though the novelty was pretty much blown after the first film. There’s nothing in this second film that’s original per se, but it is just a little more expansive and Millicent Simmonds drops nothing stepping into the lead role occupied by Krasinski in the first film. Her ability to emote, her physicality, everything she does keeps our attention. This is one of the better sequels for a horror film to come along in recent years.

A Quiet Place II was shot on a combination of the Arri Alexa Mini with Panavision T-Series lenses and Panavision Panaflex Millennium XL2 with Panavision Primo and T-Series lenses in 3.4K (Arri) and on 35mm Super 35 (Panaflex) film stock. It uses a 4K DI and has Dolby Vision HDR. On 4K Ultra HD it arrives in a 2.39:1 HEVC 2160p (4K UHD) encodement. The image looks very filmic. There is hardly any discernible difference between the Super 35 and 3.4K source. Fine detail is crisp with extended front-to-back detail. There are only the occasional frames where things look a little bit soft or too gritty, more having to do with the production than the encodement. The WCG of Dolby Vision adds an almost three-dimensional appearance to flames thanks to the extended color gradations and specular highlights. Comparing the included Blu-ray, the flames on the Blu-ray look flatter and more a pale yellowish hue where the 4K shows more colors from dark orange to yellow and amber. The Blu-ray also resolves the “grain” a little more diffusely than on the 4K disc. But don’t get the wrong idea, both of these discs is reference, it’s just in a side-by-side, the 4K edges out the Blu-ray in detail, color reproduction, and highlights.

A Quiet Place Part II on 4K Ultra HD (and the included Blu-ray) comes with a Dolby Atmos mix. Just like the first film, this is pure reference material. One wouldn’t think that a film like this would make for great reference material, but it sure does. The height awareness is off the roof, pun intended. The clicking sounds of the monsters bounce around the room, ambient sounds like breezes through trees, dripping water, and in chapter 12 we get a lot of explosions and the sound of a sprinkler system opening up the soundstage. The LFE is really extended into the depths of the lower frequencies providing some room shaking rumbling.

The series of ‘making of’ featurettes are pretty good, offering some quick insights into the production of the film.