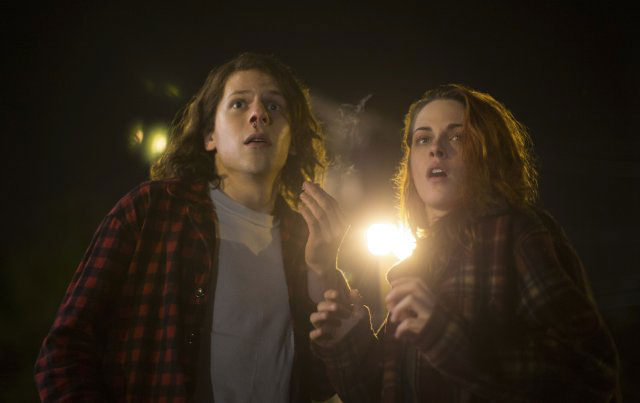 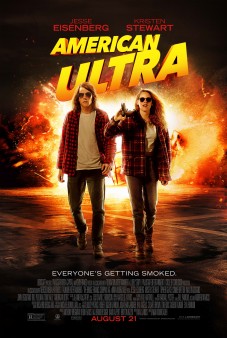 Take a bit of a James Bond movie, another part from Cheech & Chong, and mix it up with elements of the recent film Spy and out comes the new movie American Ultra.

American Ultra is a spy action thriller movie masquerading as a stoner film (have a look at the film poster and you’ll see) with lots of lots of comedy. And once it’s over you think the person who wrote the film (Max Landis) must’ve been high on something when he wrote it. Mike (Jesse Eisenberg, The Social Network) and Phoebe (Kristen Stewart, The Twilight Trilogy) are, basically, potheads, living in what seems like a very empty town in West Virginia. They’ve been together for several years, with Mike never getting the courage to ask her to marry him. He’s booked a trip to take her to Hawaii to propose but he’s afraid of flying so they never actually get on the plane. But Mike’s content with his job as a cashier at the local Cash & Carry, where there never seems to be any customers. But he’s not the person you think he is. He’s actually a sleeper agent, a machine, created by the CIA, and they want him terminated — NOW. So one day at his store walks in CIA agent Victoria Lasseter (Connie Britton). She’s come to town to rescue him – Mike was an experiment she created so she feels the need to play mother and protect her offspring. Mike has no idea who she is – but she’s able to activate him – turning on his superpowers so that he can protect himself. But CIA supervisor Adrian Yates (Topher Grace) wants him destroyed — at all costs. Even if it means killing Agent Lasseter in the process. So he sets up a command post in Mike’s town to look for him and to have him killed, bringing in tow with him soldiers who used to be mental patients. So in between all this we get explosions, lots of gunfire, and a visit to the home of Mike and Kirsten’s pot dealer (John Leguizamo) where they go to hide. It all leads up to an extremely bloody conclusion in the town’s discount superstore (à la Walmart). 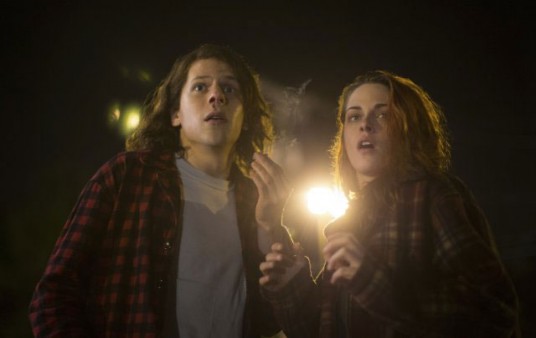 As mentioned earlier, American Ultra‘s script is so far out there that one wonders where Landis (son of director John Landis) got his idea for the film. And Director Nima Nourizadeh (whose only other directing credit is 2012’s Project X where three high school seniors host a party that spirals out of control). Nourizadeh keeps the action, which takes place over the course of one night, going throughout the film, but he can’t help but let the silliness of the plot take over. Mike and Kirsten seem to be the most sensible people in the film, whereby the CIA agents are badly drawn as buffoon carton characters who can’t pull off their mission. American Ultra reminds me a bit of This is the End — Seth Rogen and James Franco’s 2013 comedy about the end of the world — where it just keeps on getting funnier and more surrealistic. American Ultra, even though it looks slick, seems to be missing the ingredients that made This is the End memorable. And while it’s a good ride that may make you high from just watching it, it’s also very silly to be taken as a true comedy. American Ultra is not as good as a Bond film, but, in it’s favor, it’s not as bad as Spy.

American Ultra is now out in theatres.