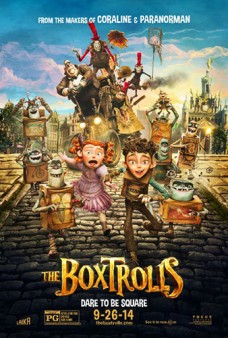 The Boxtrolls is being billed as a family event movie from the makers of 2009’s Coraline, a stop-motion 3D dark fantasy film. And The Boxtrolls is also dark, one of the darkest animated films to be released, since perhaps Coraline.

It’s a story of a different type of animated character. The audience is introduced to a family of boxtrolls, a community of creatures who have raised a human boy. These creatures come in all shapes and sizes, however, the commonality amongst them is that they wear recycled cardboard boxes the way turtles wear their shells. So it’s easy for them to hide when they face danger, and even when they go to sleep – all they have to do is scrunch themselves into their boxes. 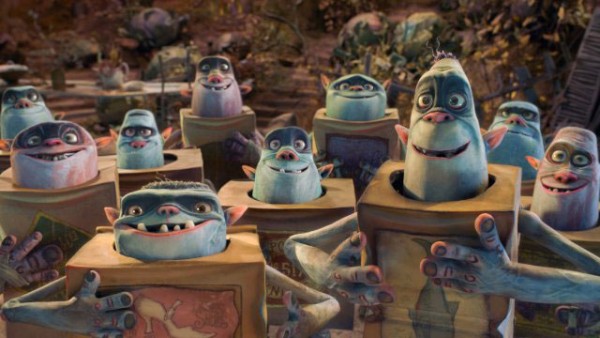 Eggs (voiced by Isaac Hempstead Wright) was accidentally thrown out of his house when he was a baby and was picked up by one of the Boxtrolls and taken to their community – a cavernous home the Boxtrolls have built beneath the cobblestoned streets of a town called Cheesebridge, where it’s citizens call them monsters. Their underground home is their oasis, as dirty and smelly as it is, with bugs and insects all over the place, literally climbing all over them all the time. Their home is dark, polluted, and probably an unsafe place to raise a baby boy. They spend their days happily underground but their nights foraging the streets for anything to take back home with them, combing the cities streets for garbage to take home with them – the human’s trash becomes the boxtrolls’ treasure. And it’s really strange that an animated movie is set in such a location.

The Mayor of Cheesebridge, Lord Portley-Rind (Jared Harris) is not a fan of the boxtrolls — he believes the scary stories about them that has been spread by the villainous Archibald Snatcher (Ben Kingsley). Snatcher is determined to be accepted into Lord Portley-Rind’s elite group of crony men, so he has imprisoned genius inventor and a friend of boxtroll Herbert Trubshaw (Simon Pegg) and is leading a gang to capture all of the boxtrolls — they call themselves the exterminators of justice. So one by one the boxtrolls are picked up at night while they are on the city streets. 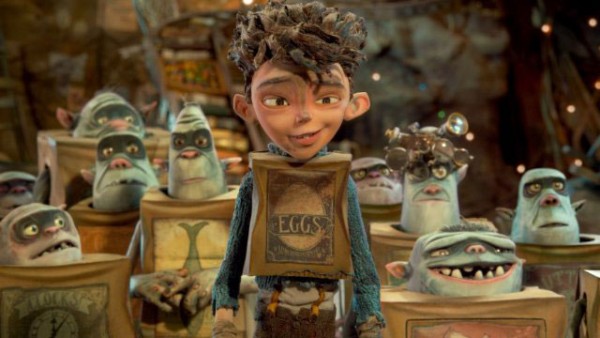 Eggs befriends a local girl, Winnie (Elle Fanning) — who happens to be Lord Portley-Rind’s daughter. She helps him integrate back into normal society and together they devise a scheme to save the boxtrolls from Snatcher. They do whatever it takes to find the captured boxtrolls and take them back to their dumpy home. 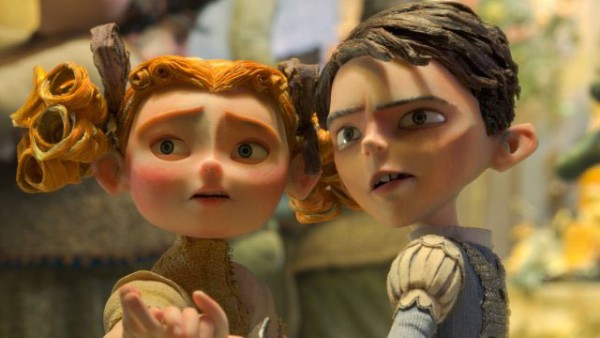 The Boxtrolls, just like Coraline, is a stop-motion animated film, which is shot frame by frame. What sets The Boxtrolls apart from previous stop-motion animated films is that it is a period piece, and a mash-up of comedy, detective story, and adventure with a unique perspective as an animated film. Alan Snow’s Here Be Monsters was the source material for the screenplay of The Boxtrolls — a tale of a boy adopted by a group of kind creatures. They are kind, but they are ugly as well. And the environment in which they live is not a very hospitable one to humans, much less to a human baby boy. But Eggs grows up with them, and gets used to the vile conditions. The film is like a Charles Dickens story with some very dark emotional emotional turmoil for our protagonists. It’s also scary as we get the mean Snatcher who manipulates the residents of Cheesebridge into fearing and hunting the boxtrolls — and when some are captured the scenes are not particularly joyful. The imagery and feel of the film is dark, and I’m not too sure that younger children will appreciate the story of how a community of monsters living underground is a fun thing. The Boxtrolls is perhaps a film for older children and their parents, but please leave the younger ones home with a babysitter.

Tim Baros is a London-based freelance writer for The American and Pride Life magazine and websites, as well as www.hereisthecity.com. You can find all of his articles on www.theentertainmentwebsite.com
Advertisement
Share
Facebook
Twitter
Pinterest
WhatsApp
Previous article
Audrey Hepburn Collection Blu-ray Review
Next article
Gone with the Wind: 75th Anniversary Edition Blu-ray Review