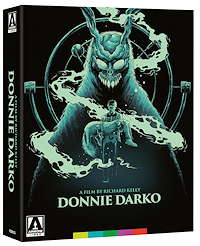 Writer/director Richard Kelly’s overwhelmingly dark, intense, and moody film Donnie Darko arrived in theaters at the worst possible time. The country was still in shock from the 9/11 terrorist attacks and the weighty endeavor that was Donnie Darko was perhaps too dark and psychologically taxing for the nation’s psyche to bear just yet.

Donnie Darko slipped quietly away from theatres due to lack of promotion and apathy on the part of the viewing public and many critics. Over the years, however, the film kept a foothold in the minds of the public through late night showings and word-of-mouth. Building up to cult status, Donnie Darko has become one of the modern classics of cinema over the intervening years as its star, Jake Gyllenhaal, has steadily risen to greater successes as well.

Set in the 1980’s during the Bush and Dukakis presidential elections, Donnie Darko is an atypical yet easy mixture of suburban drama, fantasy, science fiction, religion, physics, and psychological thriller. Gyllenhaal plays the eponymous role. He’s a high school kid in an average suburb suffering through a torturous high school career. But Donnie is having issues. He’s been sleepwalking and waking miles from home, so he sees a psychiatrist. Soon, however, an imaginary friend who tells him exactly when the world is going to end is visiting Donnie. Or is the friend imaginary? Has Donnie been slipping through time, different universes? Or is he lapsing into a complete mental breakdown?

Kelly keeps the film interesting at every turn. It never lapses into the world of sublimely ridiculous sci-fi, but, rather, it remains a contemplative journey that encompasses religion, philosophy and science seamlessly. Aiding the drama are the carefully placed songs of the ‘80’s, chosen for their mood more than for their familiarity.

This release comes with new 4K restorations of both the Theatrical Cut and the Director’s Cut of Donnie Darko from the original camera negatives by Arrow Films, supervised and approved by director Richard Kelly and cinematographer Steven Poster. The transfer appears in a 2.35:1 HEVC 2160p (4K UHD) encodement with Dolby Vision (HDR10 compatible) on 4K Ultra HD Blu-ray. I received only the Disc One/Theatrical Cut pre-production disc from the studio so that is the only one I was able to screen.

This film has never looked the greatest given it was a low budget indie production, the artistic choices leave it with a cool, muted palette and with a lot of black crush in the shadows and that is still the case here, but as with all of Arrow’s own UHD restorations of catalogue titles we have seen so far, they present Donnie dark in a very natural, organic, and pleasing way. There’s a layer of grain that looks consistent and not overwhelming, the image is cleaned up but not scrubbed to the point of looking like a contemporary digital production, and the Dolby Vision is used subtly. The opening scene with Donnie laying in the road shows some very nice color gradations in the skies over the mountains. Specular highlights show very nice ‘pop’ but not a gimmicky amount of extra brightness. Look at the lamp in Donnie’s dark bedroom in Chapter 2 around the 00:08:31 mark for example or how the chandelier really glistens in the same chapter at the 00:10:49 mark. It’s a another beautiful restoration from Arrow.

Donnie Darko is provided with the DTS-HD Master Audio 5.1 mix that has been included with the previous Blu-ray release for this title from Arrow. I was never too fond of this mix but have warmed to it over the years. It sounds natural has good dynamics when the big explosion occurs along with some solid foley effects in the surround channels and the 1980s soundtrack sounds very musical. Dialogue comes across clear and intelligible.

I was only sent a check disc for the first disc in this set so have only been able to directly check the special features on the first disc. That said, this is a loaded set from Arrow as usual and is also packed with tchotchkes.

This cult classic has never looked or sounded better and Arrow packs it with bonus features and extras making it well worth a double-dip.

Load more
Donnie Darko (2-Disc Limited Edition Collector's Set) (4K Ultra HD Blu-ray Review)A troubled teenager (Jake Gyllenhaal) whose family escapes a bizarre accident begins having visions of a man in a large rabbit suit, believes the world is coming to end, and he must stop it leading to him committing a string of crimes in this dark fantasy cult classic from Richard Kelly set in the 1980s with a backdrop of classic songs from the decade.