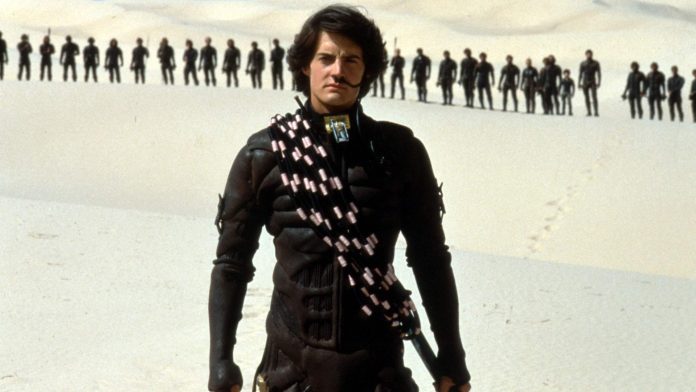 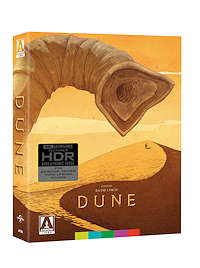 Hot off the success of The Elephant Man (1980), David Lynch turned his attention to adapting Dune, the successful Frank Herbert sci-fi novel that had been knocking about for years in Hollywood with people trying to adapt what had been become known as an unadaptable novel. Even Alejandro Jodorowsky (The Holy Mountain, El Topo) left an uncompleted adaptation of the novel that never made it to the filming stage.

Lynch worked under the famed executive Dino De Laurentiis and Rafaella De Laurentiis stepping in as producer in place of her late brother. He would take the story set in 10,191 on far away worlds under a neo-feudal order all under the control of Padishah Emperor Shaddam IV (José Ferrer) and turn it into a somewhat rambling, dark, and incomprehensible tale about the young hero Paul Atreides (Kyle MacLachlan) son of the Duke of House Atreides Leto (Jürgen Prochnow), who rules with the help of his concubine Jessica (Francesca Annis). Paul is at the center of an ancient prophecy and the central conflict is the substance called “spice” that everyone needs to extend their lifespan and expand their minds. It is mined on the dry desert planet Dune. The problem is the people mining the spice, the Femen, are in virtual slavery and Paul is prophesied to be the savior who will free them and overthrow the ruling order. Paul becomes romantically entwined with a Femen woman (Sean Young) he has seen in his dreams.

Herbert’s long and complex writing is edited down to a surreal Lynchian tale that doesn’t always make much sense, especially if you have never read through the novel. But Lynch isn’t entirely to blame. He was brought onboard to direct by De Laurentiis solely on the success of The Elephant Man, with De Laurentiis not knowing of Lynch’s previous, more artsy work Eraserhead. When Dino De Laurentiis saw the direction Lynch’s Dune was taking, pressure was placed on Lynch to go more commercial. To edit the length, budgets were slashed, in effect, he was not free to complete his vision.

Still, we get a visually stunning picture that is filled with some impassioned performances and score by pop-prog band TOTO that sets the moody atmosphere in much the same way the Vangelis score did for Blade Runner (1982). These elements and Lynch’s obvious abilities to bring his viewers into an off-kilter world have helped to make this flawed film a cult sci-fi favorite. The film also stars Sting in a small but scene stealing role as Feyd Rautha.

This is a brand new 4K restoration of Dune from the original camera negative. The film was originally shot on the Arriflex 35 BL2 and Photo-Sonics 4E cameras with Todd-AO (anamorphic) lenses on Eastman 125T 5247 and 400T 5294 filmstock. The new transfer uses a 4K DI and has Dolby Vision HDR. There is a natural grain structure that is maintained throughout the film and very crisp detail. The Dolby Vision is subtly applied, so it doesn’t make this catalogue film look gimmicky in anyway, or too bright or too dark when compared to the newly restored Blu-ray. In in fact the difference between the two is very slight. With the 4K you get better resolved film grain and a little more ‘pop’ in the colors, such as the greens in Chapter 4 or the glowing orange and amber in flames, or the specular highlights in some lights. Blacks are nice and inky across both discs, but crush isn’t an issue. You can see the detail in cloth on costumes or the formal uniform of House Atreides with just the slightest amount of light cast upon them.

Dune ran in theaters with a 6-track mix for its 70mm blow-up and in Dolby Stereo. On 4K Ultra HD it comes with DTS-HD Master Audio 2.0 stereo and DTS-HD Master Audio 5.1 mixes. Both mixes sounds great with wide panning, clear dialogue, and good dynamic range, but it is the 5.1 mix that takes things to another level spacing the score out through the channels with superb dynamic range and placing foley effects around the room. Action scenes get deep lows and lots of wide side panning with strong use of the surrounds.

As always, Arrow loads this set up with collectibles and bonus features. See the list below of what you will find in this two-disc set.

Arrow have delivered the good once again for this cult favorite providing a reference catalogue restoration on 4K packaged with a treasure trove of collectibles and bonus features. This is a must for fans and collectors.