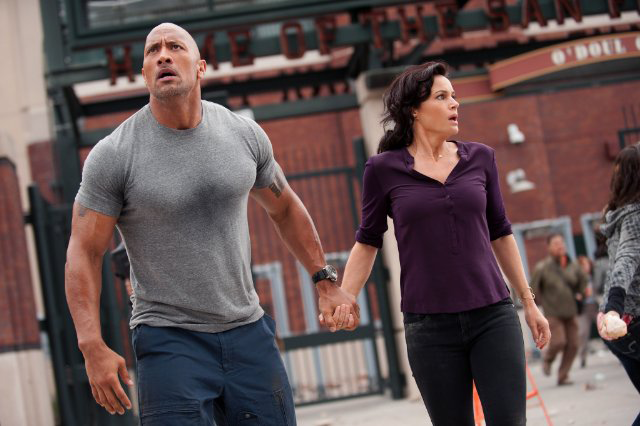 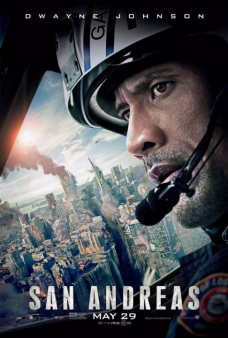 The eagerly-awaited film San Andreas is one of the worst scripted films in recent memory. It’s also a very frightening and almost realistic look at what could happen to California if a major earthquake takes place.

San Andreas, in case you didn’t know, is a fault line that runs roughly 801 miles through California. It’s a tectonic plate that, scientists confirm, will shift, hence causing a major earthquake in that region. The film San Andreas imagines this catastrophe, which practically ruins the state of California, first by earthquakes, and then by a massive tsunami. It’s bone-chilling yet stupid.

The film begins with a young woman driving along a cliff who is distracted by her cellphone. A rock slide takes place, causing her to drive off the cliff with the car nestling on the edge of some rocks, hanging by a thread. Swooping in is Ray Gaines (Dwayne ‘The Rock’ Johnson), a Los Angeles Fire Department search and rescue helicopter pilot, who comes to the rescue with his team and saves the girl. It’s a metaphor for real events in his life; his youngest daughter drowned and he’s still feeling mega guilty about it. It was also an event that led to the breakup of his marriage to Emma (Carla Gugino), and led her into the arms of mega millionaire building developer Daniel Riddick (Ioan Gruffudd). Ray soon discovers that Emma will be moving in with Riddick, taking along their only daughter Blake (Alexandra Daddario). 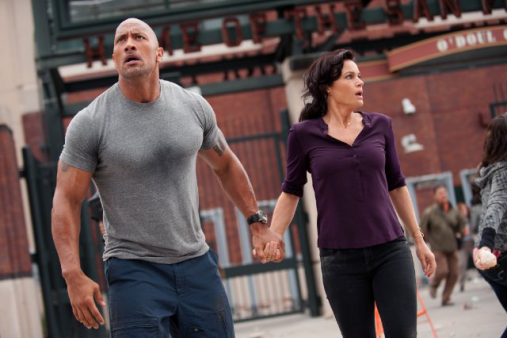 Meanwhile, scientist Lawrence (Paul Giamatti) and his team discover a previously undetected fault line near Nevada’s Hoover dam. They go there to inspect it, and while they are there, on top and inside the dam, a major earthquake hits. Lawrence is sparred but a member of his team is killed while trying to save a young girl. This earthquake triggers the San Andreas fault line to become active, setting off a massive earthquake up and down the coast of California. Buildings shake violently then fall down, many people die by getting crushed, while Emma is dining at a posh restaurant (with Kylie Minogue). She phones Ray for help and is preposterously saved by him and his helicopter while the building underneath her is collapsing. They then go on a mission to find their daughter, who is in San Francisco with Riddick. 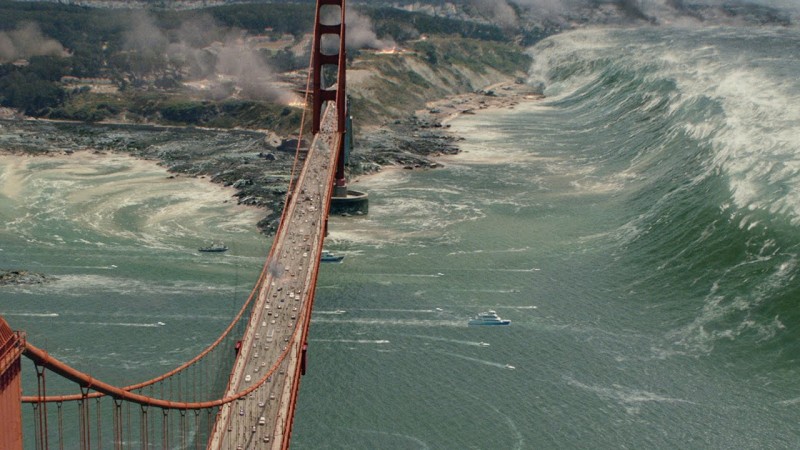 San Andreas then becomes not just a disaster movie but an unintentional comedy. In one scene, Blake asks Riddick why he never had any children. He points to a brochure of his buildings and says ‘these are my children.’ Also, in what can be described as the worst line in screen history, Ray tells Emma ‘It’s been a while since I got you to second base’ after parachuting into San Francisco’s AT&T Baseball park after enduring death and destruction and also almost losing their lives. And it gets worse. The San Francisco skyline changes from scene to scene (and not just because some buildings fall down) — San Andreas gets worse and unbelievable as the characters continue to survive.

And when you think the characters (and you) have had enough, a Tsunami starts to form. Emma and Ray ride into the tsunami on a boat that literally pitches up vertically, only to be sucked under a massive cargo ship — and they survive. And most stupid of all is that, they actually do find their daughter, trapped inside a building with a young British man and his younger brother (both with posh British accents) — and they seem to be the only people who have survived in San Francisco. The filmmakers have obviously applied creative license to a real-world threat, but with a horrible script and unbelievable life and death situations, San Andreas is a fault that never should’ve woken up.