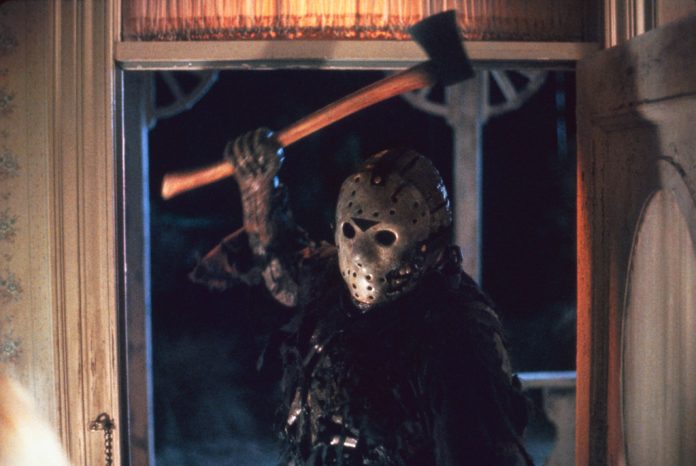 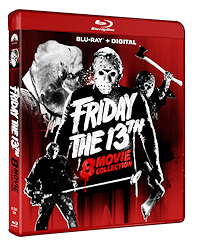 This 8-Movie collection of Friday the 13th brings together the remastered first four films of the popular horror franchise plus Parts V-VIII. Since these films are well known to most horror fans and this is a rather massive collection and somewhat beyond the scope of this review to go into a detailed film review of each film, I’ll give an overview of the basics.

The franchise began in 1980 with the title Friday the 13th, directed by
Sean S. Cunningham as basically a copycat of Halloween, but quickly grew into its own schtick. This film didn’t even feature the franchise’s trademark antagonist, Jason Voorhees, but it did feature his mother, as a group of kids at a summer camp, Camp Crystal Lake or Camp Blood, as it would come to be known because of all the murders, are stalked by an unknown assailant. Part II finally brings in Jason Voorhees, but without the famous hockey mask and kids in a camp next to the infamous Camp Blood are stalked by Jason. Part III is where the franchise really starts to hit its stride as Jason Voorhees stalks a group of college kids in a cabin near Crystal Lake. Shot for 3D, this one may look a little strange today watching it in 2D with all of the obvious “made for 3D” camera angles and objects sticking out at the camera, but it still works. Finally (sort of) is The Final Chapter that is both bloody, funny, and the most exploitative of the first four. We get full-on Jason, hockey mask, back from the dead, and on a killing spree on his way back to Crystal Lake. After this the franchise goes on a bit of cruise control and reinvention, basically relying on its horror bona fides and the draw of Jason Voorhees. It’s a brand now. The New Blood brings in a girl with telekinesis, going paranormal, Jason Takes Manhattan, well, puts the slasher in Manhattan as high school students inadvertently bring him to the Big Apple where he can wreak havoc. It’s all gimmicky after Part IV. I guess the same amount of thought that went into the films after the first four went into this collection from Paramount as they haven’t even bothered to remaster the last four in the set.

Only the first four films in this collection have been remastered. The last four films are repackages of the Warner Bros. double feature releases although all signs of Warner logo and startup screen have been stripped. They obviously have the old-style Warner Blu-ray menus.  That said, one through four look pretty darn good, with their AVC 1080p encodements and OARs. I would give the edge out of all four to Part IV since it looks the cleanest and crispest of the group, probably due to expanding budgets and the updated production techniques. Although it has a solid transfer, the look of Part III suffers from the soft focus of much of the scenes due to it having been shot originally for 3D. Anything to high contrast would likely cause ghosting.

Moving on to Parts V-VIII, all I can say is they look as they did when they first hit Blu-ray, which isn’t great. Part V looks about the best of the bunch, but it is sort of soft and dull with background detail quickly falling off. Part VI looks the worst with a lot of frames where dirt and scratches are very evident.

Each film has an English DTS-HD Master Audio 5.1 mix but only two through four are also supplied with the original English mono in Dolby Digital. There are also various foreign-language dubs and subtitles supplied. The monaural mixes will be the most authentic, but also pack the least punch. They have done a great job expanding the soundstage, especially on the remastered discs. The score, especially the now-famous “choo-choo-choo-ha-ha-ha” sound effect pans back and forth and through the surrounds. Rainstorms, which occur rather frequently in this franchise, also surround one nicely and thunder hits with good low end.

The bonus features will be familiar to most who have owned these films on various formats or own the Camp Crystal Lake Blu-ray release and different releases of these films over the years, such as the most recent Scream Factory collection or the Warner Bros. double-feature discs.  Most disappointingly about this collection from Paramount is Part IV’s bonus features are all in SD. Digital copy codes are included for each film in the collection as well.

This collection may be fine for fans who missed the Scream Factory set which not only offers more films but also has them in better picture quality. This set may be only worth it for the remastered versions of I-IV, which look and sound great but also don’t offer any new bonus features. For completists only.