The third time’s a charm and for the third Harry Potter film, Harry Potter and the Prisoner of Azkaban, with a new director in tow, Alfonso Cuarón, the franchise was hitting on all cylinders. It’s titular character (Daniel Radcliffe), now not quite as naïve or as young anymore, finds himself the target of Sirius Black (Gary Oldman), a prisoner escaped from Azkaban prison. Furthermore, Harry is strangely affected by the wraith-like, soul-sucking beings that guard Azkaban, the Dementors, that are now on guard at Hogwarts and on the hunt for Sirius Black.

This third film in the Potter franchise gets much darker than the previous two films combined, but it also balances things out with some lighthearted comedy, such as Ron’s (Rupert Grint) constant confusion at Hermione’s (Emma Watson) seeming ability to be in two places at once.

At this stage in the three young actors’ careers, it might have been difficult to transition the franchise from the earlier, more childlike wonder of Chamber of Secrets, to this adolescent stage, but Cuarón handles it wonderfully without getting too bogged down in pubescent angst and letting the adventure and dread of Rowling’s source take precedent. The awkward moments happen naturally, like a handheld in fear or when Hermione stresses about how her hair looks from the back.

The Prisoner of Azkaban is the perfect coming of age film for the Potter franchise – it tips over just a bit into the world of dark fantasy and psychological drama, it satisfies more of what fans of the books wanted from the previous films, and it feels like a wholly satisfying entry in this mega-smash series. 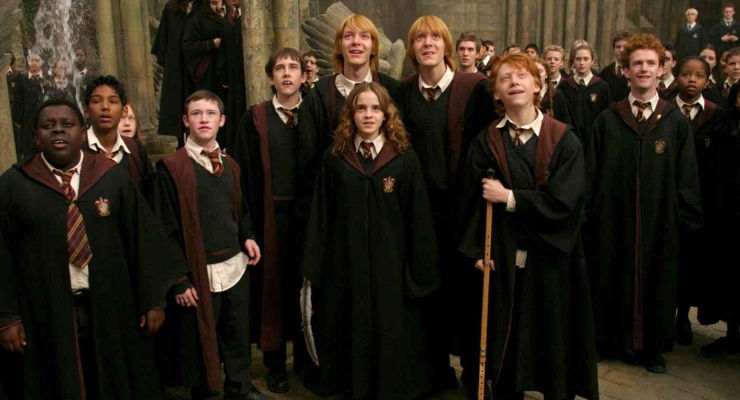 Harry Potter and the Prisoner of Azkaban is an anamorphic Super 35, 35mm production shot on Kodak Vision2 500T 5218 and Vision 200T 5274 film stock with Arricam LT and Arriflex 435 cameras and Cooke S4 lenses. This 4K Ultra HD Blu-ray release arrives in a HEVC 2160p (4K) encodement with HDR10 high dynamic range (HDR) framed at 2.40:1. The film structure is well-preserved, looking quite normal for a Super 35 source, which is to say it can at times look a bit coarsely grainy, but not terribly so. As with the previous Harry Potter 4K Ultra HD releases, the colors look gorgeous and the highlights ‘pop’ really nicely. Flames have beautiful amber glows, darkened rooms have far more nuance now and so forth. This films really come alive again in comparison to the also good, but not quite as strong Blu-ray discs that don’t bring the color and VFX alive in the same way and have a bit more crush.

Another spectacular English DTS:X mix accompanies this Harry Potter and the Prisoner of Azkaban reissue on 4K Ultra HD. From its deep, extended low end to the balance of solid sound effects that move around the room and overhead to the lush atmospherics of the John Williams score, this one is top-notch.

Harry Potter and the Prisoner of Azkaban was at that point the best film in the Harry Potter franchise. It had an excellent performance from Gary Oldman and David Thewlis, plus a slightly more grownup, and darker overtone. This new 4K Ultra HD transfer with HDR and DTS:X audio mix is a brilliant home theater experience not to be missed by any fan.

Harry Potter and the Prisoner of Azkaban is out now on 4K Ultra HD Combo Pack from Warner Bros.