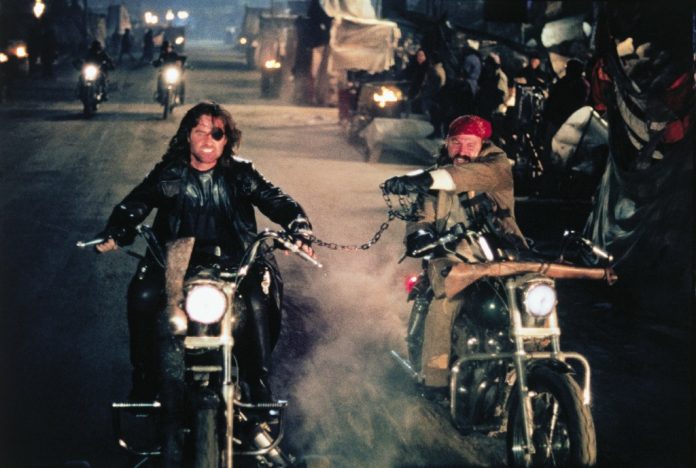 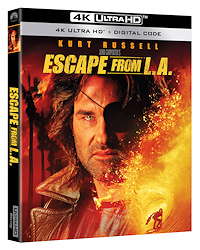 In Escape from L.A., it’s fifteen years after Snake Plissken (Kurt Russell) first broke into the heavily fortified prison island of Manhattan in 1981’s Escape from New York, which was set in 1997. Now, with Los Angeles finally hit by the big earthquake that causes it to break away from the mainland. America’s ultra-religious President-for-Life (Cliff Roberton) is using the island of Los Angeles to exile all the people deemed undesirables, such as those who used to be gathered on the island of Manhattan. Snake is once again called into action to break into this island prison, under threat of a bio-engineered virus they’ve managed to infect him with. The president’s daughter has stolen a “block box” doomsday device and joined a resistance group in L.A. lead by Cuervo Jones (Georges Corraface) who is determined to overthrow her father’s cruel authoritarian rule.

Escape from L.A. is chock-full of action and a good performance from Kurt Russell, but pales in comparison to the 1981 original film. There are some B-movie, exploitation homages sprinkled throughout, starting with the casting. The likes of Pam Grier, Cliff Robertson, and Bruce Campbell injects some schlock, but it doesn’t really help to elevate the film or keep it in the same league as Escape from N.Y. Perhaps a fifteen-year gap was just too long. This film is still some good popcorn fun, especially on this 4K release.

Escape from L.A. was shot on Panavision Panaflex Gold II with Panavision E-Series lenses using 35mm Eastman EXR 100T 5248, EXR 200T 5293, and EXR 500T 5296 film stock. By all accounts, this 4K Ultra HD Blu-ray release is taken from the same restoration that was used for the Scream Factory Blu-ray release and the 4K UHD digital releases. It appears in an HEVC 2160p (4K UHD) Dolby Vision HDR encodement framed at 2.39:1. We get a very nice upgrade over the digital 4K, so certainly an upgrade over the Blu-ray as well. The detail isn’t always perfect but given this is a film from 1996 with a heavy dose of visual effects – some that are really exposed and don’t standup too well under the exposure of 4K – this transfer is very satisfying. The film grain, which stays rather thinly layered, is organic and I don’t see much evidence of smearing or excessive DNR. The colors from the application of the Dolby Vision really come into play with the various deep amber flames that ‘pop’ nicely from the screen or flashes of gunfire, the glint of light off metal.

Escape from L.A. comes with an English DTS-HD Master Audio 5.1 mix. This mix has some very good aspects, those being the very deep low-end extension that can be floorboard-rattling during explosions and lots of solid mixing of sound effects through the channels. That said, the dialogue is also pumped up through the surround channels, often causing a subtle ‘Voice of God’ effect, making it sound as if people directly on screen are coming from behind or slightly from the sides even. This gives the mix an almost reprocessed 2.0 feel that is a bit distracting.

This release of Escape from L.A. only comes with the theatrical trailer on-disc and a Digital Code.

A very visually satisfying 4K release but it’s barebones, and the film is not as good the original.

John Carpenter’s Escape From L.A. is out on 4K Ultra HD + Digital February 22, 2022 from Paramount

Load more
John Carpenter's Escape From L.A. (4K Ultra HD Blu-ray Review)15 years after breaking into a fortified Manhattan, Snake Plissken (Kurt Russell) is once again brought in, this time to break into Los Angeles, now a breakaway island off of mainland United States after a devastating earthquake, where he must recover a doomsday device stolen by the authoritarian President-for-Life's daughter.