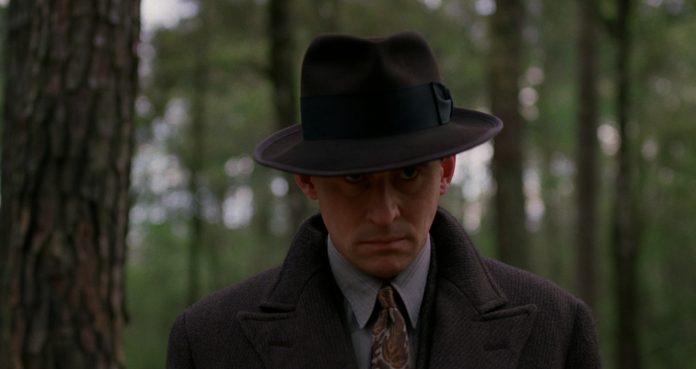 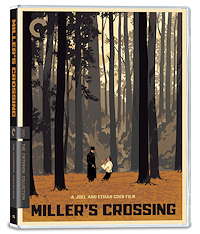 The third feature film from the Coen brothers, Miller’s Crossing is a hard-boiled neo-noir based on the novels of Dashiell Hammett (Red Harvest, Glass Key) with slick cinematography by director of photography Barry Sonnenfeld.

Set during the Prohibition era, Gabriel Byrne stars as Tom Reagan, the top dog for Irish mob boss Leo (Albert Finney). From the very beginning things are complicated as Tom is involved with Verna (Marcia Gay Harden), Leo’s much younger mistress, behind his back. Further complicating the situation is Verna is the sister of bookie Bernie Bernbaum (John Turturro) that the Italian mobster Johnny Caspar (Jon Polito) and his secondhand man Eddie Dane (J.E. Freeman) want killed because they claim he has been leaking details on Caspar’s leaked fights to gamblers. But Bernie is also paying for protection to Leo, and when Leo finds out about Tom and Verna, it puts him on the outs with both Leo and he goes to work with Johnny Caspar, putting him squarely in the middle of the gangland war and the uneasy role of peacemaker as his loyalties remain squarely with Leo.

The Coen’s give us a tasty bit of neo-noir, even more beholden to the classic film noir style than their sizzling debut Blood Simple, with this outing. From the colorful dialogue (“The two of us Tom, we’re about bad enough to deserve each other”) to the gritty, and almost melodramatic acting. The evocation of the 1930 and 1940s noir classics is nearly flawless without being a merely imitation. This is a modern take on the old genre and at the time (1990) was arguably one of the best neo-noirs to hit the screen since a film like Chinatown or The Long Goodbye.

Yes, this Criterion release of Miller’s Crossing is a filmmaker approved restoration done in 2K from the original 35mm camera negative and supervised by the original director of photography Barry Sonnenfeld. The issue is this is the same transfer from the 2011 Fox Blu-ray release, which accounts for why it is only a 2K restoration and why it doesn’t quite look up to the standards of a new restoration. While this isn’t bad by any means. The deep focus shots have a hint of softness that could use a little more high frequency information from a new 4K restoration. The the grain structure looks good, but one can’t help but feel this would look a little crisper, a little more sharper-edged, if this were a newer 4K restoration.

This comes with a new 2021 5.1 remix in DTS-HD Master Audio that is good for this film. It hasn’t been overdone. The surrounds carry a good bit of atmospheric foley effects and there’s a fine balance to the mix. The dialogue is clean and the Celtic-inspired score sounds sweeping and natural.

The real treat for this new release from Criterion Collection are the all-new extras included on disc and the essay. There are four new interviews with the cast and crew plus about 14 minutes of archival interviews.

A fantastic neo-noir of tangled relationships, backstabbing gangsters, salacious affairs, and pulpy dialogue with gorgeous set designs and cinematography in a Criterion Collection release with a strong selection of new interviews. Despite being a nine-year-old restoration, this release is still satisfying and worth owning for the extras and new 5.1 audio mix, especially if you don’t already own the previous 2011 Blu-ray release from Fox.

Load more
An Irish gangster during Prohibition gets caught between his crime boss, the girlfriend who is also sleeping with his boss, her bookie brother, and the Italian mobsters who want the brother killed for leaking their fixed fights to his customers in this hard-boiled neo-noir which was the third feature from sibling filmmakers Joel and Ethan Coen. Miller's Crossing (Blu-ray Review)