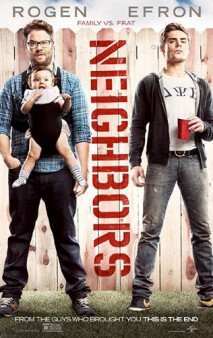 Mac and Kelly Radner (played to perfection like a real couple by Seth Rogen and Rose Byrne), live on a quiet, tree-lined street with their absolutely adorable daughter Stella, who is perhaps the cutest baby ever to appear on screen. One day, they look outside the window and see a moving truck at the house next door. They go outside to see who is moving in, in the hopes that it is a couple, with children, hopefully playmates for their baby girl. Instead what they encounter is a bunch of young men moving into the house, not just young men who are sharing the house but an actual college fraternity. The men belong to a fraternity with a reputation for being the rowdiest at the nearby university. They are led by the handsome and hot Teddy Sanders (Zac Effron – practically playing himself). He’s intent, in his year as Fraternity president, on getting his term as president on fhe fraternity’s wall of fame. Helping him to break party records is his second in command Pete (Dave Franco – younger brother and lookalike of James Franco). 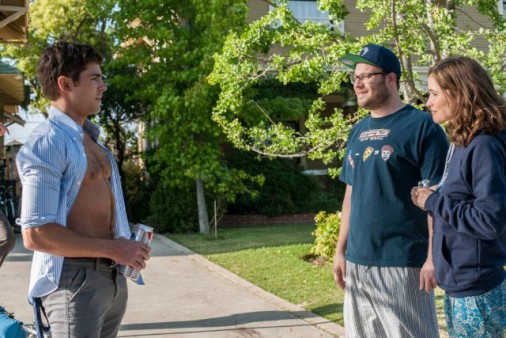 Mac and Kelly and attempt to make peace with their new next door neighbours by greeting them when they move in. They also casually and cautiously tell them to keep the noise down. The boys agree, on the condition that if they are making too much noise, that Mac and Kelly should call them first instead of calling the police. So for a short time they are very friendly neighbors, where Mac and Kelly go over and hang out and get stoned, reliving their college days, oh not too long ago. Then one night the frat house hosts a massive party, very loud music, lots of lights, fireworks, and with many college kids spilling out of the house. Mac and Kelly call the cops anonymously, but when the cops arrive, they tell the boys that it was their next door neighbours (Mac and Kelly) who called to complain. Caller ID! 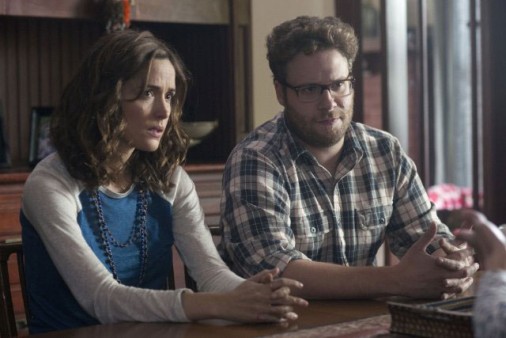 This leads to a campaign by the boys to retaliate against the Radners. And retaliate they do. They don’t stop having parties, in fact their parties get wilder, including pool parties in a newly-built pool in their backyard, complete with scantily clad young men and women. Another of their retaliation techniques is to remove the airbags from Kelly’s car into cushions in their house and in chairs at Mac’s place of business. How they got into the car, into the house, and into Mac’s place of business is not explained. What are the Radner’s going to do? They can’t raise cutey Stella living next door to these crazy bunch of college kids? Should they move or continue to complain to the police? They do neither and decide to play along with them at their own game.

Neighbors is actually a very funny comedy, with lots of college jokes about girls, penises, sex, penises, etc…and you will enjoy it if you are into that kind of humor. And the boys, especially Effron and Franco, don’t have much to do except stand around, most of the time with their shirts off, and tell the other boys what to do. They also focus a lot on their penises, as we can presume most college guys their age do. But Rogen and Byrne save the movie. They have great onscreen chemistry and they make a perfect couple, and their adorable baby makes them a perfect family. Neighbors could actually be split into two movies, one about the the Radners and one about the Frat House – I would actually pay to see them both. But Neighbors will make you laugh for most of its 97 minutes (for some reason it feels longer than that), and you will secretly hope that Effron will continue to have his shirt off for his next few movies, or at least until he turns 50.