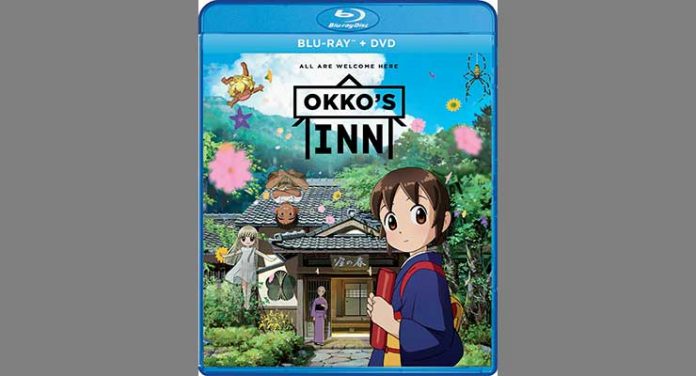 Kosaka Kitaro, who was one of the key animators at Studio Ghibli, directs Okko’s Inn, an anime feature film based on the series of series of Japanese children’s novels, written by Reijo Hiroko and illustrated by Asami.

In the grand tradition of Studio Ghibli films, this particular film, from anime studios DLE and Madhouse and distributed here by GKIDS/Shout! Factory, is a supernatural coming of age story about a young elementary school-age girl, Seki “Okko” Oriko. After losing her parents in a car accident Okko goes to live with her grandmother who runs a traditional spa in the countryside near an ancient spring the locals say have healing powers. When she first arrives, Okko is out of place, un settled, afraid of everything – a spider sends her running, a gecko on the outside of the window in her bedroom starts her screaming. Soon Okko discovers there is more to the old inn than meets the eye, as in there are ghosts there that only she can see. Her near death experience left her able to see them. They become her friends and help her cope with her new environment, which is just what Okko needs. She begins to help her grandmother at the inn, determined to become a gracious host and to be able to take over the inn one day, just as her parents had done, but when she begins to encounter a number of troublesome guests, each with their own story, it becomes overwhelming for her. It’s the help of her paranormal friends that helps to get her through it all.

Okko’s Inn is a beautifully animated film with a heartwarming story. Standout characters like Okko’s classmate Akino Matsuki, whose family runs the elegant rival spa in the town and whom the kids call “frilly pink” because of the fancy pink Lolita Goth clothing she wears offer a wonderful bit of comic relief as well as visual contrasts. The script also has a good arc for the protagonist in its limited ninety-five-minute run time, having her growing from an uncertain orphan to a determined junior innkeeper with a group of friends, real world and otherworldly.

Okko’s Inn hits Blu-ray in an AVC 1080p encodement framed ant 1.77:1 and the digital animation really ‘pops’ in this transfer. The image is clean, crisp, and almost three-dimensional, with superb shadows details and no hint of artifacts.

Okko’s Inn comes to Blu-ray with the original Japanese language audio track in DTS-HD Master Audio 5.1 and an English dub also in DTS-HD Master Audio 5.1 in addition to English Audio Description 5.1 and French 5.1 mixes. The sound quality is excellent for both the Japanese and English lossless DTS-HD Master Audio tracks, with clean dialogue, wide dynamics, and judicious, yet satisfying use of the surround channels. There is a thoughtful use of atmospheric effects such as the sound of breeze rustling through trees or insects buzzing through the surround channels and when need be, there are more solid effects. Early in the film during the car accident scene, we hear some of this sort of activity, then the laidback subtilty of the spa which dominates the film but fits the overall atmosphere of the film.

The interviews and Q&A’s with the Japanese cast and crew for Okko’s Inn offer up lots of info and the trailers provide more looks at the beautiful artwork.

Okko’s Inn is a quaint and heartwarming film that wraps together all the best of what Kosaka obviously gleaned from his time at Studio Ghibli into this family friendly coming of age story. It is presented gorgeously on Blu-ray from GKIDS and comes highly recommended!

Okko’s Inn is out on Blu-ray Combo Pack July 2, 2019 from GKIDS/Shout! Factory

4.2 / 5 TheaterByte Rating
{{ reviewsOverall }} / 5 User Rating (0 votes)
DLE | MadhouseAnimation Studio
Shout! Factory | GKIDSDistributor
Kosaka KitaroDirector
Yoshida ReikoWriter
95 Mins.Run Time
2 Jul. 2019Release Date
$26.99MSRP
1.77:1Aspect Ratio
AVC 1080pVideo
Japanese DTS-HD MA 5.1Audio
English DTS-HD MA 5.1 | English Descriptive Audio 5.1 | French DD 5.1Secondary Audio
English for Original Language Version | English SDH | French | SpanishSubtitles
PG (for thematic material)Rating Certificate
The Story
The Animation
The Video
The Audio
The Dub
The Supplements
Summary
An orphan goes to live with her grandmother who runs a spa in the countryside near an ancient spring said to hold powerful healing powers and there she not only discovers supernatural beings that become her friends and help her cope with her new circumstances, but she learns about her inner strength. Directed by Kosaka Kitaro, who was one of the key animators at Studio Ghibli, Okko's Inn is a beautifully animated and heartfelt anime film great for the whole family. The Blu-ray presentation from GKIDS/Shout! Factory is pure reference/
What people say... Login to rate
Order by: