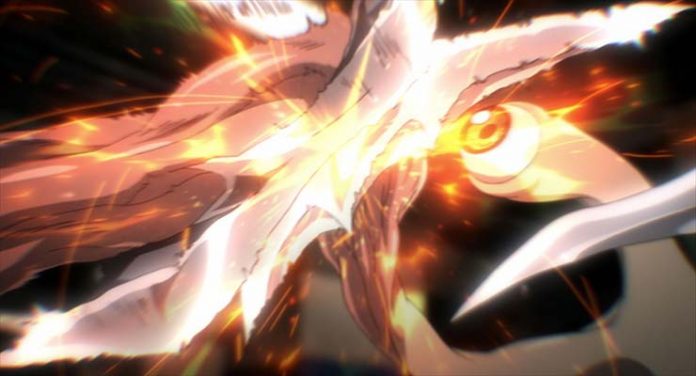 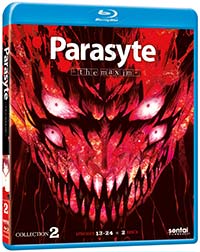 Based on the science fiction horror manga series written and illustrated by Iwaaki Hitoshi, Parasyte: The Maxim follows the once average high school student Izumi Shinichi, whose right hand becomes infected by an alien parasite. Calling itself “Migi” (right), the parasite, which failed to take over Shinichi’s entire body, instead becomes the first alien to develop a symbiotic relationship with its host body, and Migi and Shinichi begrudgingly develop a friendship and partnership in an effort to fight off other parasitic aliens that mean to harm them and take over all of humanity. In fact, Shinichi slowly begins to think, or realize that the survival of humanity may well depend on him and his ability to harness his newfound strength, thanks to his emotionless parasitic right arm, and kill the alien parasites taking over human bodies all over. But his new condition is coming at a cost. After a particularly tough battle against one of these aliens, Migi is forced to save Shinichi’s life by sending small bits of himself throughout Shinichi’s bloodstream. The cost is Shinichi’s emotions may be lost. The first to notice this is his girlfriend Murano Satomi.

Collection 2 picks up with Shinichi at first seeming a bit more balanced and comfortable in his body, but it doesn’t take too long for things to start to go horribly wrong as he finds himself the target of a seemingly unstoppable parasite whose powers Migi’s are no match for. One of the stranger turns in the second half of this series is the evolution of the parasitic character Tamura Reiko. Reiko started out as one of Shinichi’s teachers, an undercover observer, as viewers of the series will recall, and she seems to have always been set apart from most of the other parasites as more of a thinking character. She killed Shinichi’s parents, and even though offered him and Migi a free pass, if you will, simply so she could observe them, she has always seemed somewhat of a threat. Now, having given birth to Mr. A’s baby, she starts to actually grow attached to the human child beyond merely an observational capacity.

Without giving too much away for those who may not have seen the entre series already, I think that Parasyte succeeds on multiple levels, especially after wrapping up episodes 13-24, because it explores on psychological level the definition of being human. Are the parasites human or not? Does it require having emotions to be human? Because you have other biological entities residing in you and perhaps controlling some of your thoughts, does it make you less human? Shinichi goes through a crisis in these episodes – a crisis of self-doubt, of what it would mean to live without Migi, after so long wishing he could. Is Shinichi fully human, half-human, or not human at all?

We get more of the same of what Sentai Filmworks delivered with Collection 1 at the end of last year with this fine transfer of Collection 2. The eye-popping digital animation for Parasyte is once again presented in an AVC 1080p encodement that is free from major flaws, is crisp and nuanced, and suffers only from slight hints of color banding in some of the darker areas.

Parasyte is one of the rare releases from Sentai Filmworks that comes with an English dub in 5.1. That said, while the DTS-HD Master Audio 5.1 track in English is very enjoyable and entering, though not close to being on par with the best reference releases for some of the Hollywood blockbuster films on disc, the English cast just doesn’t compete with the Japanese cast on talent. The Japanese mix is provided in the standard DTS-HD Master Audio 2.0 stereo, and while this mix does collapse a bit after hearing the 5.1, it is no slouch. For the 5.1, the often pulsating electronic score courses through each channel and engulfs you in lush, atmospheric sounds. The dialogue is full and clear, and there’s a good amount of low-end. But the Japanese DTS-HD Master Audio 2.0 stereo track is very good for a stereo mix also. As is often the case with Sentai releases, the dynamic range is excellent and we get a good bit of stereo spread plus clean dialogue as well.

There is nothing beyond the clean openings and closings and additional Sentai Filmworks trailers.

The second collection of episodes is an amazing wrap-up to this psychological paranormal fantasy series. Parasyte – The Maxim hits on many levels, be it the character development, the animation, or the plot. Sentai Filmworks’ Blu-ray is an excellent release.