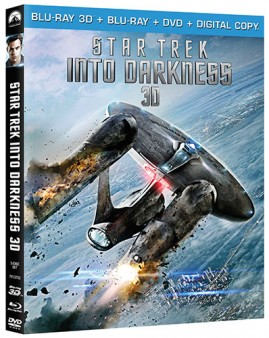 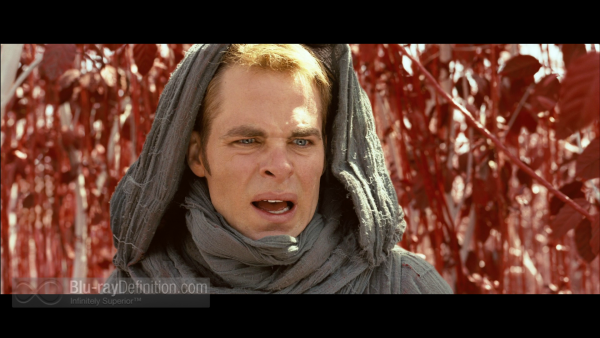 J.J. Abrams returns with another entry in his reboot of the Star Trek franchise with the marvelously rich and slickly produced Star Trek Into Darkness. Despite the grim tone of the title and some of the dire circumstances our usual heroes find themselves in in the film, the screenplay by Roberto Orci with Alex Kurtzman and Damon Lindelof with the direction by Abrams offers a dazzling, attention-grabbing set of action pieces that maintain the alternate timeline Abrams setup in the 2009 reboot, while reaching back into the annals of Star Trek canon.

The film begins with a classic “Away Team” throwback scene with Kirk (Chris Pine) and Bones (Karl Urban) on an exotic Minshara Class planet trying to escape a primitive civilization as they run through the tall, red vegetation, Spock (Zachary Quinto), making his way into the depths of a volcano to stop the total destruction of the entire civilization, in direct violation of the non-interventionist Prime Directive.

This opening, however, is a misdirection, the real story has yet to begin. That only comes once the crew returns to Earth and a terrorist bombing is carried out against a Federation electronic archive. A radical (Benedict Cumberbatch; TV’s Sherlock), takes responsibility, and an Admiral, Marcus (Peter Weller) pushes a plan for a secret mission to pursue him into Klingon territory and carry out an execution without trial, against Federation law. Kirk’s Enterprise is put in charge, and they carry a payload of secret weapons to carry out the task. Their target, as it turns out, is superhuman Khan, a genetically engineered super-soldier, to be exact, released from a 300-year cryogenic sleep by someone high up in Starfleet command to help militarize the organization and gear up for a war against the Klingon Empire. Khan is now on the hunt for his friends, cryogenically sealed inside the Federation, and he will use his superior intellect and strength to leverage Kirk and the crew of the Enterprise in order to get them back.

With big explosions, quick pacing, and allusions to the old Star Trek films (one scene borrows a favorite line from The Wrath of Khan and lends it to a surprising character under the perfect circumstances), Star Trek Into Darkness takes all the strong points of J.J. Abrams’ original reboot, and ups the ante, adding in the perfect antagonist in Cumberbatch as Khan, who plays it up with the right amount of menace.

The changes to the timeline may have some longtime Trekkies longing for the days of old, but nothing here strays too far off base and would fit in with an alternate reality, but, then again, if you’re thinking that hard about the details of a Star Trek film, then you’re just thinking too hard. The bottom line here is, the character development and interaction is rather spot on, from the comic relief of Simon Pegg’s Scotty to the casual banter between Mr. Spock and Captain Kirk, which is lighthearted when need be, and intense when the situation requires.

If Star Trek Into Darkness has any flaws, it is that the film can at times feel just a little disconnected, like a series of set pieces struggling to tie itself together thematically and stay in line with classic Star Trek, but it never collapses, thanks to Abrams’ direction. 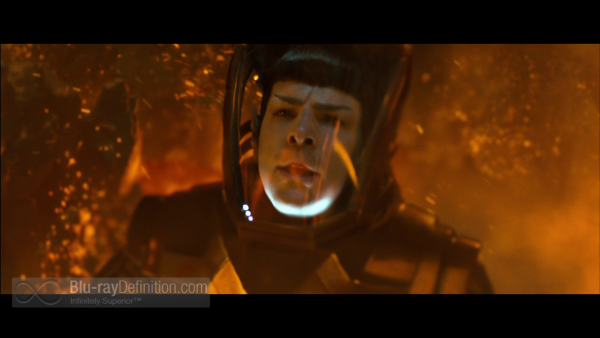 Star Trek Into Darkness is a hodgepodge production along the lines of The Dark Knight Rises. It was shot on a combination of 35mm and 65mm IMAX, with some shots even being done on the Red Epic in high definition. What is worth pointing out is that it is not a native 3D production. That being said, it is one of the better 3D conversions you will see, having a natural appearance and depth with little in the way of artificial artifacts or “cardboard cut-out” syndrome. The 2D transfer is the better way to go here, however, since it really portrays the beauty of the anamorphic production (look at those brilliant lens flares), the sharp grain texture, and the gorgeous colors of the Starfleet uniforms. 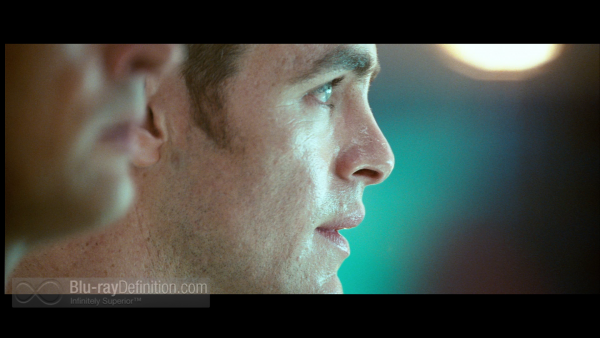 It may not be as immersive as the Dolby Atmos mix that was available in theatres, but this Dolby TrueHD 7.1 (48kHz/24-bit) comes darn close enough for a home theatre mix. It is downright mind-blowing from the opening scenes, with rollicking lows, aggressively mixed surrounds and surround back channels and crystal clear dialogue. Dynamic range is superb and the high frequencies are nice and airy. 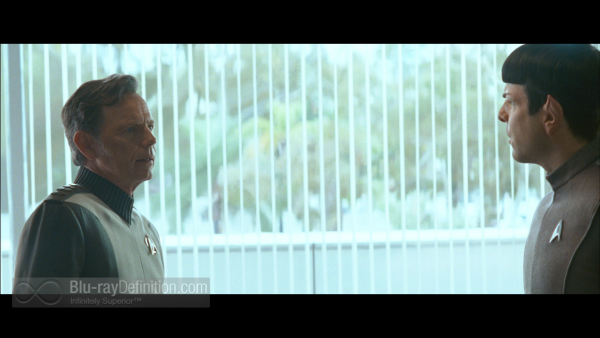 We get a series of production featurettes with numerous behind-the-scenes shots and interviews with J.J. Abrams and other cast and crew that break down various crucial plot points and scenes from the film. All are on the Blu-ray 2D disc. 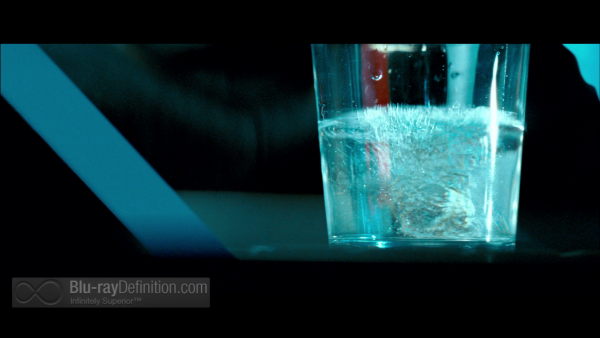 Get ready to be dazzled by non-stop action, a menacing villain, glistening lens flares, and colorful sets with J.J. Abrams’ Star Trek Into Darkness, his latest entry in his alternate timeline Star Trek canon reboot. The sound and image are pure reference on this Blu-ray. Highly recommended. 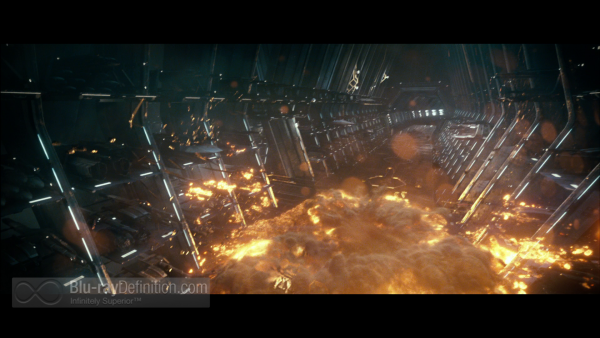 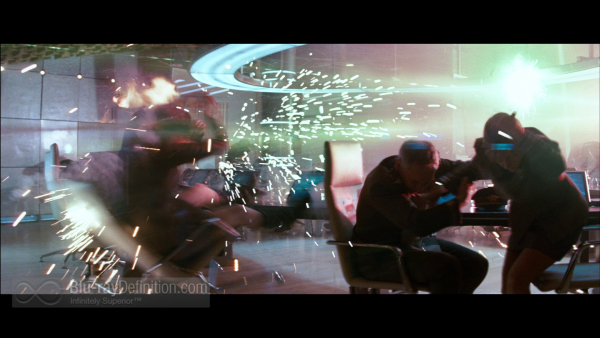 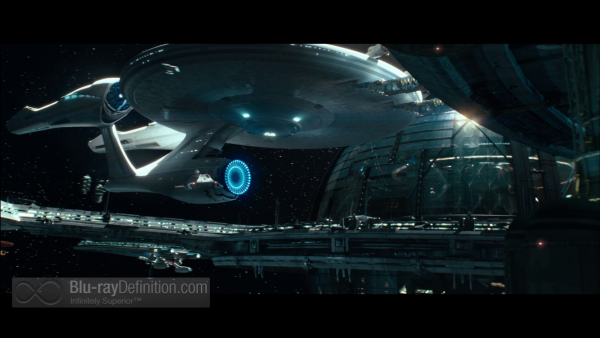 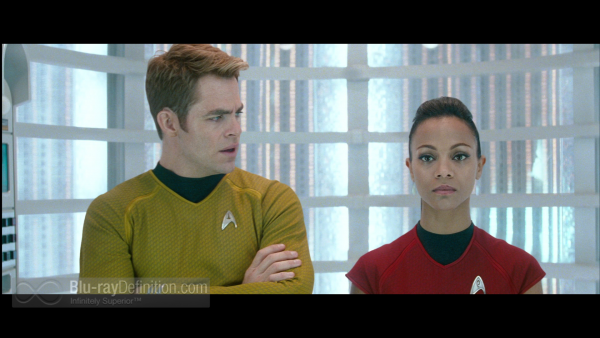 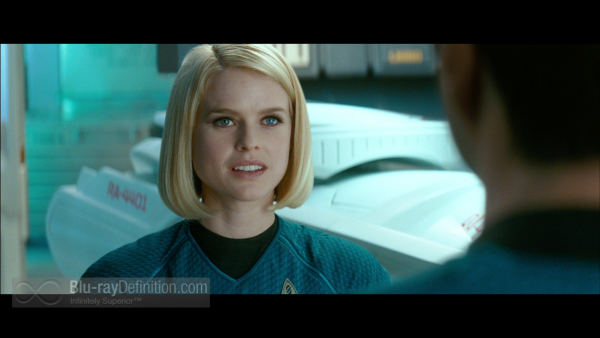 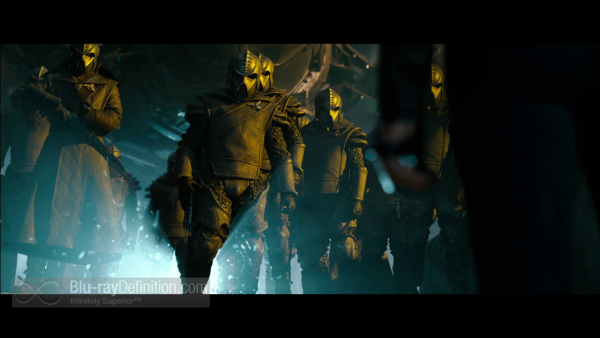 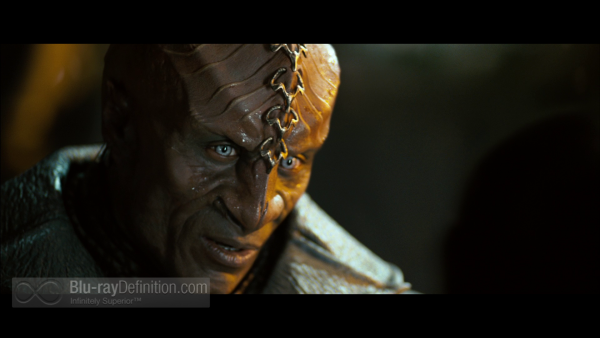 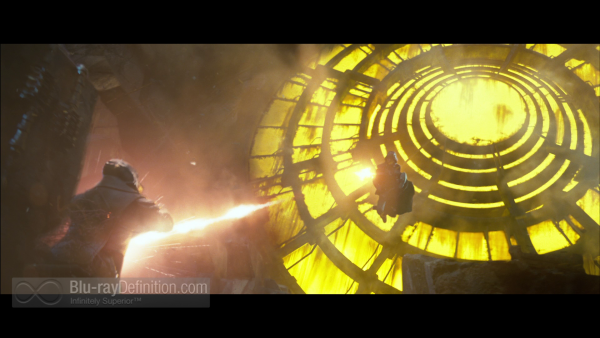 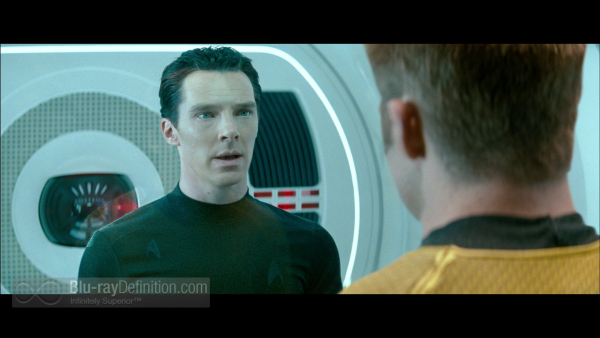 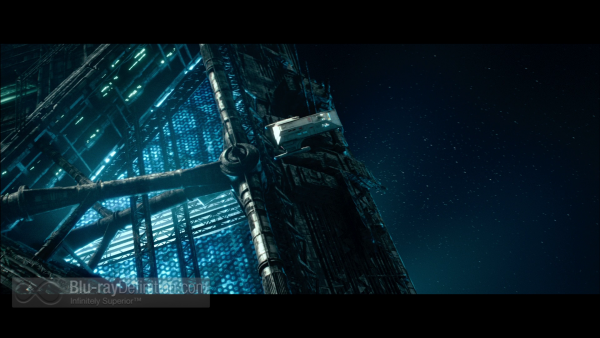 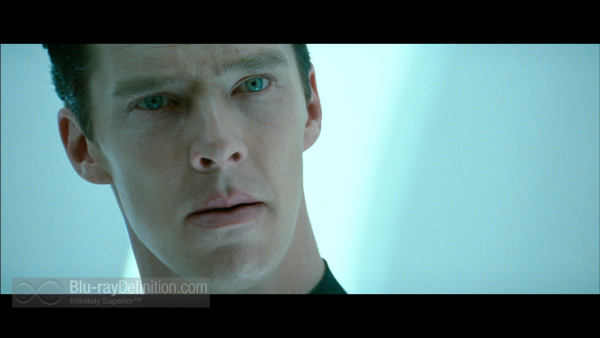 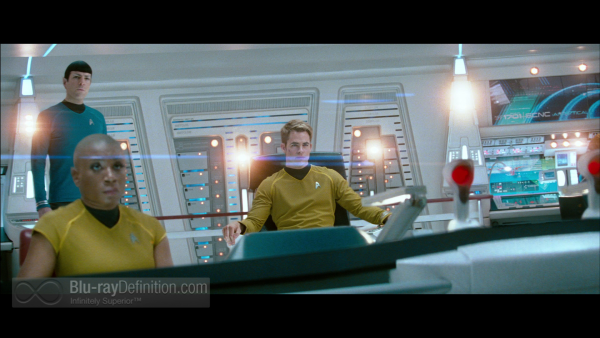 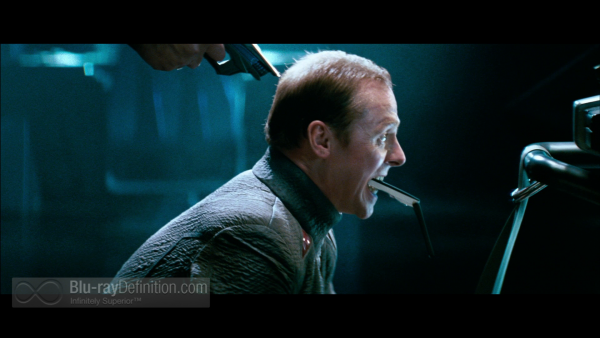 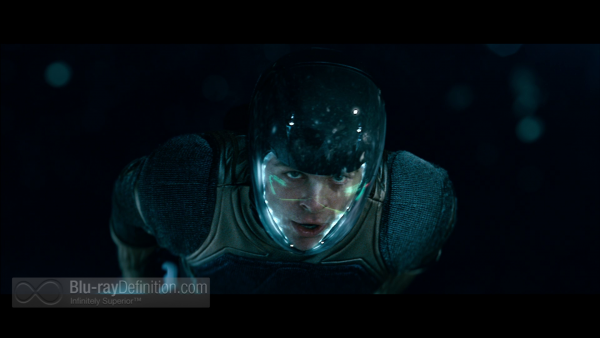 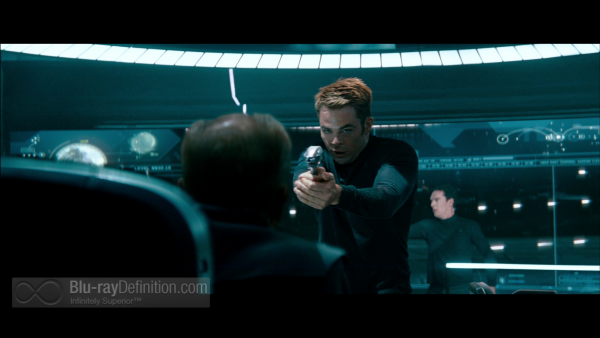 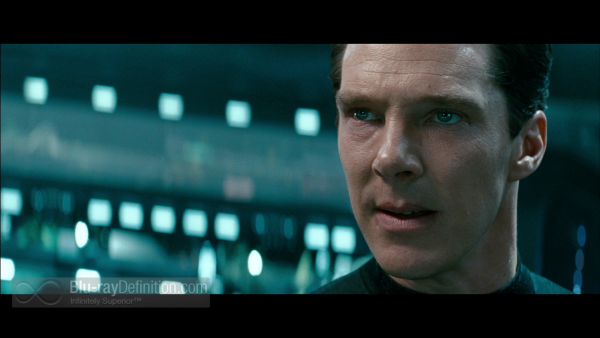 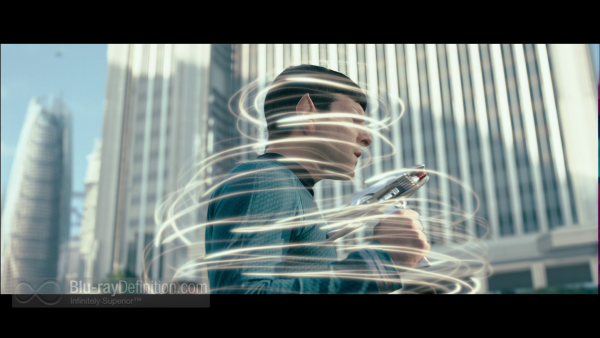 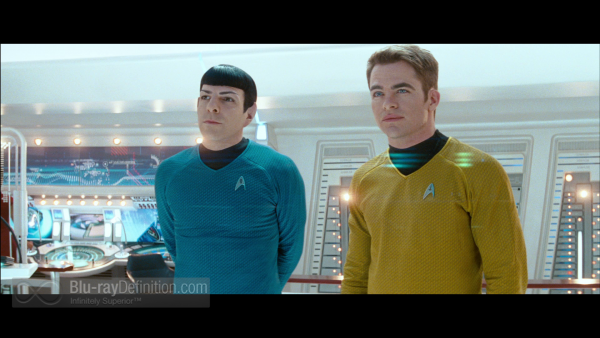