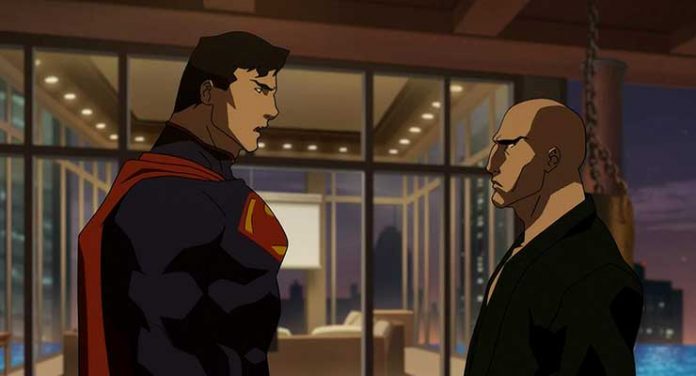 In this film, the first part obviously covers The Death of Superman, wherein Superman, hero to the people of Metropolis, is now in a relationship with reporter Lois Lane as his alter-ego Clark Kent, but Lois doesn’t yet know he is Superman. Meanwhile, his arch enemy Lex Luthor, angered that Superman has garnered so much praise and adoration, plots to undermine and destroy him, synthesizing a technology using Apokoliptian and Earth elements. But the real threat comes when a giant astronaut birthing a humanoid creature, dubbed “Doomsday” by Jimmy Olsen emerges. The creature proves too much for the members of the Justice League to contain and even Superman seemingly sacrifices the ultimate to defeat it – his life – as Lois looks on.

The second part of the film encompasses both “Funeral for a Friend” and “The Reign of the Supermen!” as Metropolis, reeling from the death of their hero, and crime now on the rise, begins to witness the appearance of strange, Superman-like heroes, Superboy, Steel, Cyborg Superman, and the Eradicator, returning to fill the void. Is it really Superman returning, or do they have some nefarious purpose? At least one of them, a youngster everyone insists on calling “Superboy” despite his protestations is connected to supervillain Lex Luthor. Meanwhile, people start to wonder, is Superman really dead? And Lois, having learned Clark’s secret, begins to investigate on her own, with a little help from Wonder Woman

This film truly is “epic” in the greatest sense and feels completely seamless. Whereas the first release felt as if it was purposely ended on a cliffhanger for the sequel to come, this finally completes the journey and the creators bring both together without a hitch. We get a sledgehammer to the head of action sequences, eye-popping graphics, and a sound effects to match. Although the outcome is never really in doubt – come one, did we ever REALLY believe Superman was dead? – the plot does keep us involved and the voice acting is really good from a cast of top notch players such as Jerry O’Connell (Superman), Rainn Wilson (Lex Luthor), Rebecca Romijn (Lois Lane), Nathan Fillion (Green Lantern), Christopher Gortham (The Flash), and Rosario Dawson (Wonder Woman).

The Death and Return of Superman hits 4K Ultra HD in a 1.78:1 HEVC 2160p (4K) with HDR10 encodement. The colors of the digital animation ‘pop’ wonderfully and the explosions have an extra bit of nuance thanks to the wide color gamut. There can be some noticeable scanlines if one looks closely at the color fills in some areas, but otherwise this looks crisp and clean, although the Blu-ray has a bit of a cleaner overall look, just with a less vibrant color palette.

The Death and Return of Superman comes with a rather rollicking English DTS-HD Master Audio 5.1 mix on 4K Ultra HD Blu-ray. Warner has yet to mix any of this DC Universe movies in one of the immersive, object-oriented formats like Atmos or DTS:X, but their 5.1 mixes have been very good and this one is no exception. There’s good low-end extension that gives the subs a little bit of a workout during the brawls, natural high-end, clear dialogue, and lots of mixing of sound effects through the channels. The score is also expansive and airy.

This Limited-Edition collection is packed to the hilt with featurettes, episodes from the DC vault, a 4K disc of the 2007 adaptation of the DC comics crossover story, Superman: Doomsday.

One of the better DC Universe original animated films, The Death and Return of Superman is action-packed, looks and sounds great, and is packed with bonus materials. The Limited-Edition comes with a cool, collectible Steel action figure.

The Death and Return of Superman Limited-Edition Gift Set is out October 1, 2019 from Warner Bros.