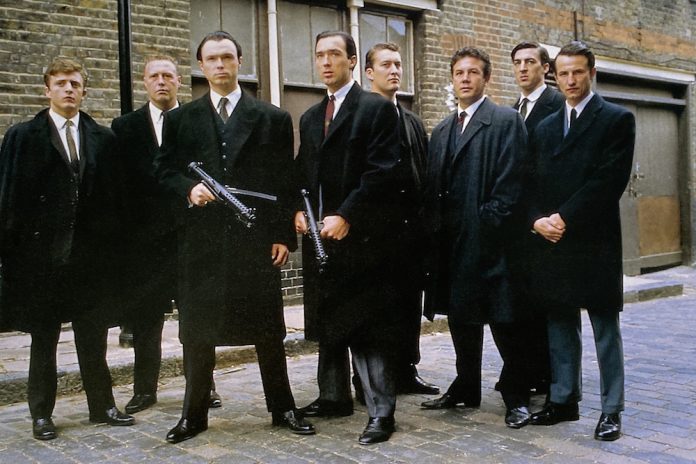 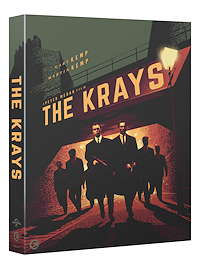 Peter Medak crafted his biopic The Krays about the infamous twin gangsters who ruled 1960s East End London from the screenplay by Philip Ridley. The brothers Gary Kemp and Martin Kemp, founding members of the ‘80s pop group Spandau Ballet, step into the shoes of the maniacal Kray Brothers and do not skip a beat given their own background growing up in a lower-class London neighborhood and taking acting classes.

Reggie (Martin Kemp) and Ronald (Gary Kemp) Kray grow out of the lower class 1940s East End of London raised by their take-no-guff mother Violet (Billie Whitelaw), upon whom the film opens as she recounts a dream in which she saw a swan from which two beautiful babies were delivered, but she is mystified as to whether they are angels or demons. As Reggie and Ronald grow up it becomes quite clear which ones the twins are as they begin bullying other schoolboys and at the age of seventeen beating each other to a pulp in a boxing match. Eventually, the twins, who seem telepathically linked in their behavior, take over a small-time hood’s territory and veer off into the underground crime world of protection rackets and running posh nightclubs, driving fancy cars, and wearing Saville Row suits. All the while, their level of violence keeps ratcheting up, especially when brother Reggie falls in love with the beautiful Frances (Kate Hardie), causing Ronald to go into a jealous rage over losing his brother’s full attention and love and driving his violence into a new gear. Ronald eventually starts a gay affair with one of his underlings and the two continue to rule the 1960s crime world until it eventually all comes crashing down around them.

Medak’s film is gorgeously shot, hitting the period brilliantly with an eye on the detail for costumes, closeups, and a drab, almost sepia tone color palette at times that really makes us feel like we are in the past. The Kemp brothers eerily portray the Krays unhinged, mamma’s boy personas with an icy cold veneer, and Billie Whitelaw is just perfect as the mother of the two infamous criminals. Where the film goes astray a bit is in the screenplay from Philip Ridley who spends a bit too much time on the Krays’ childhood where little if anything happens and the fact that the story arc plays more like a rush from one vignette in the life of the Krays to the next, rather than one smooth story. Other than that, this is a satisfying and by all accounts quite accurate portrayal of these two criminal brothers.

The Krays arrives in a 1.85:1 AVC 1080p encodement on Blu-ray from Second Sight Films. I don’t see that this is a brand-new restoration, and it doesn’t look like one. The film grain is somewhat coarse and there are some spots where lens and film debris can be spotted. Depth of field is somewhat middling as detail trails off in the backgrounds becoming a bit soft, but closeups and midrange shots look good and flesh tones and the numerous earth tones look wonderfully rich.

The Krays has a lossless DTS-HD Master Audio 2.0 stereo mix that has clean dialogue and wide stereo effects such as the sounds of people speaking in the Krays’ club or music playing across the soundfield. The dynamic range is good and midrange punchy.

This limited-edition collection comes with a strong slate of special features and collectible contents. I enjoyed both audio commentaries. They are both different styles. The commentary by film historian Scott Harrison is more casual, but very informative, even starting with a little history of the Universal logo. In the commentary with director Peter Medak, he gets a little more technical. You shouldn’t skip any of the included interviews, but especially check out the BFI Q&A.

Second Sight Films brings a packed limited edition of this 1990 minor British ‘90s classic to Blu-ray and it’s well worth watching for entertainment and reassessment. Recommended.

The Krays: Limited Edition is out on Blu-ray in the UK 12 July 2021 from Second Sight Films